The Vauxhall GT concept has been shown off ahead of the car's global debut at the Geneva motor show.

The two-seat coupé concept is described as "a template for future sports car" and is broadly similar in size and mechanical layout to a Mazda MX-5 but has ultra-modern, flowing lines and a fixed roof. It is so pared down and “unashamedly avant-garde” that it doesn’t even need door handles or exterior mirrors. It does, however, employ the classical long-bonnet, short-boot proportions used by ‘emotional’ rear-wheel-drive sports cars through the ages, although its mechanical components are distinctly modern.

Vauxhall says the car's infotainment system is operated purely by voice control, but a touchpad controller is included as a backup. The voice-controlled system is described as being able to learn a driver's habits or adapt to their needs, and can even respond vocally to commands. Vauxhall says its Human-Machine Interface can even select appropriate music for passengers.

The instrument clusters can display 3D content in a variety of colours, a development of the system first shown on 2013's Monza concept. The system displays different content depending on the situation. At high speed, for example, the system displays g-force values. The system can also issue spoken warnings on upcoming obstacles. As on many concept cars, the GT eschews traditional door mirrors in favour of cameras.

Vauxhall-Opel design chief Mark Adams, who led the project, said the GT Concept unashamedly pays homage to two influential European concepts of the mid-1960s - the Vauxhall XVR and the Opel Experimental GT - both of which had a big influence on the design of the production cars that followed.

In particular, the Vauxhall XVR - a long-nosed coupé produced under legendary British design boss Wayne Cherry - used and refined design influences from the US-built Mako Shark II concept of 1963, which six years later went into wide circulation in the Chevrolet Corvette C3. Then came the Vauxhall Equus, another promising Cherry design, plausibly based on the Chevette city car.

As well as echoes from the past, this latest GT Concept also carries influences from Vauxhall-Opel’s Monza sporting estate, a 2+2 plug-in hybrid concept shown at the Frankfurt motor show in 2013. Company officials admitted at the time that the car might eventually be the precursor of a new-generation Manta in production.

The Vauxhall Corsa is very refined, stylish and practical. Engines are not so good 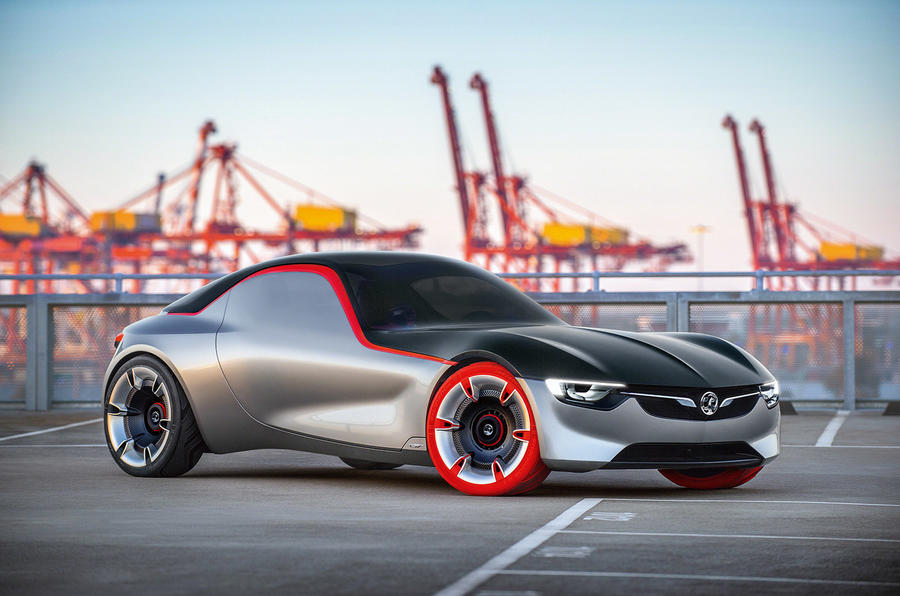 “It’s difficult to reinvent iconic concepts like these,” said Adams of the Vauxhall XVR and Opel GT, “but just as each of them was avant-garde back then, so is this GT Concept today. It’s pure and minimalistic, yet bold and uncompromising.”

Adams believes the car “impressively demonstrates the continuous development of our design philosophy”.

The GT Concept’s rakish looks are backed by a very contemporary mechanical package. The 1.0-litre, all-aluminium 144bhp engine (used in various guises in the Adam, Vauxhall Corsa and Vauxhall Astra) also packs an impressive 151lb ft of torque in the GT’s turbocharged form. Ready for the road, the GT is tipped to weigh less than 1000kg.

A 0-62mph time of less than eight seconds and a 134mph top speed are promised.

Perhaps the GT Concept’s most striking design features are the large doors, whose side windows integrate seamlessly into the body surface without the need for conventional sills. They are opened via roof-mounted touchpads in the red signature line, which flows on either side from the GT’s eye-catching red front tyres, along the tops of the front wings and over the roof on to the rear, enclosing a see-through roof.

Another unique feature is the GT’s use of integrated headlight/indicator units that develop the technology used for the new Astra’s glare-reducing IntelliLux matrix lighting to its next level.

The large doors have space-saving hinges ingeniously mounted in the front wheel arches that allow the door to open wide, even in tight parking spaces.

Although most observers will see the GT Concept’s use of red front tyres, mounted on ‘rollerskate’ wheels, as an avant-garde feature, they are also a subtle reference to an iconic Opel motorcycle from the 1920s called the Motoclub 500, which had red tyres front and rear. 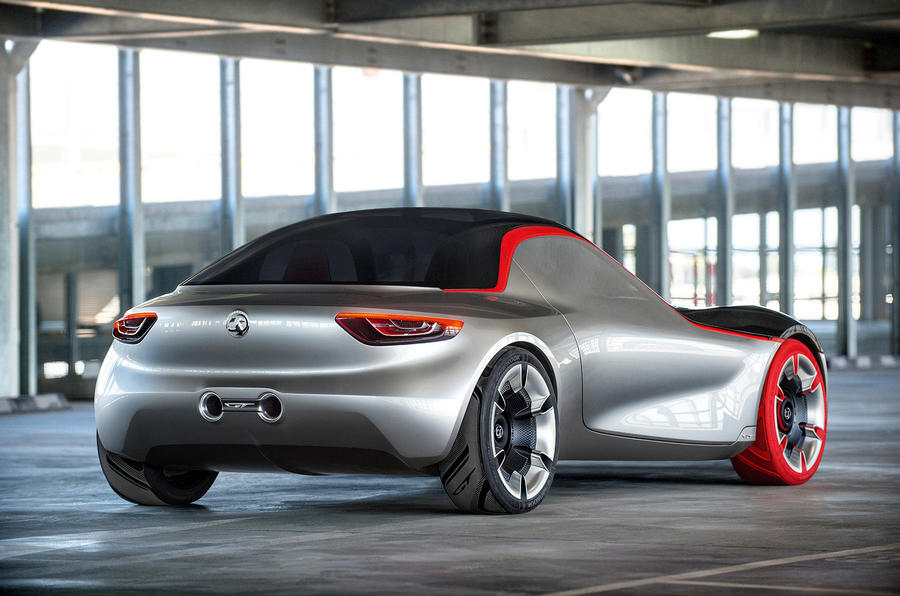 The wheels are steel, which is lighter and cheaper, and can have clip-on centres to provide different looks. The wheels are 18in, the same as an Astra’s, with relatively modest rubber. But because the car is small and relatively narrow, they look fairly large.

The square steering wheel is intended to imply a quick-rate rack of variable ratio, enabling you to perform most manoeuvres without the need to take your hands off the rim.

Vauxhall-Opel bosses are saying very little about the GT Concept’s prospects for production. Spokesmen say they have “heard of no plan” to build it, but they also say they will “judge reaction” to the car before deciding whether it has any production future.

“This car is something we really have an emotional connection too, not just as a car, but as what we want to do with the brand," said Adams.

At present, the company lacks a suitable front-engined, rear-drive platform on which to base a production GT. But Vauxhall-Opel has a history of putting rule-breaking sports cars into production. It turned the Opel GT from concept to production car in the late 1960s. It also built a Vectra-engined Lotus Elise in the 1990s and called it the Vauxhall VX220/Opel Speedster. Most recently, it turned the US Pontiac Solstice roadster into a second-generation Opel GT.

It’s too easy to conclude that Vauxhall-Opel will never build a front-engined, rear-drive sports car, such as the latest GT Concept,  just because the company doesn’t currently have a suitable platform with a front-mounted engine that drives the rear wheels.

Look through Vauxhall-Opel’s past products and you’ll find several that made production, even though there didn’t seem to be the right supporting infrastructure. The company has displayed a continuing penchant for sports cars and has been extremely resourceful about finding ways to get them built.

The most unlikely of recent times was the transverse mid-engined Vauxhall VX220/Opel Speedster, which was an expensive - and expansive - reworking of the Lotus Elise produced by Lotus at Hethel. The company decided its image for humdrum car design needed improvement and the VX lasted five years.

Even more recent was Opel’s second-generation GT, a badge-engineered, US-made Pontiac Solstice (itself a last-ditch attempt by Bob Lutz to spice up the Pontiac brand). It was a decent enough car, although Germany’s discerning buyers never really took to it.

Still, my point is that today’s car makers - Vauxhall-Opel high among them - can make unusual cars happen if they’re determined enough; witness Fiat’s deal to produce a 124 Spider that is actually a Mazda MX-5 underneath.

Vauxhall-Opel bosses say they will be “gauging reaction” to the GT at Geneva. Strikes me that unless they had the glimmer of a plan for production, they wouldn’t bother. 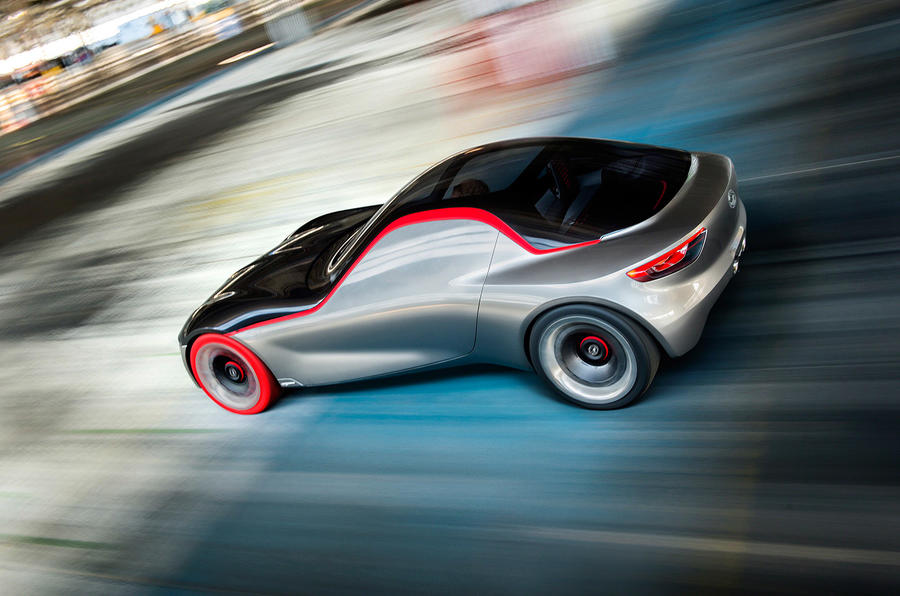 Why did you decide to build a sports car?

“The project’s origins go back to the 50th anniversary event we held at the Rüsselsheim design department. We had an Opel GT on display and we were all struck by how small and simple cars were 50 years ago. We decided to see if we could strike the same kind of simplicity and compactness again while meeting modern needs.”

You say you’ll be judging reaction to it at Geneva. Given you don’t have a front-engined, rear-drive platform, why would you bother?

“Even if we don’t build this car exactly as it stands, there’s plenty in it we might use in other applications. There are lots of emotional forms and connections in this car, and we’ll be interested to see which ones people like.”

Is there a sense that now SUVs are commonplace, emotional cars can make a comeback?

“There’s definitely some of that. SUVs continue to be extremely important, but there’s also a growing tendency in modern life for consumers to want to get back to a greater level of simplicity. Today’s cars are very complex, but we wanted this one to take simplicity and light weight to the next level.

Why the special door design?

“It’s an extension of our simplicity theme. I was keen to find a layout that meant we’d only have one cut-line for the door. We came up with a system where the door is quite large, but the hinge becomes a fulcrum, so part of the door goes inside the wheel arch as it opens. It works really well. The doors open wide in confined spaces, and they allow very good ingress/egress.”

Does the simplicity theme continue inside the car?

“It does. We’ve used exactly the same principles and made a big effort to free the car from clutter. It’s small, but it delivers a great feeling of openness and space.”

See the letter in this week's

See the letter in this week's 'Autocar'... Opel/Vauxhall should sit down with SAIC of China and GM in North America and do a deal to platform-share for a new Opel, Vauxhall, a 'proper' MG sports car and who knows, maybe even spin-offs like an Austin-Healey, a Chevrolet 'mini Stingray' and a Buick for China? It worked for Mazda and FCA, why not for GM and SAIC. A GM MG? If it comes to pass, remember you read it here first!
RCT V 18 February 2016

May I be the first to bring attention to the "Emperors New Clothes" ?! It looks AWFUL! Yes, it is new, and certainly "different". None of which mean it is an ATTRACTIVE, coherent, design :(
MG Writer 18 February 2016

Bring back the Opel badge for the UK maybe?