Students from Skoda’s Vocational Academy are developing an open-top Spider version of the Scala.

The as-yet-unnamed variant of the family car is due to be revealed in June and will be the seventh concept car produced by students on the Czech firm’s training scheme. Previous machines have included a Kodiaq-based pick-up and a convertible Karoq.

The Scala Spider is being developed by a team of 20 apprentices currently training at Skoda’s Mlada Boleslav headquarters, with guidance from design chief Oliver Stefani. Skoda engineers are giving advice to the team while the machine is constructed.

The Scala was launched in late 2018 and this is the first time the hatch has been used as the basis for a student car project. The students are given a standard version of the car and the design freedom to adapt it as they wish. Having decided on an open-top bodystyle, design work has focused on making the car’s lines more prominent to give it added ‘visual dynamics’.

The finished Scala Spider is scheduled to be revealed in June and there is no production intent for the car. 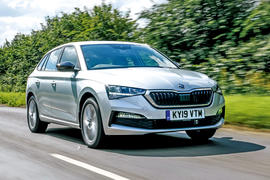 The concept pics look good, but, no front view?

The concept pics look good, but, no front view?

Its based on the Scala, it'll look like a Scala from the front.

these are great projects for the students, as a former Auto Eng student I'm envious!