BACK TO ALL NEWS
Currently reading: Renault Koleos axed in UK for ‘commercial reasons’
UP NEXT
Ferrari's 2022 performance SUV: first prototype caught testing

Renault has axed the Koleos SUV from its UK model line-up just three years after it first went on sale, the company has confirmed.

The model remains available to order on Renault’s website, but production of UK models will cease at the end of this month. A spokesman told Autocar the decision is “due to commercial reasons that align with Renault UK’s policy of offering the most suitable vehicles in the UK market for our customers”. It remains on sale in other markets, however.

The Koleos, reintroduced in 2017 following poor sales of the first-generation car, sits above the relatively popular Kadjar in Renault’s line-up. It is based on the Nissan X-Trail - as part of the Alliance platform sharing plan - but unlike that car, the Koleos is only available with five seats.  Just 1007 examples were registered in the UK throughout 2019.

Earlier this year, Renault announced a wide-reaching cost-cutting plan that will lead to the loss of more than 15,000 jobs, sparked by the major impact of the pandemic on finances and the need to invest heavily in electrification.

The brand will reduce its production levels over time, chasing profit over volume, and aim to develop “strategic business areas”.

As part of the restructuring, unconfirmed reports suggest a number of previously core models will not live beyond their current generation. The Koleos is one example, with the Mégane hatchback, Europe-only Talisman saloon and Espace and Scenic MPVs also rumoured for the chop.

A Renault UK spokesman told Autocar that the decision to axe the Koleos was not linked to the restructuring announcement, however, and was strictly based on the model's modest sales. 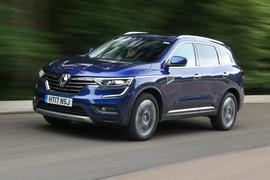 Renault’s new crossover sees the Koleos name return, attached to an SUV of a quite different stripe

Commercial reasons as in hardly anyone bought it in the UK. A large SUV without a premium badge is almost destined to sell poorly in the UK. While anything larger than a Golf-sized car from a French marque is more or less guaranteed to fail in the UK.

Fair point Saucerer, but why would you hamstring the car by not giving it the 7 seats unlike its Nissan cousin?

So Koleos has failed twice.....they dont seem to learn do they.....hopefully if they try again (history says they are bound to) they will add the jump seats and drop the rather unfortunate name.

KIA, Hyundai, Nissan, Skoda, etc. don't seem to have trouble shifting them? Not sure why Renault can't.

Why no Clio estate?

KIA, Hyundai, Nissan, Skoda, etc. don't seem to have trouble shifting them? Not sure why Renault can't.

Something I could never understand is why Renault UK don't import the Clio Estate found elsewhere in Europe. It has everything the high selling Clio has but with the added practicality that you can easily load push buggies etc. And what's more, to my eyes anyway, not only is it beter looking than the Clio hatch, it's one of the best looking of all Renaults. I think they missed a trick not importing it to the UK.

Apart from the ones that caught fire?

Apart from the ones that caught fire?

Much as I hate to defend GM, the ones that caught fire did so long after production of that model had finished,

they might have had more sucess if they had given us the Espace instead.

Not really surprised that the Koleus has been taken off the UK market,but if the Megane & Scenic are also facing the chop there's not going to be much of a range for the company to sell in the UK

Not really surprised that the Koleus has been taken off the UK market,but if the Megane & Scenic are also facing the chop there's not going to be much of a range for the company to sell in the UK

Presumably they think that all we need is the Clio, which has effectively replaced the Megane now, and a couple of smaller/medium SUVs and we're happy. And manufacturers keep saying how much choice we have these days...