BACK TO ALL NEWS
Currently reading: Production Volkswagen ID 6 SUV revealed in patent images
UP NEXT
New 2023 Audi A4 Avant undergoes tests in the Alps

The largest model in the growing Volkswagen ID electric car family, the ID 6, has been revealed in patent images registered with the Chinese government.

First previewed with the futuristic ID Roomzz concept SUV at last year's Shanghai motor show, Volkswagen's biggest EV will offer seven seats and place an emphasis on spaciousness. It will initially be sold only in China but could be rolled out to other markets in due course.

The models production designation is yet to be officially announced, but the Chinese government filings reveal that the name ID 6 will be used. The car is expected to be officially unveiled later this year.

The images, first published on a number of Chinese automotive sites, show the ID 6 will feature a design inspired by the smaller ID 4, albeit with larger headlights and more angular bodywork. 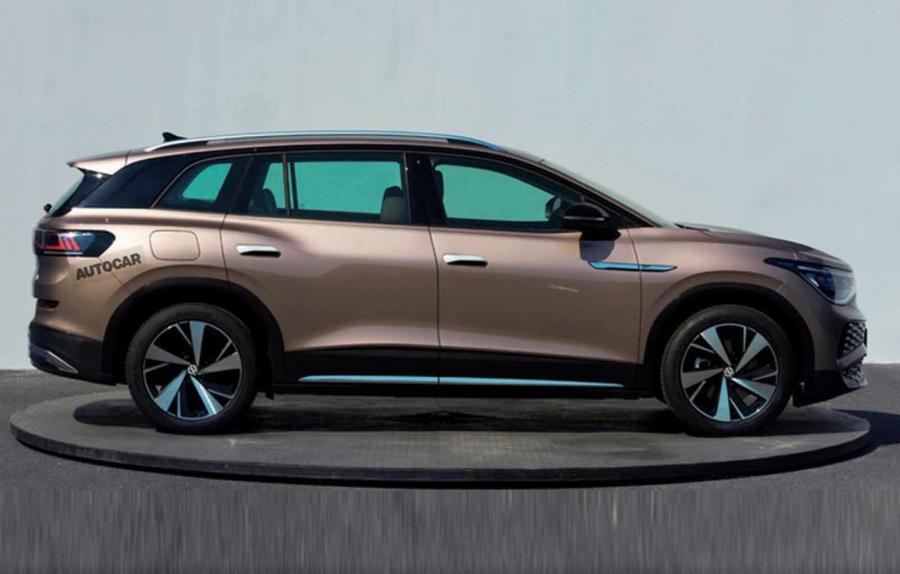 The ID 6 will be the largest model to sit atop the Volkswagen Group's MEB EV platform until the production version of the ID Buzz van arrives in 2022.

It can be expected to pack around 302bhp and 331lb ft from a dual-motor powertrain offering part-time four-wheel drive in its standard form.

The ID Roomzz concept had a claimed range of 280 miles per charge and could be charged to 80% in around half an hour from a 150kW rapid-charger.

The concept's sliding doors don't look to have made it through to the production car, given the prototype's conventionally placed handles, and nor do the camera-based virtual wing mirrors. It's possible, though, that the latter could be available on high-end variants, given that Volkswagen sibling brand Audi already offers them on its E-tron.

The ID Roomzz concept placed an emphasis on self-driving capability, with a retractable steering wheel and a pair of roof-mounted lidar units. The ID 6 is unlikely to be so equipped from launch, but Volkswagen is aiming to roll out Level 4 autonomous functions to all future ID models.

It can stay Chinese for all i care!

Really quite replusive. The front looks like an old Ssangyong, the rear has more layers than most cakes and the side just is just bland and seems to emphasis the bulk of the car. It's a bit depressing if this is the direction cars are going in.

The car manufacturers may have conned some people by hiding huge price hikes behind monthly finance payments, but who in their right mind, with the world in the state it is, is going to pay what this thing will cost, on finance or not?

With sales plummeting well before covid and even BREXIT, these manufacturers are on borrowed time if they think offering models like this are sustainable for continued growth.

I used to buy a new car every couple of years in the past, but my current car is now 6 years old and I won't be replacing it any time soon. I;m lucky that I can afford to, but I resent doing so, such is the extent of recent car price inflation and the great EV pricing scam.