8
Expectations are high for this five-seat electric SUV, which will be the firm's first truly global ID model. Does it live up to them?
Open gallery
Close

The new ID 4 is where Volkswagen’s ambitions for global EV sales leadership really begin to take shape. Due to be produced in four manufacturing plants on three continents, the new crossover-style SUV is seen by officials of the German car maker very much as a world car in the mould of the original Beetle and its successor, the Golf.

Following the smaller ID 3 hatchback, with which it shares its MEB platform, the second model from Volkswagen’s ID electric car sub-brand will initially be sold in the UK from February 2021 in single-motor, rear-wheel-drive guise. However, a more powerful, dual-motor, four-wheel-drive model, which is set to usher in the new GTX performance car nomenclature to be used by a number of future ID models, is also due to be added to line-up next April.

The contemporary styling of the ID 4, with its full-width light bands front and rear, will be familiar to anyone who has followed Volkswagen’s carefully choreographed entry into the electric car ranks. It takes the smooth-surfaced appearance of the ID Crozz concept, first wheeled out at the 2017 Shanghai motor show, into production with only minor changes.

It is a modern-looking car with short bonnet proportions unlike any existing Volkswagen SUV and large wheel houses that allow it to accommodate wheels ranging from a standard 18in up to 21in in diameter.

The drag co-efficient, meanwhile, is well below that of the Tiguan, at 0.28, aided by the almost totally enclosed front end and, on the model tested here, aerodynamically optimised wheel design.

Power comes from a rear-mounted electric motor known as the APP 310 and assembled at Volkswagen’s components plant in Kassel, Germany. It is the same synchronous unit used by the ID 3, offering three levels of power, starting at 146bhp and ranging through 168bhp to the 201bhp of the 1st Max specified version tested here – all with the same 228lb ft of torque.

Drive is sent to the rear wheels through a single-speed gearbox attached to the side of the motor, with an electronic differential providing a torque-vectoring function that varies the amount of drive sent to each individual rear wheel for improved traction and more neutral handling during all-out cornering.

The electric motor is fed by one of two available lithium ion batteries. The 146bhp and 168bhp models come with a 52kWh unit weighing 344kg, while the 201bhp model uses a larger 77kWh battery that weighs a rather substantial 493kg.

The latter is good for a WLTP range of up to 324 miles, according to Volkswagen. It comes as standard with an 11kW on-board charger, although it can support charging at up to 125kW, allowing a 199-mile extension in range within 30min on a high-powered DC system. 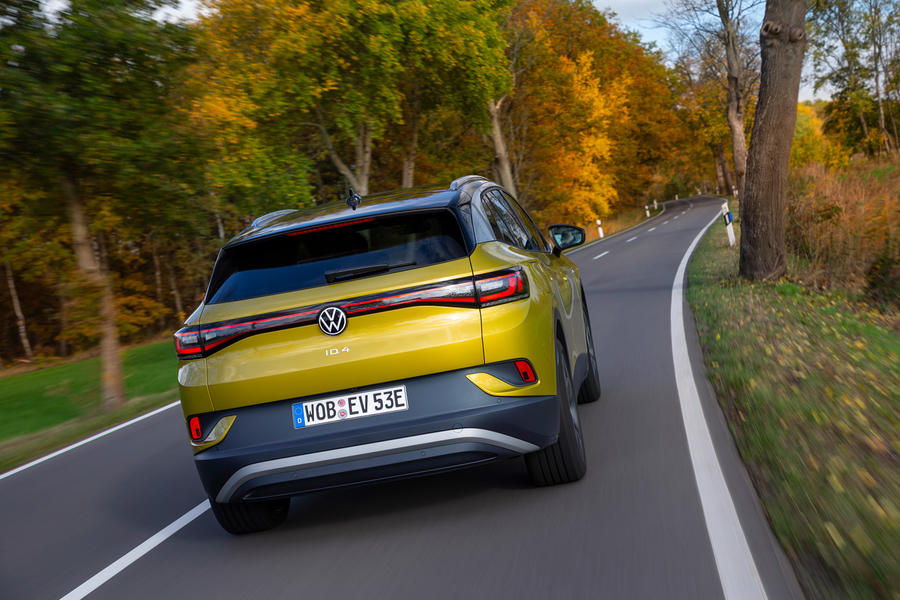 Despite tipping the scales at 2124kg, the instant-on torque of the electric motor provides the ID 4 with relatively brisk step-off qualities in either of its three primary driving modes: Eco, Comfort and Sport. At least up to 50mph or so. Beyond this, its performance is challenged by a combination of its relatively modest reserves and increasing aerodynamic drag.

That’s not to say it is in any way tardy. In fact, it always feels quicker than Volkswagen’s claimed 0-62mph time of 8.5sec suggests on the road. However, there is clearly scope for an increase in accelerative ability, which will undoubtedly come with the introduction of the dual-motor ID 4 GTX next year.

As with the ID 3, the driver can choose to alter the amount of regenerative braking via a pod-like lever mounted high up on an arm extending from the inner edge of the digital instrument display. D allows it to freewheel with a very light energy recuperation, whereas B offers one-pedal driving traits with noticeable energy harvesting and retardation on a lifted throttle, although not with the manual adjustment offered by some rivals.

Underpinning the new Volkswagen is a chassis that uses a combination of MacPherson struts at the front and a multi-link arrangement at the rear. All models receive passive dampers, although variable-rate dampers are available as an option and highly recommended.

There is plenty to like about the ID 4’s dynamic properties, which are pleasantly fluid and quite responsive. This is particularly noticeable around town, where its 10.2m turning circle provides the new five-seater with outstanding manoeuvrability and the sort of nimbleness usually associated with much smaller cars. In this role alone, it is extremely convincing.

A low centre of gravity provides the foundation for agreeably agile handling distinguished by light but accurate variable-rate steering that benefits from the drive being directed to the rear wheels, the ability to vary the drive between each rear wheel for optimal traction and, on models featuring the variable damping control used by our test car, excellent body control.

Because of the weight, grip is the limiting factor when you begin to push hard over challenging roads, although you can generate quite a bit of cornering speed before the stability control light illuminates to signal a breach of adhesion and subsequent reduction in the reserves dished out by the electric motor.

Overall, it is very competent and, with rear-wheel drive, quite entertaining. However, it lacks the tactility to be described as truly involving.

But while enthusiast drivers might want for greater involvement, they’ll have a hard time criticising the ID 4’s ride, which is smooth and controlled on well-surfaced German roads. We’ll need to put the new Volkswagen over UK roads before we can make a definitive call in this area, but those optional adaptive dampers provide impressive absorption of road shock, leading to a generally settled feel.

The brakes, too, feel well up to the job. They’re a combination of discs at the front and drums at the rear, which has led some to question their ability to cope with so much weight. Without merit, as it turns out. There’s a firm feel to the pedal and nice progression when you call for greater stopping ability.

Why the drums at the rear? Volkswagen says the fast-acting regenerative qualities of the driveline mean the ID 4 doesn’t need the sort of brakes required for a comparatively heavy combustion-engined model. “There’s less need for the brakes to do the stopping,” we were told.

Despite the ID 4 being a similar size to the Tiguan outside, Volkswagen claims the ID 4's interior is as roomy as the larger Touareg's. It is certainly spacious up front, with ample head and shoulder room giving it a feeling of a much larger car.

However, the rear seat is set unusually high due to the packaging of the battery, so although it offers a good amount of leg room, it is rather restricted on head room.

Boot capacity is put at 531 litres – some 11 litres more than the Tiguan. But although it features a flat floor, the loading lip is set quite high, making it a bit of a stretch to load heavy items. Folding the rear seats away liberates 1575 litres of space. There no luggage room in the nose, which is occupied by the power electrics for the driveline.

For those interested in towing, Volkswagen claims an unbraked trailer capacity of 1000kg.

The interior features minimalist design with digital instruments and, depending on the model, either a 10.0in or 12.0in touchscreen that comes with optional voice control. Buyers can specify an optional head-up display with augmented reality functions, including navigation pointers indicating the direction of travel.

Reflecting its more upmarket positioning, the materials used within the dashboard and other parts of the cabin are of a clearly higher standard than those of the ID 3. The 1st Max model available at launch comes equipped with supportive front seats featuring integrated headrests and a full-length panoramic glass roof that makes the interior of the ID 4 bright and inviting. It also has deep and useful oddment bins between the front seats. 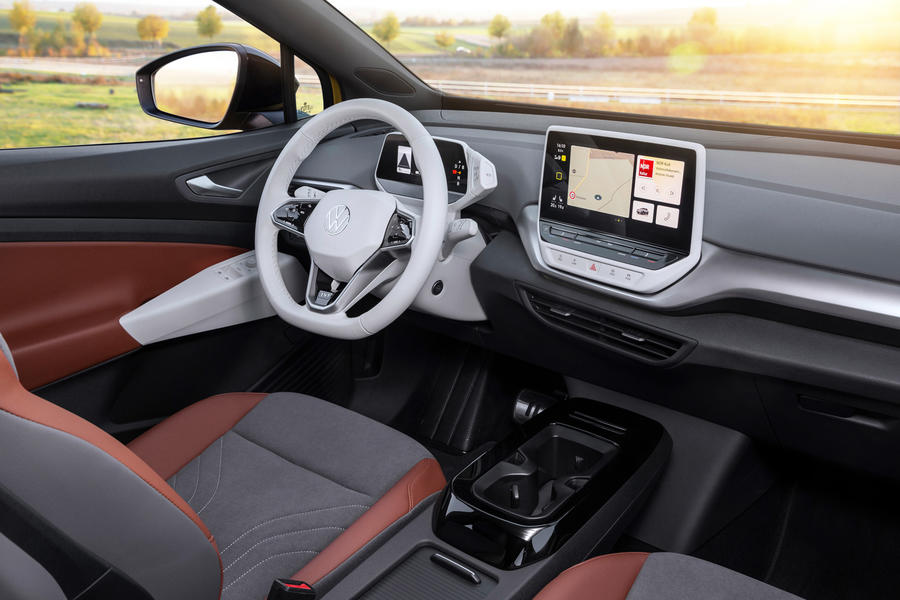 The ID 4 is striking proof of Volkswagen’s ability to produce a truly world-class electric car. Granted, it may lack the outright pace of some rivals in its early single-motor, rear-wheel-drive guise, but in terms of handling, ride and refinement, there is a lot to like here. It also serves up an impressive array of digital and connectivity functions, displays a relatively high level of quality and, thanks to its dedicated electric car platform and the packaging advantages it brings, is quite versatile.

Its biggest drawcard, though, is its sheer ease of driving, especially in urban conditions, where its manoeuvrability is well beyond any direct combustion-engined competitor, Tiguan included.

We’re going to need more time behind the wheel to judge whether the claimed 324-mile range of the top model holds up in real-world driving. However, our first outing in Wolfsburg’s new electric-powered SUV revealed it possesses strong energy recuperation qualities that go a long way to quelling any lingering range anxiety. If you’re planning to install a home charger or have easy access to one at your workplace, the ID 4 could easily be your only car. 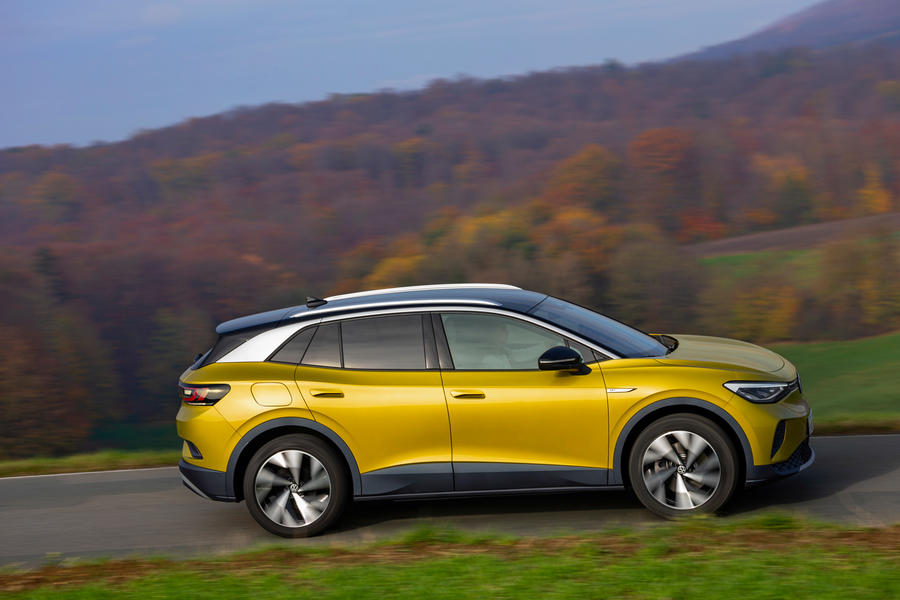 £59,950? Can't you buy an E-tron for that money. Pretty certain you can get a BMW IX3. The ID4 has the same interior to an ID3 which starts around £30k. I think VW has really developed some great electric cars. Harry's Garage review of ID3 was very favourable. I think with the heavy discounts VW is offering, the ID3 will break through. But the pricing of this ID4 is incredible. For that money I wouldn't want a white plastic dash.

why do i keep getting this for no reason: Your submission has been rejected due to our spam control rules. Please note that embedded links are not allowed in comments.

Interior looks like one of those coin operated rides at the mall.  Drum brakes.  Ridiculous price.  Sounds like anothe 4 star VW, then.