Most potent Golf yet is also lighter and even more focused than before; gains new Drift mode
Open gallery
Close

The new, eighth-generation Golf R is the fastest and most powerful series-production version of Volkswagen’s family hatchback yet. It's the fifth member of the brand’s significantly expanded performance line-up, and goes on sale today priced from £39,270.

Like its new Arteon R and Tiguan R stablemates, the top-rung Golf takes 316bhp and 310lb ft from an evolved version of the turbocharged 2.0-litre four-cylinder petrol engine that has powered the R-badged model New since 2009.

The subtle power and torque boosts for the fourth iteration of the EA888 unit – dubbed the Evo4 – bring the Golf R’s 0-62mph sprint time down by 0.2sec to 4.7sec, plus Volkswagen claims peak torque is available from 2100rpm all the way through to 5350rpm.

The focus hasn’t been solely on improving outright performance, however, with a series of tweaks to the drivetrain aimed at improving agility and responsiveness over the previous car. The Golf R receives the same upgraded version of Volkswagen’s torque-vectoring system as fitted to the hot Arteon and Tiguan, meaning drive is distributed variably between the rear wheels for the first time, rather than just between the front and rear axle. Using a pair of electronically operated multi-disc clutches, the system is said to balance output across the axle from 0-100% within milliseconds. 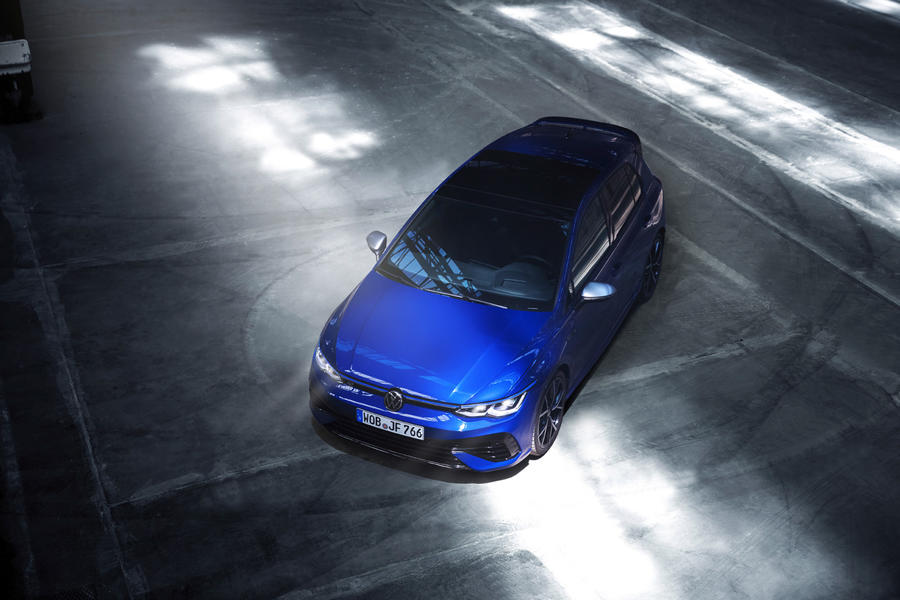 Elsewhere, the camber on the front axle has been upped by 1.3deg, the stabiliser and spring rates have been raised by 10% and the steering software has been tweaked for a more direct turn-in response.

Some 1.2kg of unsprung mass has been shaved from the braking system, too, while the front aluminum subframe has been lightened by 3kg. The brake discs have been expanded by 17mm in diameter on the front axle for improved stopping performance and an uprated master cylinder gives a “crisp, precise” pedal response.

The Golf R is most obviously told apart from standard Golf variants by way of its 20mm suspension drop, “motorsport-style” front splitter, sizeable black rear diffuser, quad-exit exhaust and bespoke wheel designs. Blue brake calipers and a new illuminating blue strip across the grille round off the exterior upgrades.

Inside, the upgrades include sports seats with blue inserts, a sports steering wheel, stainless-steel pedals and a selection of R-specific displays for the touchscreen infotainment system. A new R-view, for example, displays a horizontally oriented rev counter and gives gearchange recommendations when the car is driven in manual mode.

The optional R Performance upgrade package returns for the eighth-generation model, removing the 155mph limiter for a top speed of 168mph, gaining a larger rear spoiler for added downforce and wearing a set of 19in sports wheels as standard.

This pack also brings two additional driving modes: Special, which has been configured especially for optimum performance at the Nürburgring (where the new Golf R is said to beat its predecessor’s lap time by 17sec) and Drift, which Volkswagen said “opens up a whole new level of driving dynamics away from public roads and makes the experience behind the wheel even more fun”. 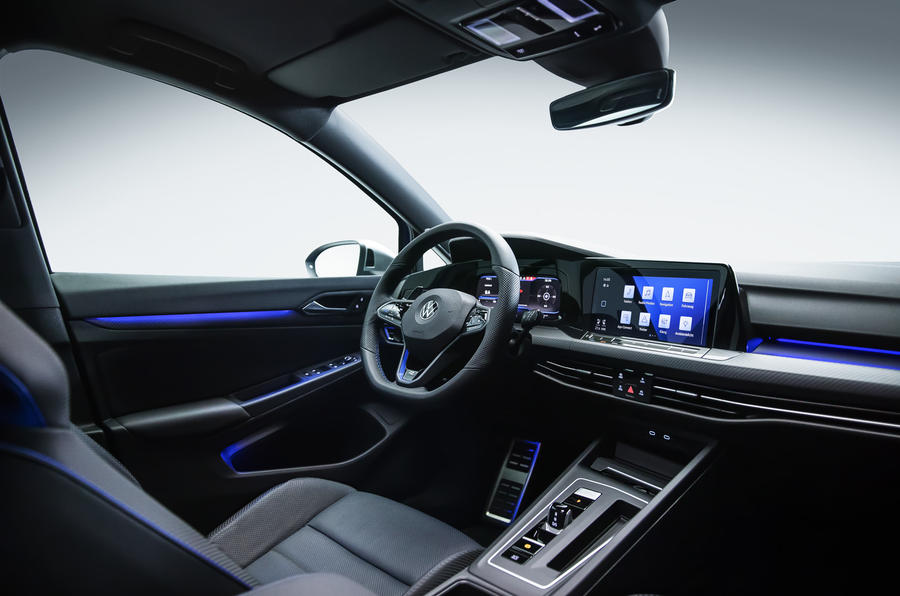 As before, an Akrapovic titanium performance exhaust system is available, weighing 7kg less than the standard system and bringing valve control so that the driver can adjust the exhaust volume.

Driving modes are selected using a new wheel-mounted R button, which puts the car into Race upon a hard press. Despite the enhanced focus on driver engagement for the new Golf R, Volkswagen has no plans to reintroduce the option of a manual gearbox, citing greater demand for the dual-clutch automatic (DSG), which it said gives “the best of both worlds” and is equipped with a manual shift function via paddles behind the wheel.

However, as for whether an uprated version of the EA888 engine could be introduced for a more hardcore Golf in future, head of technical development Jan Schiedek-Jacht was less categoric. “As a good engineer, you’re never really satisfied with what you have achieved. From that angle, we might look into further improvements in the future,” he said, fuelling the suggestion previously reported by Autocar that Volkswagen is plotting a 400bhp Golf R Plus to rival Mercedes-AMG’s A45 S.

More a case, VW dropped the Ball, and BMW picked it up.

Well at least it looks slightly more interesting with its go-faster bits on and in terms of the performance on offer I can't quibble too much at the price, providing the handling is up to the mark.

Problem is there are so many cars that can get near or better this performance now, ICE, EV or hybrid and look even more interesting for similar or less money, would you actually buy a VR6 over any one of them?

Antony Riley 4 December 2020
£40,000 well it will sell but OH dear such a dreary looking car.No wow looks ,boring exterior and well nothing special inside other than looking like John Lewis, s TV department not for .Am right in thinking that highly digitized dash is causing many problems for owners ?
Bwardle 3 December 2020

I honestly couldn't believe the price when I read the article. When the Mk VII was released in 2014 it famously dipped under £30 000 which made it a real hot hatch cult hero. £10 000 inflation in 6 years. I don't think so, VW. In fact, it seems like every manufacturer is hiking up the their prices for the sake of it. I read the new Yaris review recently and almost fell out my chair when I saw the range kicks off at just shy of £20 000. Ridiculous.

NavalReserve 4 December 2020
The price in Euros has not gone up very much.

The weakness of the pound since 2016 means that VW has to charge more pounds to get the same amount in Euros.

Not much inflation in euros over six years!