Tesla boss Elon Musk claims that 200,000 people have placed a deposit for the firm's Cybertruck, less than a week after the radical pick-up was revealed.

The futuristic-looking Ford F-150 rival was revealed at an event in California last Thursday, and is due to go on sale in 2021 with three different versions planned.

The Cybertruck is available to reserve for a $100 (£77) fully refundable deposit, which means there's no guarantee all those reservations will eventually become firm sales. The rush to order has netted Tesla $20 million (£15.5 million) in cash.

Musk added that the Cybertruck would be the "last product unveil for a while, but there will be some (mostly) unexpected technology announcements next year."

The all-electric Cybertruck is the same length (5.87m) as traditional competitors, but that’s where the similarities end. For starters, it features a radical wedge-shape design unlike anything else, which Tesla CEO Elon Musk insists isn’t far from production readiness.

The Cybertruck’s promised spec list is equally stunning. Three powertrain options will be offered with one, two or three electric motors. The single motor, rear-wheel-drive-only version is said to do 0-60mph in 6.5sec, with no quoted battery size but a claimed range of 250 miles. It can also tow 3400kg and has a 1360kg payload. This is said to cost from $39,900 (around £30,600) before any government incentives.

Opinion: is the Tesla Cybertruck too extreme? 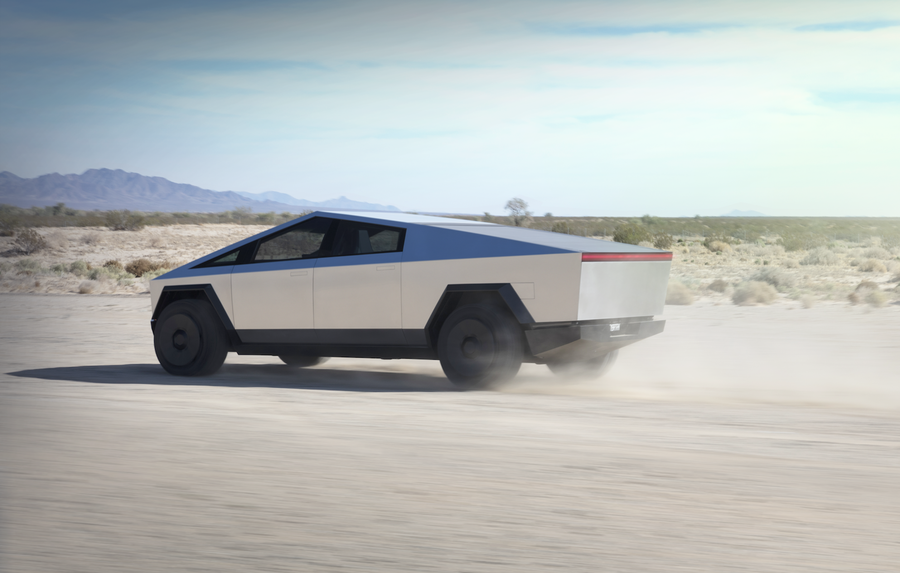 The Cybertruck’s angular body is said to be made of “ultra-hard 30X cold-rolled stainless steel”. It’s said to be bulletproof for up to 9mm rounds, with Musk stressing the body’s ability to resist damage with multiple implements (including a sledgehammer) used to try to break it on stage. However, this plan backfired when Tesla’s head of design smashed both left-side windows by throwing a metal ball at them, prompting Musk to quip: “Room for improvement."

The load bay is 6.5ft long, the same as that of a standard Ford F-150, and features a raisable cover. Tesla claims over 2800 litres of lockable storage space including the covered load bay (dubbed the ‘vault’), as well as space in the "frunk" and sail pillars.

The Cybertruck can seat up to six adults and was revealed in this form; it’s not yet clear whether a smaller variant will be offered. The cabin is pure Tesla: total minimalism, with the dashboard dominated by a 17in tablet-style touchscreen. The steering wheel is the classic concept car joystick style, but it’s expected this will become a traditional wheel by the time it enters production.

Opinion: is the Tesla Cybertruck too extreme?

I have a positive comment to make to start. Without Tesla I don't think that the mainstream auto manufactures would be where they are regarding the development and production of EVs. The cybertruck is another nudge from Tesla to force the production of EV trucks. Applause. However, I don't see the cyber truck as a serious threat to the likes of GM, Ford and Ram and the like. The wedge design, yuk!, is driven by the planned use of the SpaceX stainless steel which is so tough it can't be stamped resulting in the origami like production process. This process will prevent the kind of style changes that the buying public are so used to. The other issue is the exoskeleton body. This is fine for a basic pickup truck but what about the chassis cab trucks sold to upfitters to mount flatbeds, tipper beds or other fleet style work boxes on. Has Elon got a plan to satisfy this sector of the market ?

These Tesla fanboys really are insane. That piece of s11t has 200k orders?! Mad

Hmmm, 150k preorders in its

Maybe not so crazy after all