The Karoq is Skoda's challenger in Europe's fastest growing market segment, going up against the likes of the Nissan Qashqai. The entry-level price is more than £1500 higher than the Qashqai, although the Karoq gets 17in alloys, AEB, dual-zone climate control, LED rear lights, rear parking sensors and a driver fatigue monitor as standard. Sales for the car will begin on 3 October.

Skoda predicts that the top-selling spec will be mid-range SE L, while the best-selling engine will be the 1.5-litre TSI. Virtual pedal - sensor-based boot opening, a Canton sound system upgrade and park assist are expected to be the most popular options, while the petrol-diesel split will be 65% in petrol's favour - similar to the Yeti.

The Karoq’s design – along with Skoda's Alaskan indigenous language-based SUV naming convention – is based on that of the recently launched Skoda Kodiaq. There will be a choice of five engines at launch, with four of those new to Skoda.

Skoda CEO Bernhard Maier said: "With the Karoq we are opening a new chapter in the success story of SUV at Skoda. The Yeti sold 100,000 cars per year, which was no less than 10% of global sales. We expect the Karoq to do more than that."

Opinion: why the Skoda Karoq has an identity problem

The Karoq is also available with a range of advanced driver assistance and infotainment options, and is the first Skoda to come with a digital instrument panel. 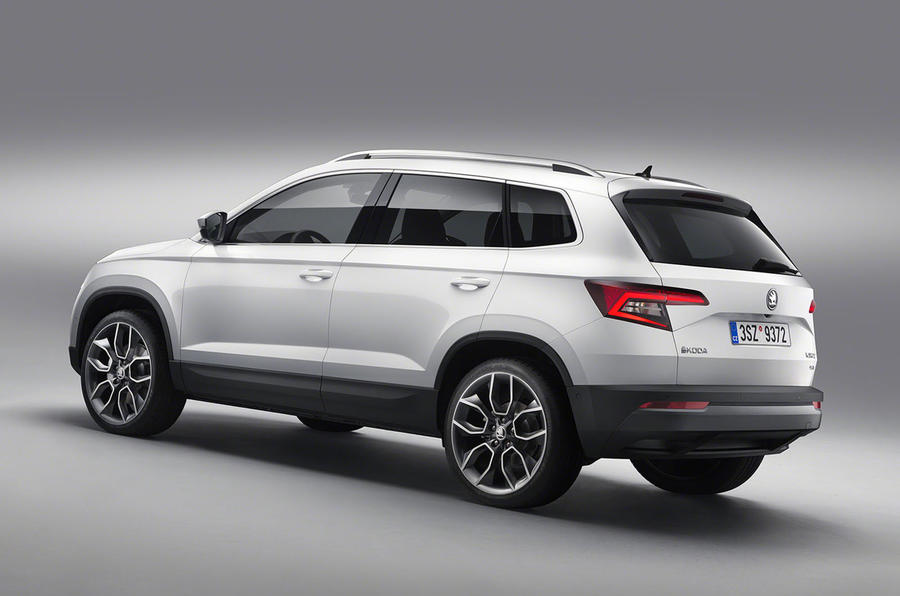 The decision to drop the popular Yeti name was in part to reinforce links to the Kodiaq, but also designed to help boost the car's global appeal. In China, one of the fastest-growing car markets where SUVs are hugely popular, the yeti association is seen as a negative, given that the yeti folklore originates in Bhutan, a country with which China has no diplomatic relations.

Board member for sales and marketing Werner Eichhorn said: "We sold 550,000 units in 2006, and 1.1 million in 2016. China is our fastest growing market. The compact SUV segment is the growth segment in the industry. Sales in the segment have tripled in the last couple of years and that will continue. The Karoq sets a clear cut trend in its target segment."

When asked about the name, Maier conceded that the Chinese market was a factor in the decision - but also cited a desire to ensure the Karoq had a unique identity. He said: "Starting with the Kodiaq, we thought a K and a Q is a perfect fit for our SUV, so we think it's worth the name Karoq.

"In China indeed [the Yeti name] is, let’s say, polarised. With the Karoq we don’t see that any more. Karoq is its own unique name, and you can’t take it differently or in a bad way. And Karoq has a nice story behind it."

The Karoq will be offered with two petrol engines: a 1.0-litre TSI three-cylinder with 113bhp and 129lb ft, and a 1.5-litre TSI with 148bhp and 184lb ft. The latter, which features active cylinder technology, can propel the car from 0-62mph in 8.4sec.

The new 2.0-litre TDI engine comes with a seven-speed DSG automatic gearbox as standard, while the others are available with a six-speed manual as well.

The Karoq is available in two and four-wheel-drive. Higher specs will come with a Driving Mode Select system with five modes: Normal, Sport, Eco, Individual and Snow. Off-Road mode, featuring traction control and electronic differential lock, will be an option on four-wheel-drive models.

Board member for technical development Christian Strube said: "After the Kodiaq, the Karoq takes the next consistent step in our SUV design. We've done over 2.5m kilometres [1.55m miles] of testing - that's equivalent to 60 times around the world.

"We have the option of personalisation for up to three different drivers. You can set up to 200 settings and that's saved to your personal key. We have made clever use of the interior space. It's typically Skoda. One Karoq offers 100% of what a Skoda customer wants in life."

The Karoq's suspension features a MacPherson-designed front axle with triangular wishbones, and a four-link rear axle. A Dynamic Chassis Control system on the 1.5 TSI and both 2.0 TDI engines will offer three chassis modes – Comfort, Standard and Sport – with electrically operated valves adjusting based on road conditions. 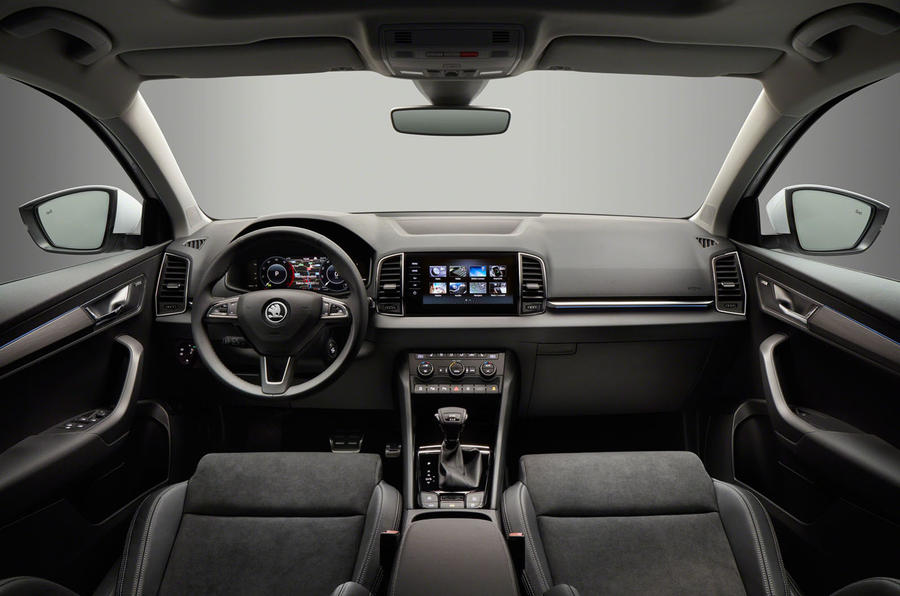 The Karoq will be the first Skoda to feature a customisable digital instrument panel. It will also come with three individual keys, which will remember a driver’s preferred drive mode, lighting, infotainment and other settings setting when they unlock the car.

There are four levels of infotainment system. The top level, Columbus, features a 9.2in touchscreen and gesture control for certain functions. Other features include a wireless smartphone charging pad and adjustable interior ambient lighting, along with a heated steering wheel, heated rear seats, Virtual Pedal hands-free boot system and an electronically retractable tow bar.

Skoda's technical development head, Christian Stube, said that fitting the Karoq with the latest tech was key to differentiating it in the increasingly crowded SUV market: "That's really important, and the MQB platform give you the technology to do it. Our competitors are not in the Volkswagen Group, our competitors are in the whole world. We do everything to be forward thinking and to be really competitive for our customers."

Moving entirely away from the Yeti, Skoda has based the Karoq’s design on the Kodiaq, building on the firm’s new SUV design language, featuring “crystalline elements”. Stube said: "We are proud of the design of the car. The MQB platform gives us possibilities and totally different proportions. It’s longer, it’s wider and it’s flatter. So the proportions of this car are really nice, and that gives you a good possibility to create good design."

The Karoq has space for five passengers, with a 521-litre boot capacity, which expands to 1630 litres with the rear seats folded. A Varioflex seating system allows the three rear seats to be individually adjusted or removed, expanding boot capacity to 1810 litres.

Another huge price hike accompanying a replacement model launch.....any interest I had in this car just flew out the window.

Can you stop adding two line to the top of an old story & counting it as a new one, it is very confusing & often contradictory as you have no idea what is the new information compared to older perhaps speculation.

Can a link to the old story just be included below the new information for clarity (and also it will keep the number of comments in check!!!)

Bit surprised that Skoda has pitched the Karoq's starting price £1500 above the market keader Qashqai,seems rather ambitious even more when the entry point for the Kodiaq is £22190 for a larger more capable car,when you can get a 4x4 2-0 litre petrol Kodiak for just over  £26k makes me think that the Karoq could suffer the same fate as the Skoda Rapid which was priced too close to the Octavia which offered a lot more car for not much more money,

Bit surprised that Skoda has pitched the Karoq's starting price £1500 above the market keader Qashqai,seems rather ambitious even more when the entry point for the Kodiaq is £22190 for a larger more capable car,when you can get a 4x4 2-0 litre petrol Kodiak for just over  £26k makes me think that the Karoq could suffer the same fate as the Skoda Rapid which was priced too close to the Octavia which offered a lot more car for not much more money,

Platformwise the Karoq & Kodiaq are very similar so acceptable for similar pricing, however to me the difference between a Rapid & Octavia are much more significant.