Skoda has released a new teaser image for the Monte Carlo variant of its new Mk4 Skoda Fabia.

The new image from Skoda , which shows a close-up of a Monte Carlo badge on the front wing, joins a series of teaser sketches released by the firm last week, when the Czech brand also confirmed that the supermini won’t receive a hot vRS variant.

Joining the SE L and Colour Edition at the top end of the Fabia range, the Skoda Fabia Monte Carlo will offer a selection of visual upgrades as well as a new engine option: the 148bhp 1.5-litre four-cylinder turbo petrol already used in several Skoda models, including the Skoda Kamiq, Skoda Octavia and Skoda Scala.

The addition of this engine option means this will be the most powerful Fabia since the 177bhp second-generation Skoda Fabia vRS, launched in 2010.

A two-tone look, similar to that of previous Monte Carlo editions, can be seen in preview sketches released by Skoda, with bright red paintwork offset by a black roof and mirrors.

The car features a new front apron with a wide air intake stretching across it and there is a black grille surround. The rear diffuser, side skirts and window surrounds are also finished in black, while Monte Carlo badges feature on the wings.

The model also appears to have large wheels – likely to be 18in in diameter, as this is a size already available on other variants of the Fabia. 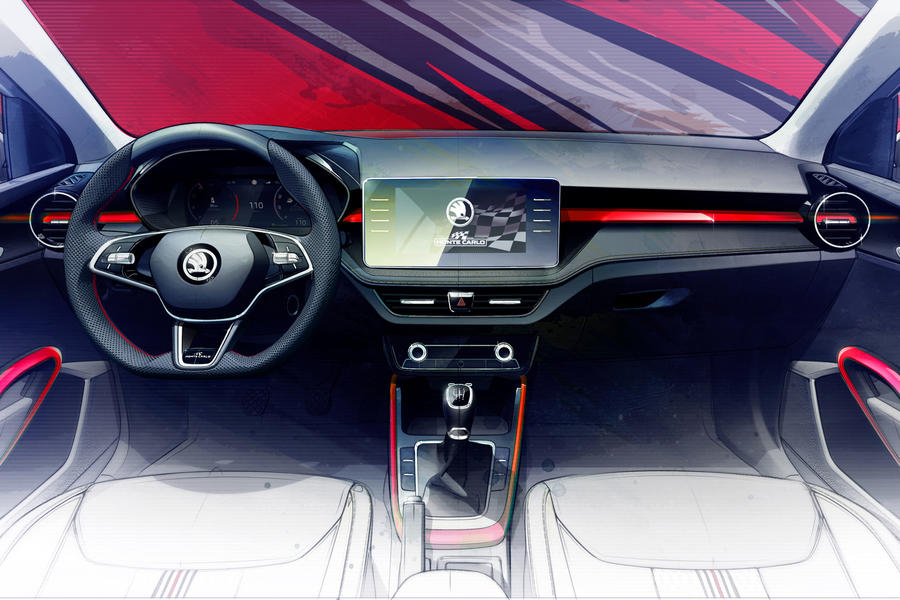 The black-and-red theme is carried over to the interior, where there's a red stripe across the dashboard and red detailing on the door cards and around the centre console.

A Monte Carlo logo is visible on the touchscreen, which itself appears to be the 9.5in unit used in other Fabias. A sporty three-spoke steering wheel also features.

The gear lever for a six-speed manual gearbox can be seen in the sketch, meaning the 110bhp 1.0-lite three-cylinder turbo petrol engine – the most powerful unit currently offered in the Fabia – is likely to be an option. This is backed up by the number 110 appearing prominently on the digital dashboard display.

Skoda first introduced the Monte Carlo badge on the Mk2 Fabia 11 years ago, and it has been the most sporty trim level on every generation since.

Both of the previous models could be specified with stiffer sports suspension, an option that is likely to return for this car.

The new Fabia Monte Carlo will be unveiled on 15 February, before UK deliveries begin in late May.

Wow, it's the second time this piece of news has been covered in the last few weeks. Am I missing something? A sticker and slightly different trim? Imagine if Autocar covered "teasers" for every new trim level of every model of car to this degree?

What a waste of time.

I know that VWAutocar is the inhouse magazine of VAG but surely it's time to stop some of this nonsense content getting through?

It's a little embarrassing really...

Some rather unkind comment here. I remember owning one of ther early Golf 16-valve GTis with, if I remember, 138 horsepower. Now that was certainly fast enough to be fun, though I daresay it was a bit lighter than this Favia. Let's wait and see how much this thing costs and how efficient it is before passing judgement, performance isn't everything especially on today's roads.