The second instalment of Nissan's hugely popular crossover will have new platform, a fresh design and an interior overhaul
Open gallery
Close

Nissan has previewed the styling of its long-awaited new Juke crossover in a second teaser image.

The darkened shot shows a darkened silhouette of the front of the car with the front headlights illuminated. While Nissan released the image – which features the slogan 'Keep your eyes open' and the date 3 September – without naming the model, it's clear that it's the second-generation Juke.

When lightened, the image also reveals some of the new Juke's grille, along with other front styling deals.

The image is the second teaser that the Japanese company has revealed so far. An earlier darkened image was a zoomed-in view of the sleek LED headlight design, which echoes the dual-light layout of the original car.

The Mk2 Juke, designed at Nissan's London studio, will go on sale in early 2020, a few months after its unveiling. It will replace a model that has been on sale with relatively few changes since 2010.

Disguised test cars have shown that the Renault Captur rival's design will evolve the distinctive shape of today's car but remain recognisable. Details such as Nissan's V-Motion grille, adapted from the Micra, will be brought in, while the rear end will have a more angular look.

In an exclusive interview last year, Nissan's global design boss, Alfonso Albaisa, claims the second-generation Juke “doesn’t look too much like the last one”, adding: “It doesn’t look like IMx [an electric crossover concept unveiled in 2017] or the new Nissan Leaf, either. It’s an urban meteor with a nasty attitude.” 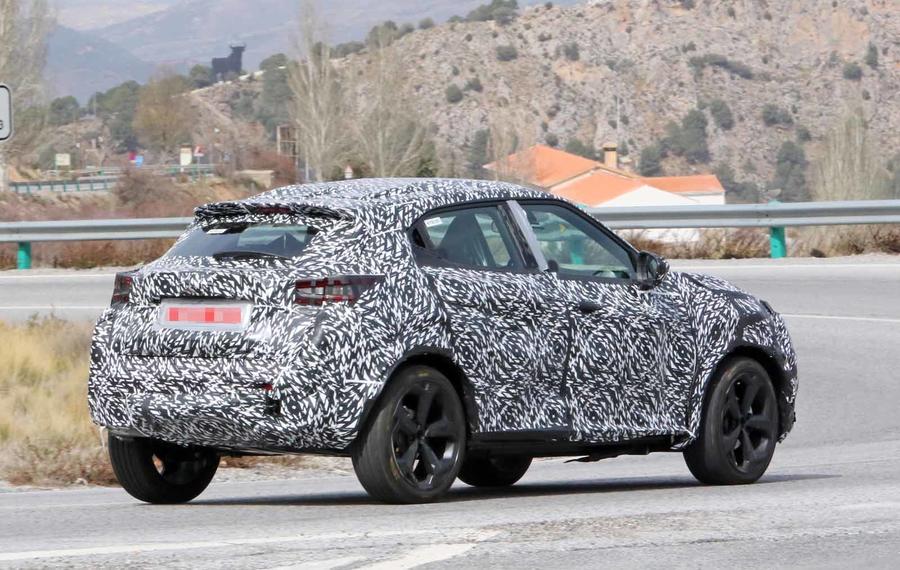 Albaisa quashed a rumour that the Juke replacement had been reviewed and rejected, saying: “[The Juke] is certainly coming soon. But it didn’t get ‘sent back’. I’m not sure where that story came from. It’s a very cool car, and it still has all of its attitude.”

The original Juke was introduced at the 2010 Geneva motor show and helped to boost the popularity of supermini-sized SUVs. In terms of sales, that class grew tenfold across Europe between 2010 and 2016, and by 2022, it's expected to double in size from its 2016 level of 1.13 million units.

Juke sales have exceeded 100,000 per year in Europe four times to date, and the styling of the Sunderland-built car was considered an important contributor to that.

“Our job was easier with the first one, because there was nothing else like it,” Albaisa told Autocar. “And that car’s success was so huge even given how polarising it looked. The second one couldn’t be derivative or evolutionary and still be a Juke. We’d almost have to change its name to Nancy otherwise.”

The new Juke is likely to be built on a stretched version of the Renault-Nissan-Mitsubishi Alliance’s CMF platform, as used by the new Renault Clio. It's expected to shun the naturally aspirated petrol engines that have accounted for much of its sales volume so far, instead using the turbocharged 1.0-litre three-cylinder and 1.3-litre four-cylinder units used in the Nissan Qashqai.

A 1.5-litre 109bhp diesel is likely to be offered, too, while four-wheel drive will be kept for automatic models higher up the range.

Albaisa wouldn’t confirm whether the new Juke would be previewed by a show car, in the same way that the Qazana concept displayed at the 2009 Geneva motor show was used to test the water for the production car that followed. Given the riskiness of the original Juke’s styling and how well established the model has become, it’s likely that Nissan will maximise the impact of the new Juke by keeping it under wraps until the last moment.

Nissan hybrids in the pipeline as brand expands electrification push

I hope the design is more

I hope the design is more coherent than its predecessor!

Marmite design. I think it's

Marmite design. I think it's pretty grim, but it scores for being different from the clone-mobiles from other manufacturers.