BACK TO ALL NEWS
Currently reading: Honda e: UK pricing confirmed from £26,160
UP NEXT
Fisker goes radical with Pear EV SUV

Honda's highly anticipated electric city car, the Honda E, has appeared in production form at the Frankfurt motor show, as the firm confirms it will be available from £26,160 in the UK, including the £3500 plug-in grant.

The model's price tag is lower than initially expected, but more expensive than the new Volkswagen ID 3's £24,000 starting price. Entry-level models sit atop 16in wheels, and are powered by a 134bhp electric motor, with prices rising to £28,660 for the 152bhp Advance variant. Both available powertrains produce 232lb ft of torque and deliver 0-62mph in around 8sec.

In addition to the power boost, Advance trim adds 17in wheels, a parking assist programme, a digital rear-view mirror and an upgraded sound system. Range for both models is quoted at 136 miles, with Honda UK boss Phil Webb calling that "more than sufficient" for the average European commute of approximately 30 miles.

Project manager Kohei Hitomi told us earlier this year: “Some potential customers might not be satisfied, but when you think about bigger range and a bigger battery, it has drawbacks in terms of packaging and balance.” The e's relatively small powertrain has allowed for a compact footprint; all variants measure 3895mm by 1750mm, with a roof height of 1510mm. 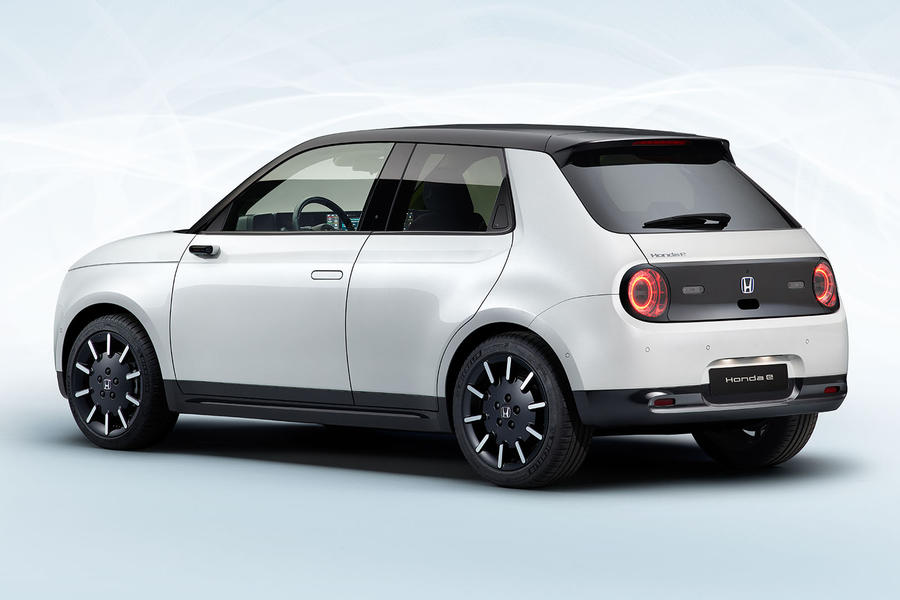 Fast charging at 100kWh means an 80% charging in 30 minutes, claims Honda, while a 50kWh charger will manage the same in 36 minutes.

The e is also available on finance, with prices starting from £299 per month for the base-spec model, and £349 for Advance trim.

Also detailed at the model's Frankfurt debut is an associated smartphone app, MyHonda+, which will give e owners access to a suite of remote-operated services, like interior pre-heating, journey planning and charging process initiation.

There are only two visual changes between the prototype seen at the Geneva motor show in March and the final production car: the grille badge is not illuminated as this feature is illegal in Europe and the side skirt no longer says ‘Honda Design’.

The Japanese car maker is heavily investing in electrified models, having been initially slow to adapt. The CR-V hybrid launched last year, but this is Honda’s first electric car for Europe and is set to become its ‘halo’ model, given its advanced technology and price. By 2025, Honda intends for all of its European models sold to be electrified.

The four-seater sits on a new platform designed for A and B-segment electric cars, and is slightly shorter than a Honda Jazz and around 100mm taller than a Mini.

The rear-mounted electric motor drives the rear wheels, which employ torque vectoring, intended to give a smoother response and improved handling in tight corners. The car rides on four-wheel independent suspension. The new machine boasts a 50:50 weight distribution and a low centre of gravity, thanks to the placement of its batteries low within its wheelbase. 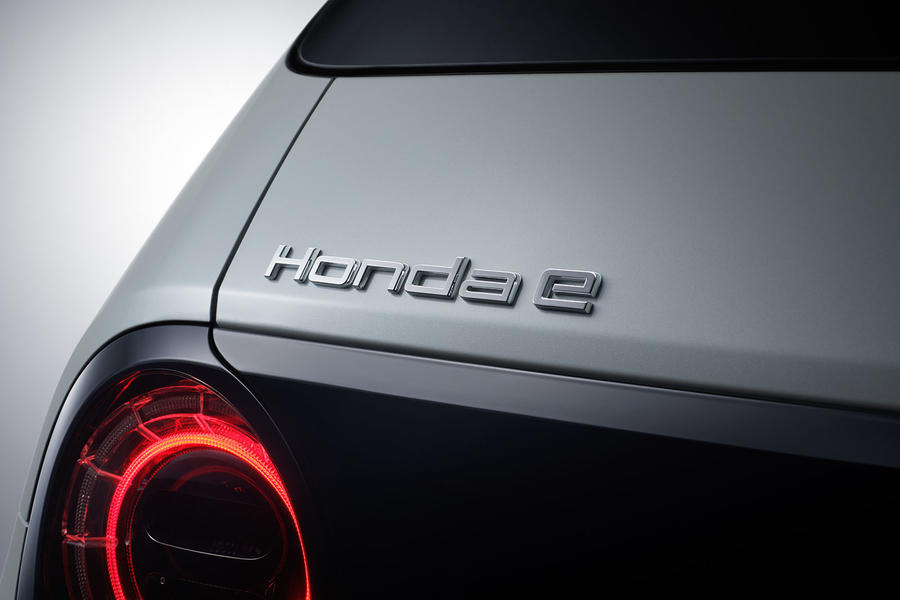 Early signs are positive: our deputy editor James Attwood drove a prototype recently and wrote: “It’s in the corners where the E really scores… showcasing an agility and responsiveness.”

The model uses cameras instead of side view mirrors as standard, a first for the compact segment. The system, which projects live images to two 6in screens, reduces aerodynamic drag by 90%, claims Honda. That is said to improve the efficiency of the entire vehicle by 3.8%, playing a significant role in maximising range.

It has two modes: normal and wide with an extended field of view, and Honda claims they reduce blindspots by at least 10% compared to mirrors. A special water-repellent coating will be used to stop water obscuring the driver's vision.

There are also flush door handles to further boost aerodynamic efficiency, while the charging port is mounted centrally in the bonnet.

Inside, there is a full width five-screen digital dashboard, dominated by two 12.3in LCD touchscreens, which allow control of connected infotainment services. They are built into a dashboard finished with a wood-effect trim. The seats – including a two-seat bench in the rear – are covered in polyester, which, as with the wood effect, is designed to make the interior feel like a living room.

Artificial intelligence uses machine learning to understand an individual’s voice over time, so that response to voice commands grows in accuracy. 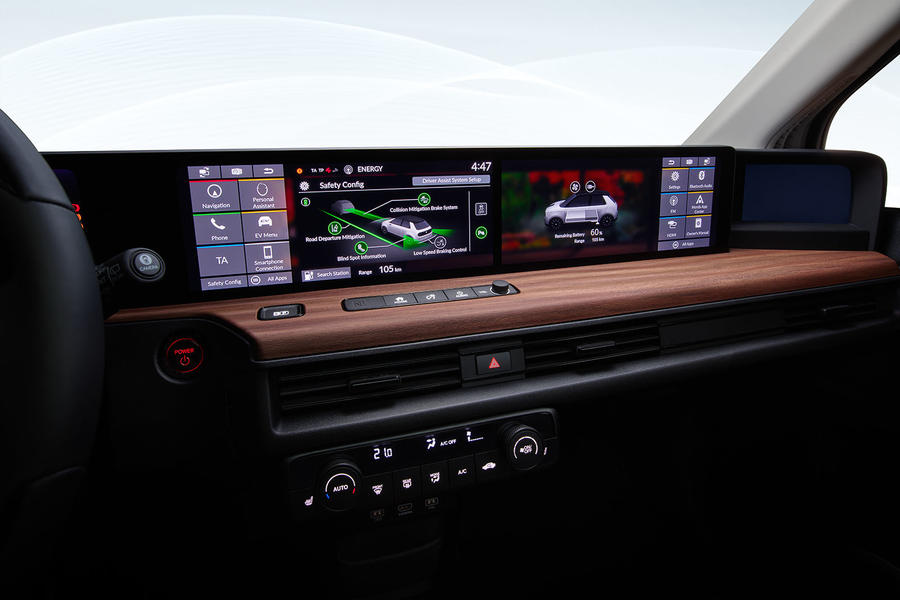 The firm believes the car’s retro design will give it an Apple-style appeal to customers. Hitomi has previously said the car has been the subject of an internal “battle” over whether to put it into production, with the positive reaction to the concept being a key factor in it gaining approval.

Hitomi has said it is “important” the car is affordable but he added: “A low price is not always a guarantee of success. When you look at Apple products, they are not cheap, but everyone wants to have them because of their added value. We believe it is the same for the electric vehicle.”

The UK will be among the four biggest markets in Europe for the model when it arrives on roads next summer. UK sales boss Phil Webb said there were 364 UK reservations for the E currently, and hoped by its first full year of sales in 2021, it would be “at least into four figures”.

Why Honda bosses weren't convinced about the e

If you just looked at the spec it would be a no go, but the looks and perhaps the interior ( need to see more pictures of that) do give it a sense of something different and could be a feel good factor for driving, similar to Tesla, rather than say something like the e 208 or e corsa.

£299 per month is not too bad.  I tend to drive less than 100 miles per day, so that would not be a problem.  I guess quality would be pretty good too.

oh yes teh Renault is cheaper

oh yes teh Renault is cheaper, ummm, no it is not, you have to pay £75 per month for the rent on the batteries so over three years, is nealry another £3k, or you pay an extra £7k to buy them outright, so please factor that in before you harp on about teh Renault being cheaper, plus, it is a Renault, at least Honda has a better reputation than Renault.

oh yes teh Renault is cheaper, ummm, no it is not, you have to pay £75 per month for the rent on the batteries so over three years, is nealry another £3k, or you pay an extra £7k to buy them outright, so please factor that in before you harp on about teh Renault being cheaper, plus, it is a Renault, at least Honda has a better reputation than Renault.

Really, if only you read the previous article. The Renault starts off at £25.5k WITH battery whih is less than the £27k  Honda (probably the low end of estimate as well)

Then there's the MINI EV at around £25k with Battery.

I think it is overpriced. But

I think it is overpriced. But to compare it to the Zoe, is to compare a more powerful RWD car to a slower FWD car. They are not in the same market. To me the worst thing they have done to the styling. I really think Honda are right that people will pay for a premium for the right product, just like millions do with the iphone. But this isnt it. The concept was.

I hope it does well enough that Honda follow it up with a production version of the Sport EV, but that they  leave the styling of that alone