BACK TO ALL NEWS
Currently reading: First drive: Honda E 2019 prototype
UP NEXT
BMW opens door to M1-inspired electric supercar

The electric Honda E has been right-sized for brisk, urban, fun driving at the expense of range. Does it deliver and is it worth the compromise?
Open gallery
Close

What are you paying for when you buy an Apple iPhone? A combination of stylish design, cutting-edge features and versatility that sets the iPhone apart from rival smartphones? Or are you paying a premium for form over function, spending extra for that Apple logo despite other, technically superior phones being available for substantially less money?

I pose that question because Honda bosses rather fancy the E, their succinctly titled forthcoming electric city car, as the car equivalent of an Apple product. By that, they mean that it mixes stunning design with superb functionality, to the point that people will be prepared to pay a premium – likely somewhere just over £30,000 – for it.

And there’s no doubt the diminutive Honda E Prototype has won an army of admirers on the basis of its ultra-stylish looks, as the web numbers show every time Autocar publishes a story on it. That has been true since the original (and arguably better named) Urban EV Concept was launched in 2017, and when the latest, roughly 95% production ready E Prototype you see here was revealed at the Geneva motor show in March this year.

But beyond the E’s wonderful, cutesy design, when you glimpse at the spec sheets, it’s hard to shake the concept that Honda might be asking buyers to pay more for less. 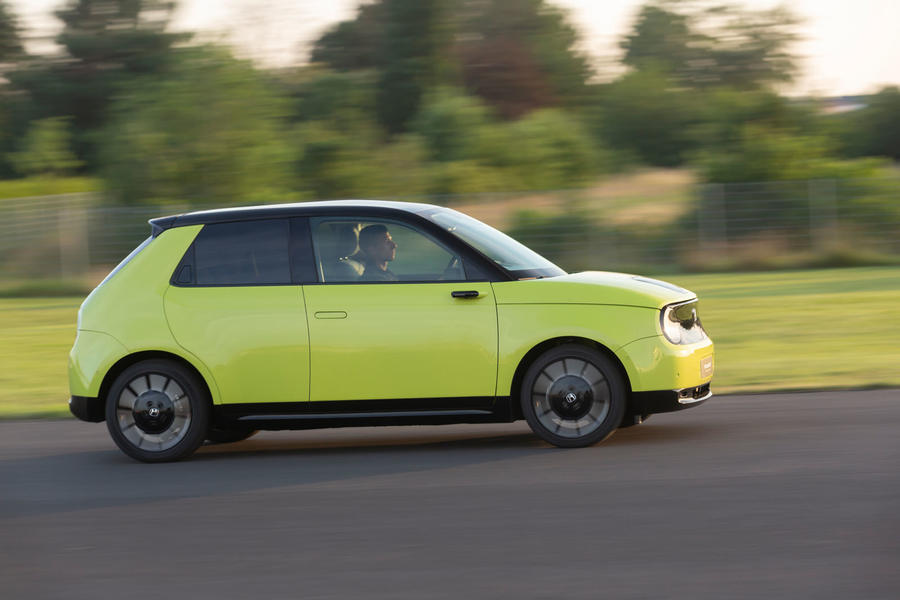 Those specs (at least, the ones we know so far), then: the car’s electric motor, mounted at the back of the car and driving the rear wheels, produces 148bhp and more than 221lb ft of torque.

Here’s the kicker: the E will use a 33.3kWh liquid-cooled battery, which, Honda says, will deliver just over 125 miles of range. That compares with 193 miles for the BMW i3, 242 miles for the new Renault Zoe and 282 miles for the Kia e-Niro, all of which are likely to cost the same as or substantially less than the E. It's also true that most of those models are bigger and more practical, particularly in the rear seats and boot.

With range anxiety a big issue for prospective EV buyers, the E runs counter to the prevailing industry push that, when it comes to battery size and range, bigger is always better. But Kohei Hitomi, the Honda E’s project leader, says the firm is quite deliberately taking a different approach.

“If you really want to cover all the requirements possible from a customer perspective, then you need to provide a car with a bigger range,” says Hitomi, “but that would bring a lot of drawbacks we believe are somewhat nonsense.

“It would make the car unnecessarily bigger, heavier and more expensive and would also mean it suffers in terms of charging performance. We believe that this size and range is the best balance in terms of overall manoeuvrability and dynamic performance for size and charging.”

In other words, given the types of mileage most city car buyers cover, the E’s comparatively small range is ample – while offering packaging benefits that enable it to better meet its defined purpose, cutting the weight and offering better driving performance and handling.

“This is a car for customers who are satisfied with a driving range of around 125 miles,” says Hitomi. “If they need a longer range, we have to admit this may not be a suitable car. But customers who can live with this range can appreciate all the additional value of this car.” 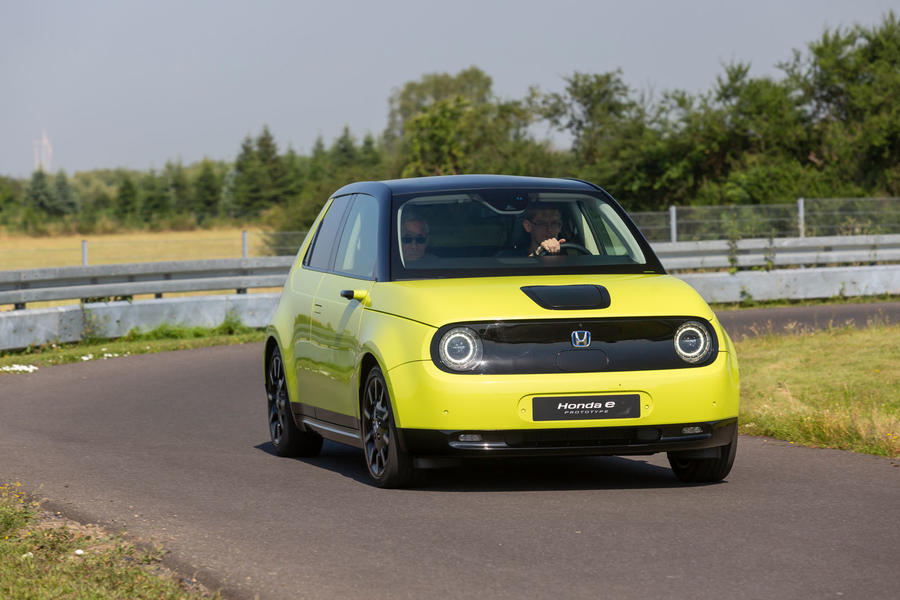 That’s the theory, then. But until now, we’ve only been able to look at the car. This is our first chance to get behind the wheel of the E Prototype – albeit for a short run at slow speeds on a Honda test track – and get a sense of whether the E is a stylish, cutting-edge premium product or a triumph of form over function.

Time, then, to look past that design. Which is hard, because it just looks so darn good, from the compact dimensions and rounded bodywork to its circular, emotion-filled headlights that evoke the first-generation Civic. It’s delightfully retro, although Hitomi thinks that sounds old so would prefer you to use the term “nostalgia”. He adds: “It needed to have a familiar appearance, because it’s easier to accept than a completely new, somewhat exotic design direction.” Even when you sit inside, the E is achingly stylish, from the unusual, practical fabric to the retro-futuristic dashboard fusing a wood trim-effect veneer with a large touchscreen.

That simple design also helps make new technology feel more familiar, according to Hitomi. “It’s the same for smartphones: it’s important to have a simple, straightforward appearance to the technology. If the design is complicated, it’s more difficult to accept.”

The car’s frontal appearance, with its traditional bonnet design and relatively upright windscreen, was conceived in part to minimise the size of the A-pillars and boost visibility.

The side-view cameras – which will be included as standard – also help, with one display screen at each side of the dashboard offering a clear view backwards. When reversing, they switch to a lower view, with an overhead 360deg display on the central touchscreen. The central rear-view mirror operates as both a traditional mirror and as a screen to display a camera view.

As with many electric cars, the powertrain controls are located between the front seats, with switches for park, reverse and drive, a toggle to switch between Normal and Sport modes and a button to activate the single-pedal control function. The E’s abundant torque can be felt clearly under acceleration, although even in Sport mode, it’s balanced for smooth delivery, with an estimated 0-60mph time of around eight seconds. Push the pedal to the floor and there’s a suitably rapid response, although it never feels brutal or excessive for the car’s size. 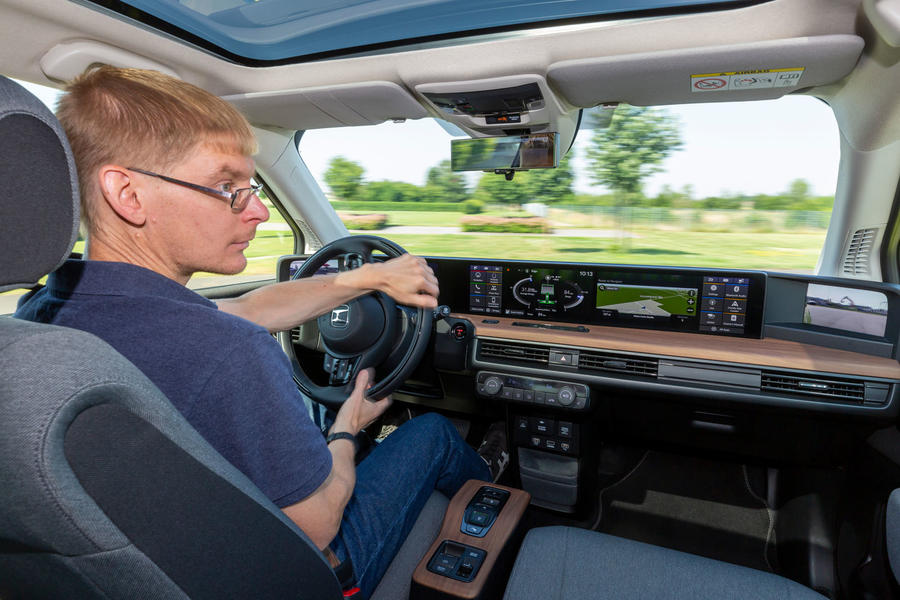 As with similar electric cars, the E Prototype features regenerative braking, which can be adjusted with paddles behind the wheels or controlled using a single-pedal mode, which uses maximum regeneration to slow the car when you lift off the accelerator.

But it’s in the corners where the E really scores, with its small size, wheels pushed to the edges and tight turning circle – 4.3m, thanks to front wheels that turn by up to 45deg – showcasing an agility and responsiveness that’s hard to describe without using clichés such as ‘go-kart handling’. It’s difficult not to raise a smile.

The ride quality also feels good, thanks to independent four-wheel suspension with MacPherson struts all round. Honda benchmarked the E Prototype’s ride against larger cars and the comparison feels appropriate, with the caveat that Honda’s test track had little in the way of rough terrain. “Because of the cost and high value, we set targets for D-category levels of ride comfort and vibration,” says assistant project leader Takahiro Shinya. “Just beating other electric cars was not enough, whether for performance, comfort or vibration.”

The E Prototype’s weight and full dimensions have not been disclosed, although it is very definitely a compact car: only two adults will fit in the back, where leg space will be limited and the boot will struggle to accommodate a weekly shop. 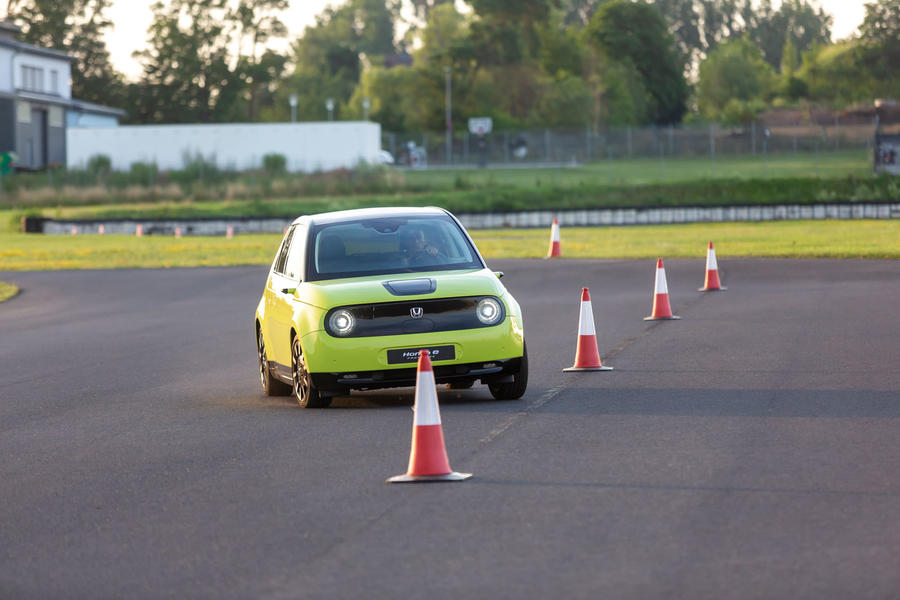 The finished version of the E is due later this year, when we’ll get a chance to drive it properly and consider the lingering doubts. Those question marks hang over the car’s range and that likely price point of around £30,000, pitching it against larger, more practical EVs with bigger batteries, despite Hitomi and his team insisting that the car’s relatively small battery is ample for target customers and offers packaging and other benefits.

“The price, we hope, is not the determining factor for whether people choose this car,” says Hitomi. “If you are really price conscious, maybe an electric vehicle is not the right choice for you in the first place.

“It stands for smartphones as well. If you’re really on a tight budget, you’re not going for an iPhone X, but if you are really keen and interested in the technology and features, then basically price becomes a secondary priority. That’s what we believe and hope for this car – that people opt for it because of the coolness, the design, the features, the advanced possibilities, as a completely new way of combining mobility and lifestyle.”

It seems likely the Honda E will divide opinion, between those utterly sold on the stellar design and tight city car focus and those who just can’t get past its size and range. The sort of argument that rages about the iPhone, then.

Still, our brief run in the E Prototype is enough to convince us that it has more to offer than merely retro – sorry, nostalgic – design. The signs are that its nimble handling fits its credentials as a versatile urban runaround – while offering the sort of fun driving response that should keep anyone already won over by the car’s style happy. 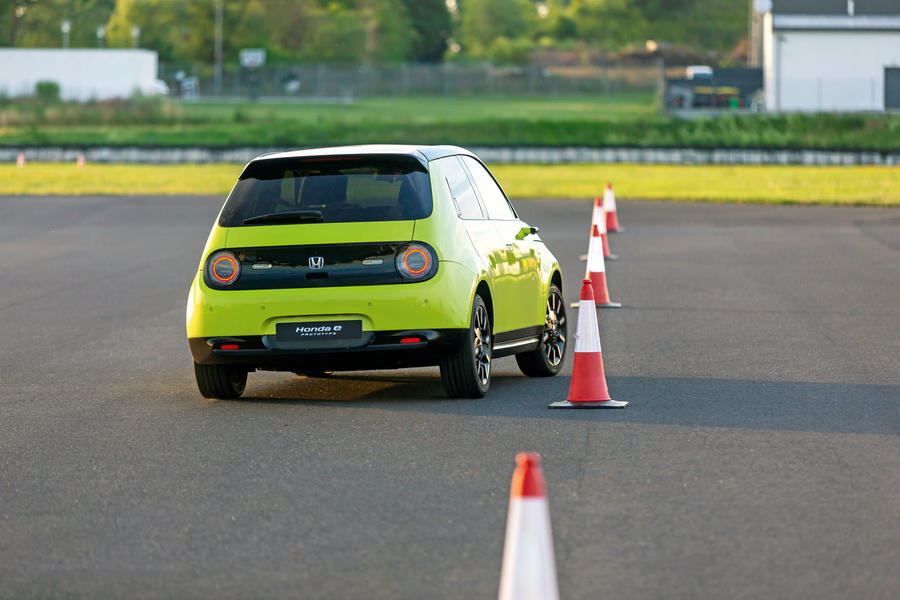 The finished version of the E Prototype will be Honda’s first fully electric series-production car and serve as a spearhead for the firm’s plan to offer an electrified version of every model in its range by 2025. But so far, there’s no news on any pure EVs that will follow. The firm has developed a bespoke small EV platform for the E Prototype, which will form the basis for future models – although Honda’s Ko Yamomoto insists nodecision has been made on what form that will take.

“What we wanted to propose with the E was a new proposal for a car: not just as a transportation measure, but in additional value; changing the car from a tool to a service,” he says. “We need to carefully considerour next steps and to consider the type of vehicle the market is demanding. Is it a more sporty version of an electric vehicle or a more practical direction like a mini-SUV? That’s what we need to consider.”

Why Honda bosses weren't convinced about the e prototype

It is a very odd thing for

It is a very odd thing for Autocar to assume all website traffic is from admirers. When evidentially it isn't.
The Apprentice 2 July 2019

Been out and about today, met

Been out and about today, met up with family next town over, did the weekly shop and so on. Probably no more than 50 miles though. If I had one of these on the drive of course I would have taken it instead of the ICE car, it would be more fun than the SUV!I am not sure price is so bad comparatively, is that £30K before the grant?.. so up to £3.5K off, and cheaper than a 39kw/h 136bhp Kona. But its still a lot compared to a ICE. If it were Audi badged they might 'get away' with it but I don't think Honda commands anything like that kind of aspiration these days. Although they seem to make bloody good F1 engines now!

There is a reason why I WON'T buy an iPhone: its price!
Likewise, I simply will not consider paying 30K for such an ugly duckling, side-cameras et al!
Good luck to Honda but I fear that this could well become another Insight...
View all comments (20)