BACK TO ALL NEWS
Currently reading: New Mercedes-AMG GLE 53 Coupe to get 429bhp straight-six hybrid
UP NEXT
Ford Kuga drops diesel option due to falling sales

Mercedes-AMG's coupé version of the GLE has yet to be revealed, but new spy shots catch a hot '53' version testing ahead of 2019 release
Open gallery
Close
Share story

Mercedes-Benz is several months away from revealing its new GLE Coupe SUV, but spy photographers have already caught a hot AMG version testing in disguise.

The sloping roof version of Mercedes' latest GLE, which recently went on sale in the UK, isn't due to make its debut until mid-2019, with deliveries towards the end of the year. These shots show the GLE Coupe will feature an evolutionary profile and similar shape to the outgoing model, but with front- and rear-end designs adapted from the latest GLE and a more steeply raked roofline.

The GLE Coupe sits on the same MHA (Modular High Architecture) platform introduced with its straight SUV sibling, introducing more space for rear-seat passengers and the capability of offering hybrid variants across the line-up. 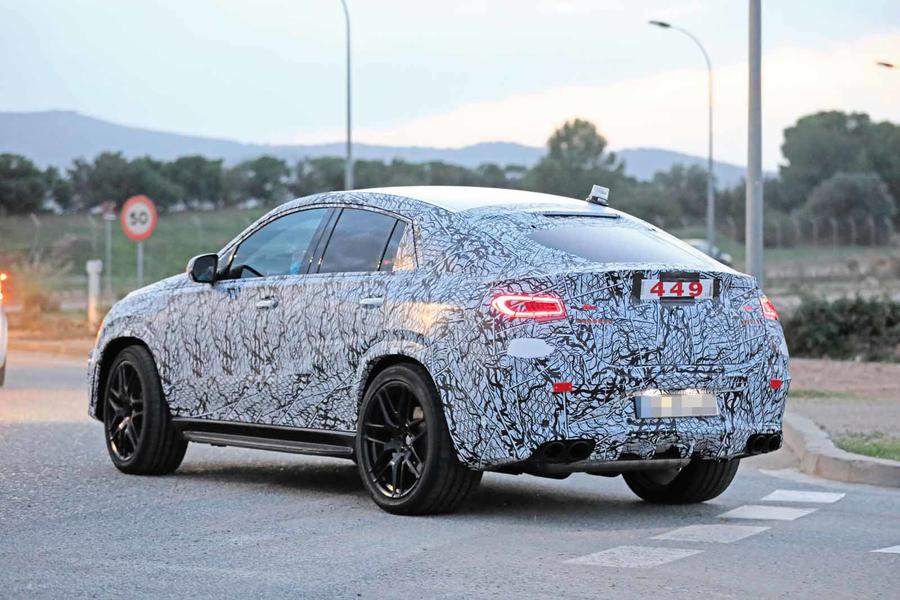 A selection of four- and six-cylinder turbocharged petrol and diesel engines will power the GLE Coupe's standard line-up. The range will be topped initially by an AMG-tuned GLE 53, using the same 429bhp 3.0-litre inline-six petrol unit as the CLS 53 four-door coupé. That makes use of a mild-hybrid system featuring an integrated starter/generator adding up to 184lb ft of torque when needed.

The engine, also expected to arrive on the GLE SUV next year, should make the GLE Coupe capable of 0-62mph in just under five seconds, while offering improved official economy over the old GLE 43 equivalent. It will be mated to a nine-speed automatic gearbox and Merc's 4Matic four-wheel-drive system.

In 2020, Mercedes is expected to top out both GLE ranges with full-fat AMG 63 variants, offering around 600bhp from the now-familiar 4.0-litre 'hot vee' twin-turbocharged V8. That engine could potentially see a hybrid system integrated into it, improving roll-on performance and official economy.

ARRGH that thing is Fugly

ARRGH that thing is Fugly.Friend has the new E53 Coupe and it is lovely! And a PROPER Coupe.

one In the eye for Range Rover.

I thank MB and BMW for their efforts to give choice to the general public. Not every car can be stunning, and BMW and MB have gone to great lengths to design cars to reflect this with The GLE and x4/6. It is a brave company that will invest so much money in helping others by providing choice and a car with all the disadvantages of a small coupe combined with the issues of cost and handling of a 4x4 in a  “premium lack of utility vehicle” . Bravo I say.

Range Rover take note. What say you Rodester? The Germans have smited your beloved thug mobile and driven a Bavarian knuckle duster into your taut surfacing. Weep JLR at the daring German backlash to your premium efforts. Celebs everywhere are reaching for their cheque books. Pah to you I say.

likewise Rolls Royce and Bentley have created visions that make the majority of cars look so much better. Well done Rolls Royce for your cullinan. You take my breath away. Maybe not a good way, but you do anyway.

Although I do stand firmly behind anyone wishing to buy one of these “things”. It’s their right, their money and their choice. If it makes them happy, get on with it.

Having viewed many a driver of X4, X6, GLC coupe and GLE coupe. They are male, female, young middle aged utter utter c@$ts. Really really unpleasant, social climbing, arrogant c$^ts. Just spend more than 10 minutes anywhere in the UK these days and you can see why they sell okay. This country is full of them.