Mazda will expand its European SUV line-up from 2022 with the introduction of the new CX-60 crossover and larger CX-80 SUV.

The two new arrivals belong to Mazda's 'Large Product' group and will sit above the current CX-5 in the brand's new-look portfolio. That model, which has recently been updated, will not be directly replaced by the new additions, though, as it "remains one of the core models driving Mazda’s business globally". The CX-30 will also remain on sale.

The brand said: "To meet the growing needs of the segment, Mazda will offer European customers a wider choice of SUVs combining the latest environmental performance with the driving pleasure inherent in every Mazda."

The CX-60 and CX-80, offering two and three rows of seats respectively, will be Mazda's first European-market plug-in hybrid models, pairing an in-line four-cylinder petrol engine with an electric motor – a set-up likely to be sourced from strategic partner Toyota and related to that used in the 302bhp RAV4 PHEV.

Other powertrain options will include the all-new Skyactiv-X straight-six petrol and Skyactiv-D diesel engines, with a 48V mild-hybrid element integrated for reduced emissions and improved performance.

Alongside these new model introductions, Mazda will also finally begin offering the long-promised range-extender version of its MX-30 electric SUV. This will arrive in the first half of 2022 with a low-output rotary petrol engine that tops up the battery as needed – a similar arrangement to that once used by the BMW i3. 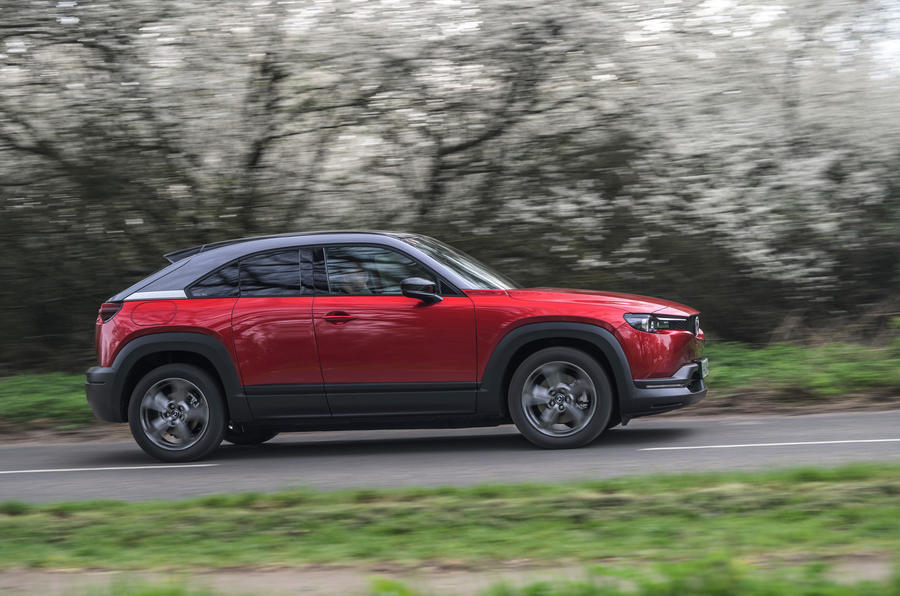 It will be the first deployment of rotary combustion technology in a mass-produced car since Mazda's own RX-8 coupé bowed out in 2012.

Later, in 2025, Mazda will usher in its first bespoke EV architecture, which will go on to underpin a range of models as the firm seeks to electrify its whole line-up by 2030.

But before that, the Japanese firm will launch the wider CX-70 and CX-90 to the US and Canadian markets, among others, while a smaller CX-50 will also be rolled out in certain non-European regions.

Mazda certainly like to be differrent. A MX-30 range extender a couple years after BMW started dropping their expensive range extender as people preferred the much cheaper version.

At 27k the MX-30 is a bargain in the BEV world, surely adding an option of a higher capacity battery will be cheaper and less complicated than designing an new model version in that price bracket, especially with battery technology improving all the time.

@xxxx Range extender or larger battery, it's an interesting dilemma. I wonder if Mazda are taking this route to offer buyers a different proposition. A larger battery would be heavier and more costly, but what's the cost and weight penalty of the ICE, ancillaries and petrol tank? However, having the ICE could give you more flexibility for longer journeys or where charging options are more limited. It'll be fascinating to see how the numbers stack up.