From £31,3598
Plug-in hybrid version of Toyota’s likeable RAV4 touches down in the UK with a claimed 46-mile electric range. We put this 302bhp SUV to the test
Open gallery
Close

Plug-in hybrids such as this new Toyota RAV4 are an interesting phenomenon.

With the ability to run for short periods of time on electricity alone you can see, on the one hand, how they might appeal as a safe, considered stepping stone in the journey from petrol power to a bonafide EV. On the other, they could just be nothing more than a cynical means of slashing your company car tax obligations - and one that’s a mere legislation change away from losing that prime positioning, too. But whatever your thoughts on the moral worth of these potential Cayman Island cars might be, this latest RAV4 PHEV is a pretty impressive example of the breed.

Mechanically speaking, it’s not too dissimilar to the standard Toyota RAV4 Hybrid. There’s a 2.5-litre, four-cylinder petrol engine up front that’s mated to an electric motor, and which together drive the front wheels through an e-CVT. At the rear axle, there’s a second, smaller electric motor that lends the Toyota all-wheel-drive capability. And, unsurprisingly, it’s based on the Japanese firm’s TGA-K architecture.

Of course, there are some key differences. The petrol engine now develops 182bhp instead of 176bhp; and the front electric motor’s output has been upped from the 118bhp figure it makes in the regular RAV4 Hybrid, to 180bhp here. The rear motor still produces 54bhp, but combined they lend the RAV4 PHEV a system output of 302bhp - making it the most powerful model in the range by a pretty hefty margin.

The lithium-ion drive battery is obviously larger, too. It has a gross capacity of 18.1kWh - pretty beefy by current PHEV standards - and is mounted beneath the floor to lower the car’s centre of gravity. Toyota claims a WLTP-certified range of 46 miles (so it slots into that desirable 6% BiK bracket), while a full charge can be delivered in 2.5 hours from a dedicated wallbox. 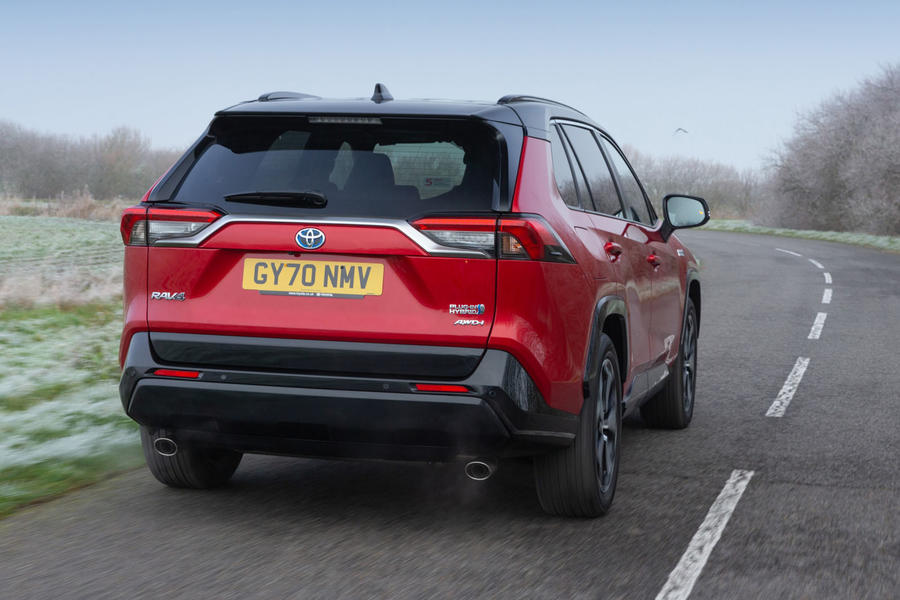 You’ve got a choice of four different powertrain operating modes here, which I guess sounds quite fussy but actually they all work quite well out on the road. Start the car and it defaults to pure EV mode. Provided there’s enough juice in the battery you can travel at speeds of up to 84mph, and even if you hit the kickdown switch to summon a well of acceleration, the ICE motor won’t spark up. Toyota claims a 0-62mph time of 10sec when running on battery power, and performance is brisk enough to keep pace with the traffic. Throttle response is excellent, and forward progress arrives in a smooth, seamless fashion.

Next is Auto EV/HV mode, which is effectively the same as regular EV mode, apart from the fact that the petrol engine will pipe up if you really mash the throttle. The transition from one power source to another is really smartly governed, and the petrol engine only makes itself heard if you stand on the throttle for prolonged periods of time. Then there’s HV mode, where the RAV4 runs as a regular hybrid (and a quick one at that); and finally there’s charge mode, which, well, charges the battery up while you’re driving.

One aspect of running a plug-in car that can really set your teeth on edge is the draining effect that cold winter weather can have on electric range. The Citroen C5 Aircross PHEV I currently have as a long-termer, for instance, has been struggling to get more than 17 miles from a full charge - which is significantly less than its minimum 33-mile claim. Preconditioning - the process of warming the car up while it’s still plugged in - is key here, and when run as such, the RAV4 PHEV really impresses.

Admittedly, I wasn’t able to match its 46-mile claimed range. But on a test route that took in all manner of dual carriageways, fast country A-roads and 20mph village lanes, the Toyota covered 36 miles before its battery gave up the ghost. And that was without me making a conscious effort to maximise efficiency, either. Then, when the car reverted back to running in regular hybrid mode, it still managed to average 49mpg over the remainder of our 90-mile test route.

It’s an impressive system, this; performance, efficiency and electric range are all really strong. Provided you have a home charger that you can plug into, I’d wager that trips to the petrol pump will be few and far between. That this powertrain is implemented into a car that also rides comfortably, handles smartly, and steers through a pleasingly thin-rimmed wheel that’s accurate in its responses and really quite nicely weighted is an added bonus. There’s loads of room in the second row, too, and the boot is still a usefully large 520-litre affair despite the packaging tweaks made to accommodate the bigger battery. 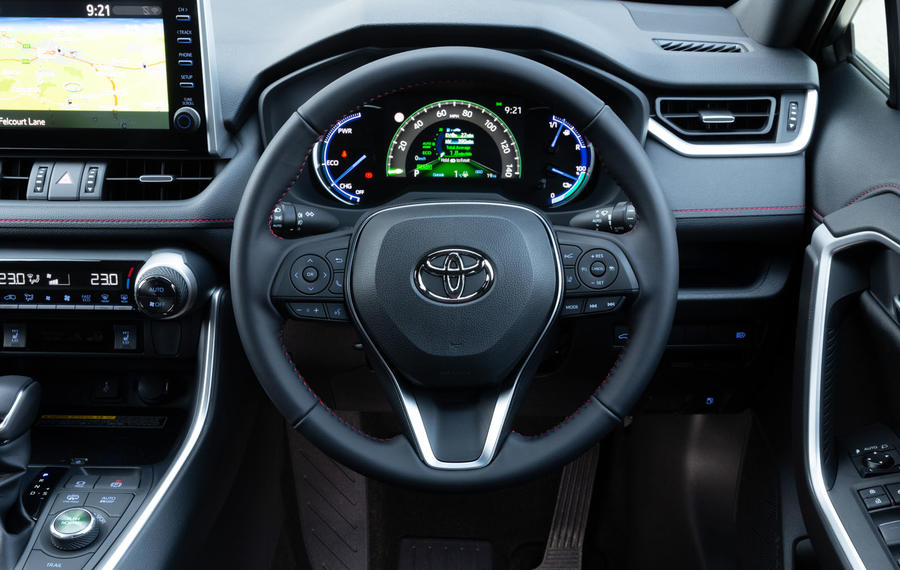 The only snag is the price. It starts at £47,395, so it’s a natch more expensive than the excellent plug-in Land Rover Discovery Sport that toppled rivals from BMW and Volvo in an Autocar SUV group test recently. It’s also a few grand pricier than the new Suzuki Across, which is effectively the exact same car only with a different badge on its nose.

Standard equipment is nonetheless generous, but it doesn’t have the premium allure of those upper-class competitors - despite feeling exceptionally well-built. Nevertheless, this is an easily recommendable PHEV SUV - provided you’re into such things. 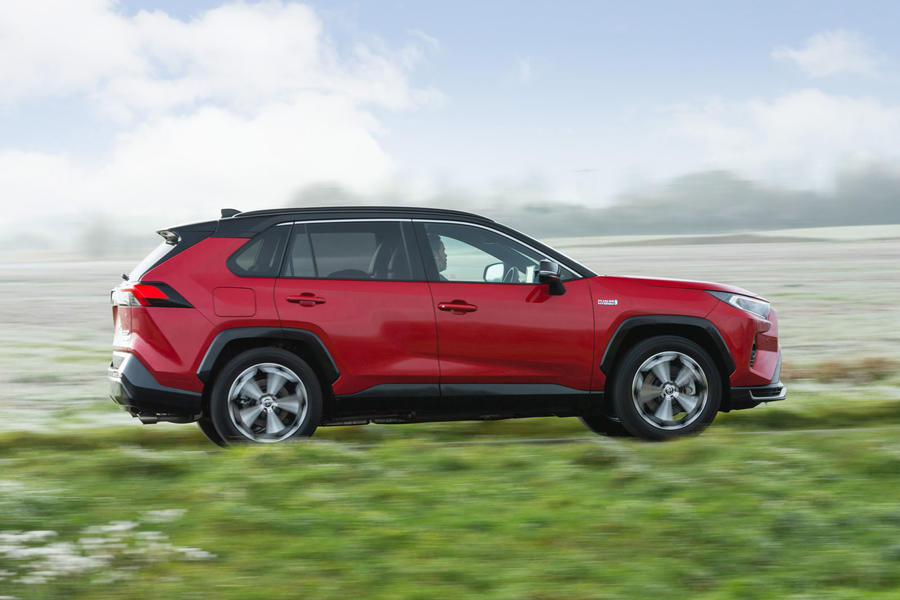 Log in or register to post comments
si73 26 January 2021
At LP in Brighton, since this won't allow me to reply or quote you, I'll just add it here. The reviewer states
it still managed to average 49mpg over the remainder of our 90-mile test route.

To me, this means it achieved that 49 mpg over the last 54 miles and is not a figure for the full 90 miles which needs correcting as you did to 29 mpg.

Only a total fruitcake would even consider paying almost £50k for a small SUV from a mainstream manufacturer. In BoJo's brave new electrified world, how will the average family be able to afford an average car like the RAV4? We're being priced outta the market ... which I suspect is the govt's long-term plan.

Only a total fruitcake would even consider paying almost £50k for a small SUV from a mainstream manufacturer. In BoJo's brave new electrified world, how will the average family be able to afford an average car like the RAV4? We're being priced outta the market ... which I suspect is the govt's long-term plan.

And what about the second hand market?, won't there be by 2030 nearly new or one, two year old Ev's?, it's not as if cars traded in are recycled, people make it sound like we'll going back to a Horse n Cart, yes, at the moment this is an expensive family car, and not many have an income for a new car, we've got almost a decade before ICE Cars won't be made, where do we think they'll all go?

“The only snag is the price” Quite so! On all other counts the Rav-4 has massive appeal. Toyota’s proven reliability. Practical, spacious, BIK tax efficient, But would you choose one over a Land Rover or BMW? Available at the same price? If only they had done a better job of the styling and not given it such an angry looking face!

“The only snag is the price” Quite so! On all other counts the Rav-4 has massive appeal. Toyota’s proven reliability. Practical, spacious, BIK tax efficient, But would you choose one over a Land Rover or BMW? Available at the same price? If only they had done a better job of the styling and not given it such an angry looking face!

A couple of things to consider re. Landrover or BMW. Toyota comes with lots of kit, the others are well North of 51K to match the spec.As all these cars are very much aimed at company car drivers, many of whom will get business miles reimbursement based on the official HMRC Aproved Fuel Rates (AFR).The sub 2.0L BMW and Landrover will only allow you 11p per mile meaning you will need to maintain 47mpg+ to not literally be funding your own job!  My bet is especially the Disco Sport will not manage anything like that.The Toyota being over 2.0 (2.5) would be reimbursed at 17p per mile meaning a breakeven average of only 30mpg which the car will do easily - charged or not!For me the Landrover or all the German PHEV's would be financial suicide! as I would be paying out myself towards miles done for my work, and there are a lot of them!In the Toyota I would turn a nice little profit for every mile driven instead.