Land Rover has heavily updated its Discovery Sport best-seller with a range of new electrified engines, a new platform and a major interior upgrade to take on premium rivals such as the Volvo XC60 and Audi Q5.

Despite that, sales have tailed off as the Sport has lost ground to a fresher set of rivals, so this new version will be crucial in attempts to turn around the struggling fortunes of Jaguar Land Rover (JLR).

The five- and seven-seat model switches from Land Rover’s D8 platform to the new Premium Transverse Architecture used by the second-generation Range Rover Evoque, which is also built at the firm’s Halewood plant. This new platform allows for the adoption of electrified powertrains and the 48V mild-hybrid system introduced on the Evoque features on the bulk of the Discovery Sport’s launch powertrain line-up. 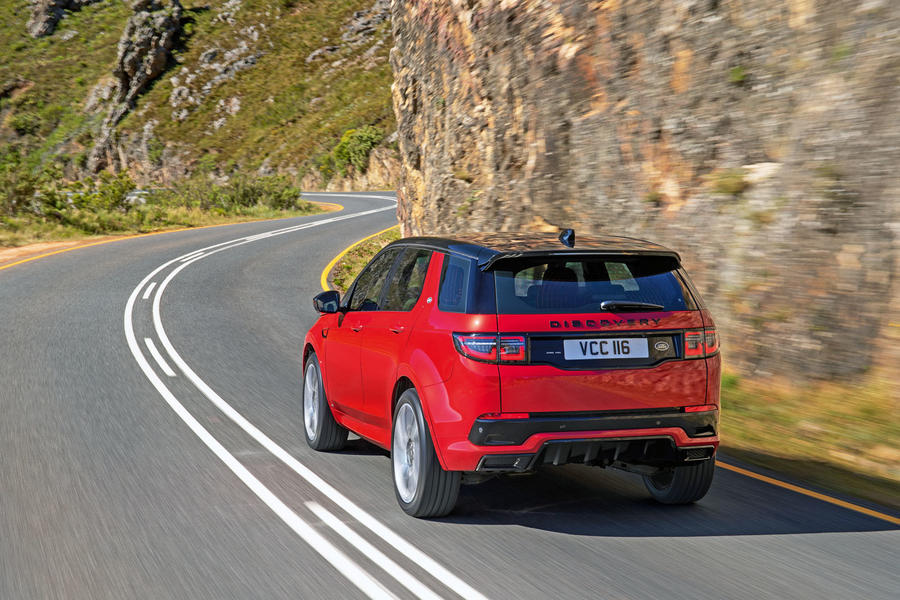 The system, which uses an engine-mounted belt-integrated starter/generator mated to an underfloor battery, means that the Discovery Sport offers fuel consumption from 40.9mpg, with CO2 emissions from 144g/km (NEDC equivalent figure converted from WLTP). A full plug-in hybrid version will follow later this year.

The entry-level model – and only non-mild hybrid – will be the front-wheel-drive version of the D150 diesel, offered with a six-speed manual and providing 148bhp and 280lb ft of torque. All other versions feature all-wheel drive and use a nine-speed ZF automatic gearbox, which has been updated to improve fuel economy on its own by 2%.

The highest-performing launch version will be the P250 MHEV, which features 246bhp, 269lb ft and a 0-60mph time of 7.1sec. Other engine options will be 178bhp and 237bhp diesels and a 197bhp petrol. As with the Evoque, the all-wheel-drive system features the latest version of Land Rover’s Terrain Response 2 system, with four drive modes to adjust the all-terrain technology as well as an auto option that detects and adjusts for the conditions itself. It also offers Driveline Disconnect, which sends power to only the front wheels during steady cruising to further increase efficiency. 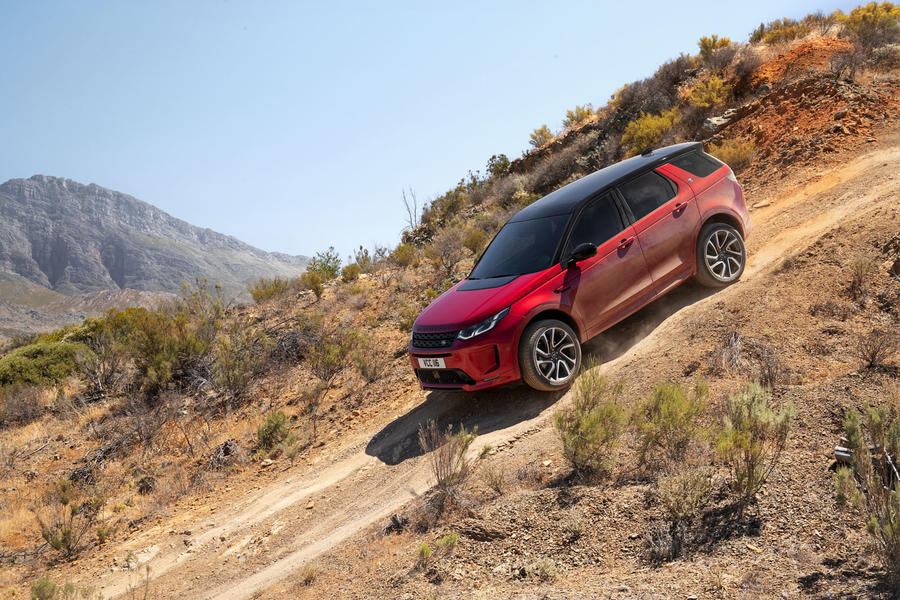 All versions ride on coil springs, with an Adaptive Dynamics system that uses variable suspension dampers to monitor and adjust to road conditions. The new model is a similar size to its predecessor. At 4597mm long, it’s 2mm shorter. It’s also 3mm taller (at 1727mm) and has an identical width of 2173mm with its door mirrors unfolded. The wheelbase of 2741mm remains unchanged.

Land Rover has worked to ensure that the Discovery Sport remains a capable off-road machine when required. Along with the new drive mode systems, it offers ground clearance of 212mm and 25deg approach, 30deg departure and 20deg breakover angles. It also has a 2500kg towing capacity, with an optional Advanced Tow Assist feature to aid with manoeuvring.

The new version of the Discovery Sport maintains the styling cues of the popular original, updated with a number of tweaks to bring its design in line with the second-generation Evoque and Range Rover Velar. The exterior changes focus on new front and rear bumpers, a revamped grille, new lower body mouldings and LED headlights.

The interior has been more extensively revamped and Land Rover’s latest infotainment and technology systems have been adopted. The firm’s Touch Pro infotainment system is standard. It features a 10.25in touchscreen and is now compatible with Apple CarPlay and Android Auto. A lower interface, which incorporates controls for the heating and ventilation systems and Terrain Response, is offered as an option. 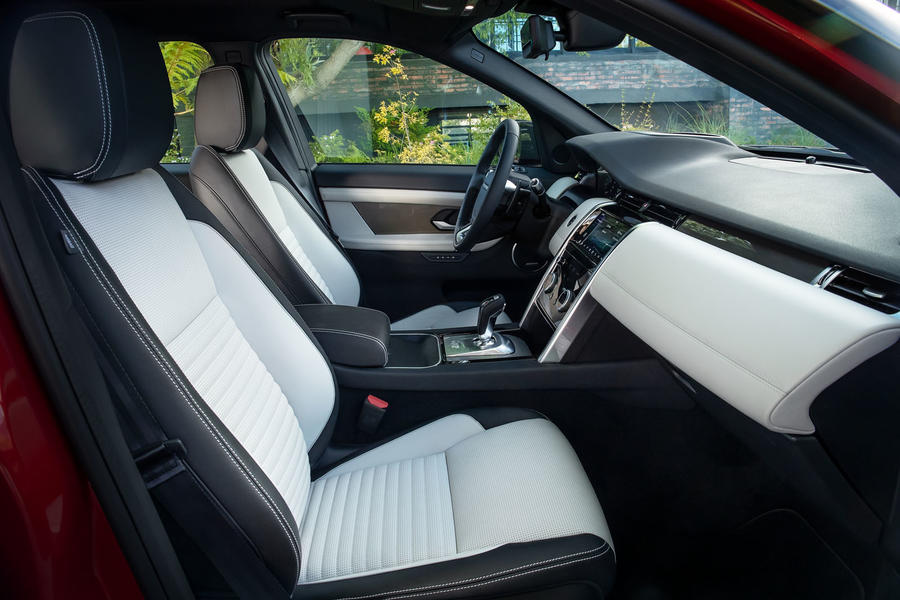 A 12.3in digital driver display is also available, along with a colour head-up display. An optional wireless smartphone charger is offered, as are up to eight USB ports. Passengers in the second row of seats also gain temperature and fanspeed controls.

The Discovery Sport’s driver assistance technology has been upgraded, too. New features include the ClearSight Ground View system originally introduced on the Evoque.

This ‘invisible bonnet’ concept uses cameras in the front grille and door mirrors to project a feed onto the central screen showing what is underneath the vehicle, to aid manoeuvring in tight city streets or off road.

Accompanying this is a new ‘smart rear-view mirror’, which works as a normal mirror but on request will use an HD screen to display the feed from a rear-facing camera with a 50deg field of vision. Land Rover says this will ensure better rear visibility when the car is full and in low-light conditions. Among the other driver assistance features are front and rear parking aids, a rear camera, autonomous emergency braking and lane keep assist. A number of packs offer extra options. 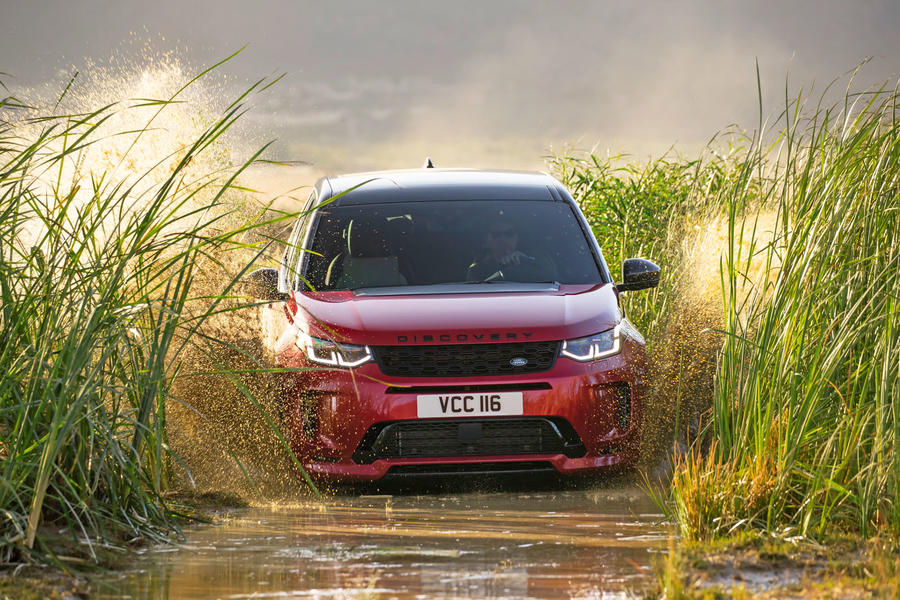 As well as upgrading the technology inside the Discovery Sport, Land Rover has also worked to increase the model’s practicality and comfort. The three seating rows have been designed to offer more versatility, with a new 40/20/40 split in the second row of seating that, the firm says, offers up to 24 seat combinations.

There’s leg room of up to 968mm in the second row and 655mm in the third. There has also been a focus on increasing storage in the cabin and Land Rover claims the central cubby and redesigned door bins offers 48 litres of storage, a 25% increase on the previous model’s. In five-seat form, the boot capacity to the roofline is 1179 litres – up from 981 in the outgoing Discovery Sport – rising to 1794 litres with the rear seats folded. The firm has also increased the fuel tank capacity from 54 to 65 litres.

The new Discovery Sport is available to order now. It’s offered in Sport, S, SE and HSE trims, along with an R-Dynamic version that has additional design flourishes.

Opinion: Discovery Sport is such a crucial car for JLR​

Of all their models, I like the Disco Sport the most as it fits what I want best. Alas, without a proper hybrid powertrain (not these piddly bolt on souped up starter motor 48V systems) its too much BIK for my wallet, unless I went povety spec 2WD manual weedy 148bhp diesel..erm, no thanks. LR, when you get a 4WD Auto 130g/km 175bhp+ gimme a call and be happy to test drive one.

At least they've not managed

At least they've not managed to work those plasticcy flush door handles into this model.

I've always thought that the Disco Sport was one of JLR's best designs, one which looked right for its market. I'm not sure that the smoothed off front end works as well, though. It makes you wonder how the company dropped the ball so badly when it came to the proportions of the Disco 5, and, to a lesser extent, the Velar.

I agree about proportions of the Disco 5

and I'm hoping they will manage to correct it at a mid-life redesign, but most commentators seem to love the Velar. What do you see as the problem with it?

and I'm hoping they will manage to correct it at a mid-life redesign, but most commentators seem to love the Velar. What do you see as the problem with it?

Squashing the roof down has made the rear overhang look too long, in my opinion. Looks ok from birds eye view though.