The new Honda Civic Type R has set a new lap record for a front-wheel-drive car at the Suzuka circuit in Japan ahead of its official launch later this year.

Pictured with the same red-and-black distorted livery in which it was seen testing last year, it rounded the 3.6km circuit in 2min 23.120sec - 0.873sec faster than previous record-holder, the Civic Type R GT Limited Edition.

We still don’t know the new hot hatchback's performance figures, but the broken record suggests that it could gain a slight boost in power.

Official acknowledgement of the development of a new Civic Type R was declared for the first time last October, with Honda confirming the next iteration of its rival to the Volkswagen Golf R would be launched in 2022.

The Civic Type R is now said to be "ready for Nürburgring testing". 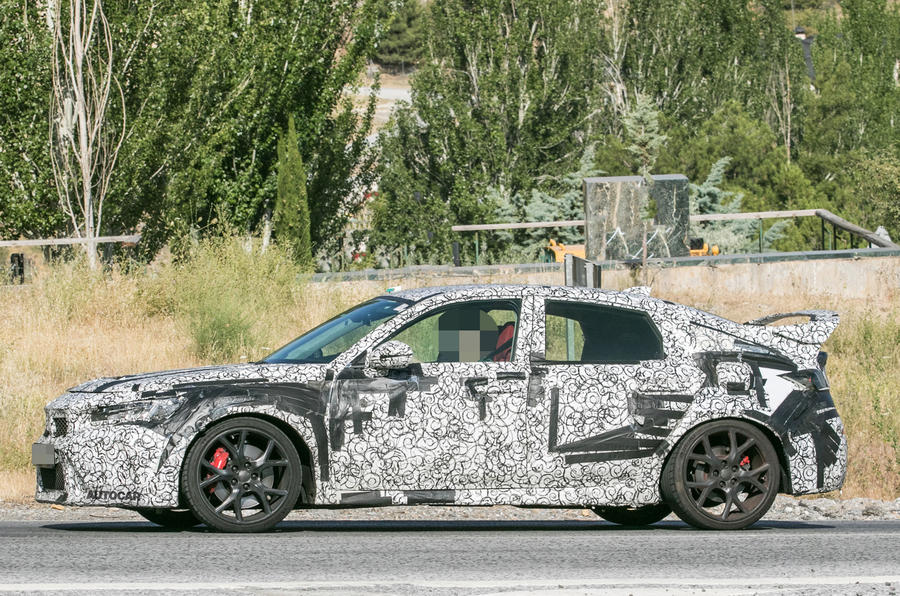 A close look at our spy shots reveals the spoiler features a new raised mounting, while the smaller lip spoiler on the bootlid no longer appears to dissect the rear window. Further visible changes include a lower shoulder line, a lower bonnet line and lower headlights, as previewed by the reveal of the standard Honda Civic hatchback ahead of its European market launch in 2022.

Honda has accelerated its electrification plans with the aim of making all of its European sales electrified by 2022, but notably that goal applies to only the brand's "mainstream" products. The Civic Type R is an enthusiast-oriented proposition that accounts for only a small percentage of European sales.

So it remains a possibility that the Civic Type R will forge ahead with an upgraded and enhanced version of the current car's 2.0-litre turbo four, which sends 316bhp to the front axle for a 0-62mph time of 5.8secs and a top speed of up to 169mph.

But it has also been suggested that it could use a hybrid powertrain linked in concept to that of the Honda NSX supercar, which mates a twin-turbo 3.5-litre V6 with three electric motors. It's unclear whether that means four-wheel drive, but it's likely if Honda goes full-hybrid in this way.

Ten months or so on from my last post about this Car, and it's changed little, so it's going to have a little more go, only just under a second faster?, not much, is it?, Honda are going full EV just like the rest, this Car being a niche car in there Eyes will still be made, it may have some EV help, only time will tell, and Honda haven't got something to replace it for now, and there are more and more Cars now and coming which will better it.

I actually quite liked the look of the current Honda Civic Type R. Although each to their own.

Well,it's more than a year since I put up an opinion on this Car,and, I'm afraid it's changed a bit, the type R isn't the only weapon of choice for the now, function over form doesn't essentially matter now it seems,and as these cars start to get heavier, how they handle matters more than how performance comes from the powertrain, there are lovers and not lovers of this Car,just as you get with any other brand,it's a Car, if it makes you happy, who cares what others say?