BACK TO ALL NEWS
Currently reading: New Genesis G70 on sale in UK next month from £33,850
UP NEXT
First drive: 2022 BMW XM prototype

The Hyundai Group’s luxury brand, Genesis, continues to expand its European line-up following its recent entry into the region, with the G70 saloon and its GV70 SUV sibling arriving in dealerships next month.

Priced from £33,850, the G70 is a direct competitor to the Audi A4 and BMW 3 Series. It made its debut in the US in 2017 and has now undergone a mid-life redesign, with external tweaks most significant at the front end, where a new hexagonal grille combines with slim LED quad-headlight strips, replacing more conventional clusters.

Furthering the “athletic” visual overhaul is a new side profile in which the L-shaped chrome wing trim is replaced by a more purposeful air duct closer to the front wheel.

At the rear, the single-unit lights are replaced by two LED strips on either side, mirroring the front. A new combination mesh-and-body-colour diffuser-style rear bumper completes the overhaul, along with new wheel designs.

It's available exclusively with rear-wheel drive from launch, equipped with either a 2.0-litre turbocharged petrol engine or a 2.2-litre diesel. An eight-speed automatic gearbox is fitted across the range. 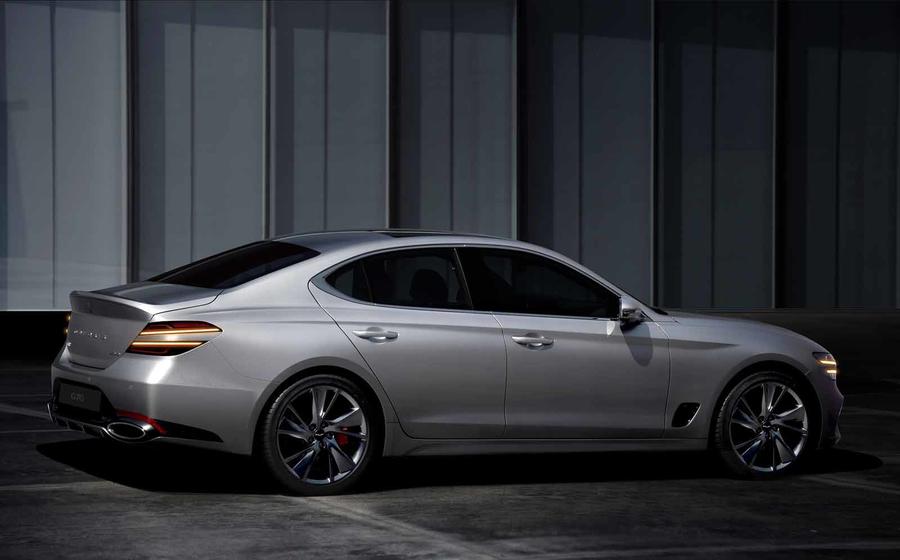 Inside, Genesis says the updates “leverage a driver-centred architecture resembling a fighter jet cockpit” with enhanced technology. Chief among them is the introduction of a new 10.25in infotainment screen with a fresh user interface supporting wireless software updates, Google CarPay and a redesigned wireless smartphone charger.

The G70 and GV70 follow the larger G80 and GV80 luxury duo onto the market as Genesis rapidly expands its product line-up in an effort to do battle with the European premium segment stalwarts: BMW, Audi and Mercedes-Benz. An estate-bodied Shooting Brake version of the G70 was revealed at the Goodwood Festival of Speed last month, and will be priced up ahead of an on-sale date "shortly after" the saloon.

Three problems faced by Genesis in the US - will they affect it in Europe?

1. The dealerships are shared with Hyundai not separate like Lexus so buyers face a non-professional environment. Genesis tries to combat this with every effort to keep one away from the dealership but ultimately that requires changing a customer and owner experience model which is both well established and prevalent with all other brands.

2. Used values are very low driving the leasing cost of a Genesis to exceed more pricey alternatives from established brands. Exec cars are dominated by leases in the US so this is major sales inhibitor.

3. They are cheap inside and out. I sat in a top of the range Genesis G90 at the LA Auto Show a few years back - the armrest was hard, the metal looked like plastic, the grill didn't look like real chrome. It will fool those moving up from lesser brands or buying from online pictures, but buyers used to a luxury car feel will soon spot the cheapness.

Genesis is the new Lexus in the USA

Genesis is fast becoming the new Lexus here in affluent parts of the USA. Great value, great build quality, tech heavy and very attentive dealership customer service (eg driver brings same Lexus car to your location, takes yours away, returns yours after service to your location). I don't own one, but if I was going to buy this style of vehicle Genesis would be top of my list. Will be interesting to see whether the European and British dealers provide the same level of customer service?

Like everyone else i can see bits of other cars designs in it, but the overall impact is a great looking car. Of course for a private buyer the question will be how well does it drive, and what mechanical options will it have. In truth i know due to CO2 legislation they wont be making (or at least selling in Europe) a version with any appeal to anyone who isnt a company car driver.

Good effort but its come 15 years too late