From £56,9207
Hyundai's luxury brand makes its UK debut with a seven-seat SUV to rival the Mercedes-Benz GLE
Open gallery
Close

This is Genesis's first SUV, the GV80, which uses the same mixed-metal platform as the G80 luxury saloon that we reviewed only earlier this week (its driveline and suspension are closely technically related also). Go for the bigger offering, however, and you will get rear-biased four-wheel drive as standard, as well as seating for up to seven.

Diesel stalwarts, meanwhile, can trade up from the G80’s four-cylinder oil-burner to get the Hyundai Motor Group’s brand-new 274bhp diesel straight six if they pick the GV80.

On paper, then, considering the fairly modest difference between the cars on showroom price, the GV80’s offering looks like quite the package. Perhaps that’s why Genesis expects it to outsell the G80 in Europe for the time being; well, that and the obvious reason (because it’s an SUV, Pinky).

The other engine offered in the car is Genesis’s 300bhp 2.5-litre four-pot turbo petrol, with barely a cigarette paper separating the two motors on price.

Buyers will choose between Premium and Luxury trims, just as on the G80, plus five- or seven-seat body configurations, with options mostly corralled into a limited number of packages intended to make the ordering process more straightforward. 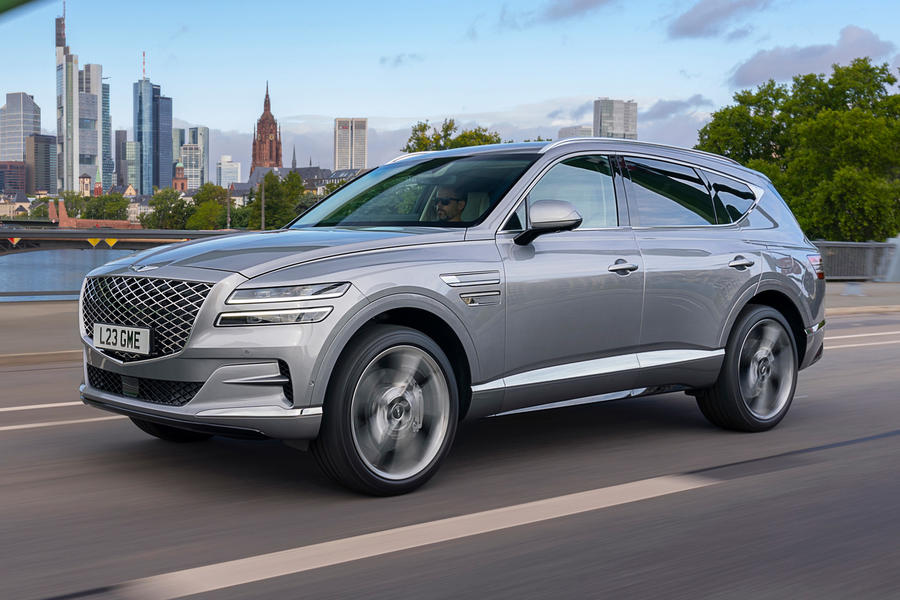 The GV80’s cabin has an even headier, chromier and more enticing aura of luxury about it than the G80’s – and that’s no mean compliment. Leather is used even more widely and to even richer effect in the bigger car; open-pore birch-wood veneer is another appealing material highlight; and the glass-topped rotary gear selector and infotainment controller gleam invitingly like the family jewels on the transmission tunnel. The fixtures and fittings, to a switch, lever, knob and button, all look and feel really very appealing indeed.

On cabin space, the car bears comparison with its full-sized luxury SUV rivals in the front two rows; and while the third row may not offer quite the adult-sized accommodation of one or two of its opponents, there is plenty of seat-sliding adaptability to be utilised if you need it. The slightly bigger-booted five-seater version can swallow up to 735 litres of cargo with the third-row seats folded down, which is enough to beat the Mercedes-Benz GLE, albeit not quite every other rival.

This is quite clearly a much larger and more versatile car than the G80 saloon, then, and it feels that way on the road. The greater size and weight and the higher body profile of the GV80 relative to the G80 do show themselves a little in the ride and handling.

The SUV feels even more softly sprung and comfort-biased than the lower, leaner saloon. At a just-so pace on just the right surface, there’s a certain land-yacht glide to the way that it addresses the road, which can be quite pleasing to sample.

The steering is medium-paced but light and slightly woolly in feel, the brake pedal likewise big on power assistance. These are matching attempts to take the physical strain out of the act of driving the car, but which as often as not actually only makes it feel detached and a little vague.

On more testing roads taken more quickly, the GV80 can struggle to maintain good close body control and a settled-feeling primary ride, however. It joggles laterally on its axles over drains and other asymmetrical inputs, pitching and lolling in a way that certainly isn’t the last word in comfort. The long-wave compliance that might be the car’s greatest dynamic selling point on A-roads and motorways becomes unwelcome sloppiness on B-roads and at higher speeds, then; and while firming up the adaptive dampers using the Sport driving mode improves its lateral body control a little, it’s a somewhat tokenistic fix.

So too can the GV80’s optional 22in alloy wheels thump and fuss away over broken surfaces to the notable erosion of the ride isolation you might expect of it. Those bigger rims can be avoided if you order the alternative 20in rims, and buyers who want a big SUV that fulfils every last bit of its potential as a luxury car would be well advised not to look past that option. Without them, the GV80 is no light commercial vehicle: it’s generally very quiet and refined, easy enough to place, fluent through gentler bends and pliant and serene when the suspension is only fairly gently exercised. But it’s a car whose blanket of ride sophistication extends only so far.

Its diesel straight six is certainly a good advert for the Genesis brand, however. On this evidence, it’s as responsive, smooth, strong and ready to rev as any like-for-like six-pot diesel with which you might compare it from Mercedes or Land Rover, and it probably operates even more quietly than some of those rival options. Near inaudible at low revs, it drives the car effortlessly thanks to fast and intuitive automatic gear selection, and it can put on speed at a rate belied by the lack of apparent mechanical effort being made. 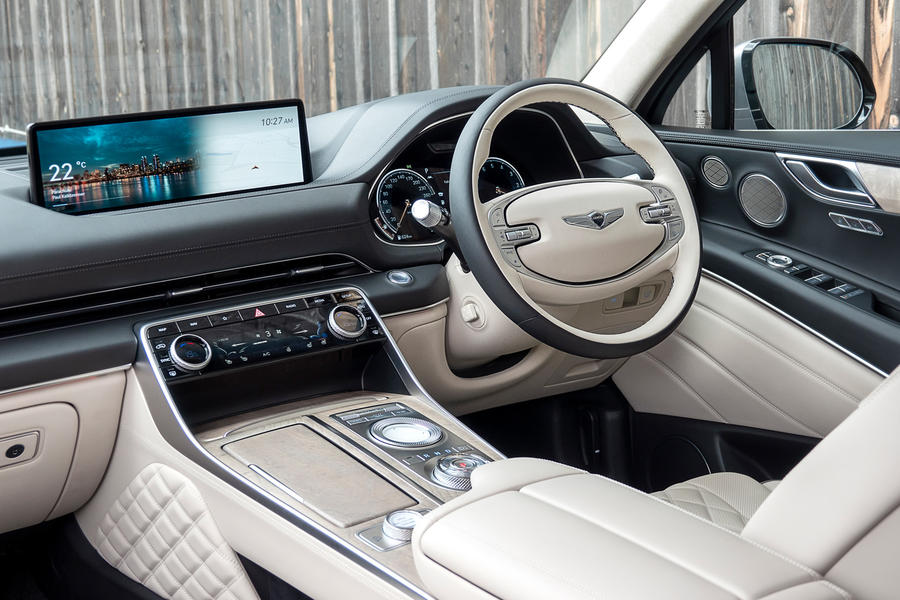 Whether you should consider the GV80 will depend, I suspect, on how you feel about Europe’s more established premium automotive players; whether you’re quite ready for a fresh take on modern luxury; and whether you like Genesis’s own bold but slightly generic interpretation of exterior design.

I for one quite like the idea of a luxury car that's turned into a kind of personal service. To me, though, the GV80 and its peers currently look a bit like those doctored cars that you see in insurance adverts; they’re handsome enough, if a little, well, strange. But of course they're strange-looking now; ask me again in a year’s time, when we’re used to them, and Genesis well could have the best-looking range of luxury cars on the road.

If you do find the GV80’s looks growing on you over the coming months, there’s plenty else to recommend it. For mechanical refinement, versatility and lavish luxury ambience, it would take some beating by any SUV in its class. In other ways, it’s a biggish mid-life improvement away from really hitting its straps on ride comfort, body control and intuitive good handling.

We should remember, though, that this is as large and heavy as Genesis’ cars will get – on European roads, at least. Perhaps that grants it permission to ride and handle with a certain old-school luxury flavour. 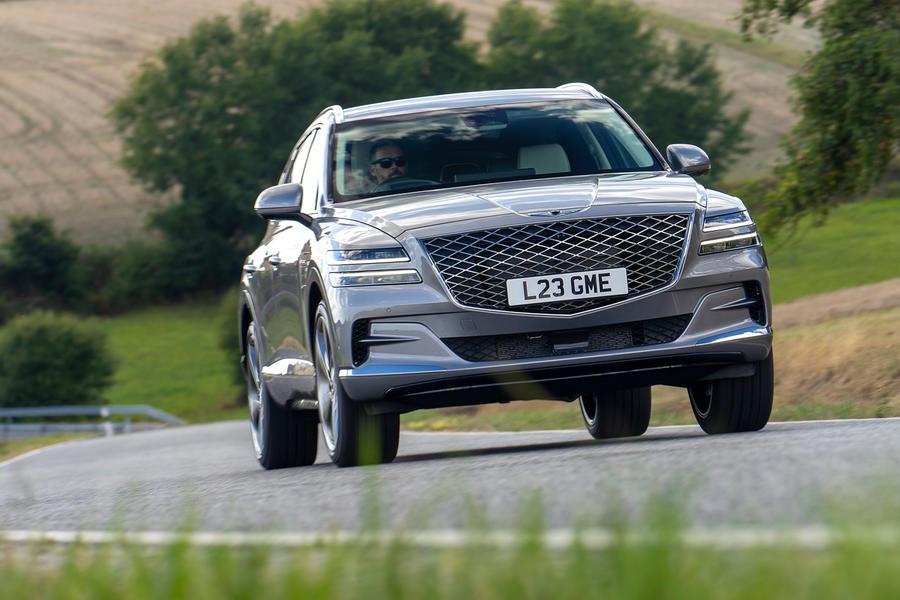 Log in or register to post comments
Commenter 11 June 2021
Styling at the rear tries a bit too hard to be confused with the Macan if not for the wedge. Judging purely by exterior the comparably sized new model enlarged Sorento, Palisade and Telluride all look far less generic and better.
Gerhard 10 June 2021

Many comments here about Range Rovers and lots of nonsense about poor reliability, but nobody here has actually lived with this GV80 for anything less than a few days so its reliability cannot be proven to be good or bad in comparison to the wildly-popular Ranger Rovers (not R&R, btw...). Genesis is a new brand in Europe from a lower-end brand and European buyers will know this. It cannot expect to compete in similar numbers straight out of the gate and -judging by the mediocre effort here- it won't be ahead of the pack any time soon.

Like Infiniti, it will be a footnote in the history of  the European car market unless it manages to produce more cutting-edge cars.

Really not sure who this is aimed at and who will buy one. It’s sort of attractive in a brash Bentley sort of way. But those with Bentley money to spend are unlikely to consider a Genises. It’s not rugged enough to appeal to the Country set, who will stay with their Land Rovers or Range Rovers. Audi and BMW drivers will scoff at the imitation Bentley badge and dismiss it. Perhaps there will be a few people out there who wants a lot of flash for not too much cash and take the plunge. They may well end up keeping it for a very long time and running it in to the ground as the residual value will be so