BACK TO ALL NEWS
Currently reading: New Audi A3 Sportback and saloon go on sale from £22,410
UP NEXT
Alfa Romeo to revive GTV as an EV in sweeping range renewal

The new Audi A3, featuring a dramatic overhaul inside and a mild-hybrid powertrain for the first time, is now available to order in the UK, priced from £22,410.

Both the saloon and Sportback variants have arrived on the market at the same time, despite staggered unveilings. The saloon is available in four trim levels, while the Sportback gains an additional Technik entry-level trim, which comes equipped with 16in alloy wheels, LED headlights, Audi's new MMI infotainment system and a 10.25in virtual cockpit as standard.

The tried-and-tested styling of Audi’s best-selling model in Europe remains, although the company has tried to make it look sportier to address the absence of a three-door model, which was culled during the previous generation.

Audi’s new A3 has a nearly identical footprint to its predecessor, at 4.34m long and 1.43m high, but is 3cm wider, at 1.82m, giving more elbow and shoulder room for passengers.

The model receives digital daytime-running lights for the first time, made up of 15 LEDs, allowing each trim derivative to have an individual light signature to set them apart. 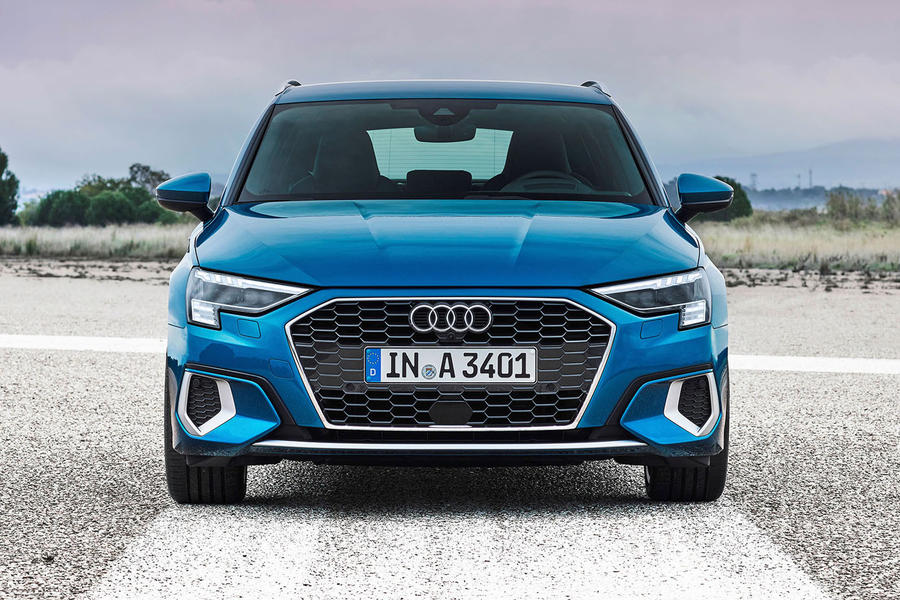 The engine line-up at launch is a 148bhp 1.5-litre four-cylinder turbocharged petrol unit (TFSI) and a 2.0-litre diesel (TDI) with 114bhp or 148bhp. Soon after, a 108bhp 1.0-litre three-cylinder TFSI will launch alongside the most notable unit: a second version of the 1.5 TFSI with mild-hybrid technology. This will mark the first time the A3 has been offered as a mild hybrid, although a petrol-electric plug-in hybrid (PHEV) entered production in 2014. Two PHEV variants of the new model will go on sale at a later date.

The mild-hybrid A3 uses a belt-driven starter-alternator to feed a 48V system that can recuperate 16bhp during deceleration and gentle braking. It can also glide with its engine off for up to 40 seconds. There are no official plans to add this tech to other engines in the A3, but powertrain engineer Michael Vogl said that it could be integrated into almost any powertrain.

“This system helps us to achieve our goals and helps our customers to save fuel,” said Vogl. “There are low cost increases and low weight increases but an improvement of 10% in consumption.”

Following the first wave of engines, further TDI and TFSI options will arrive, including some with Audi’s quattro four-wheel drive system. 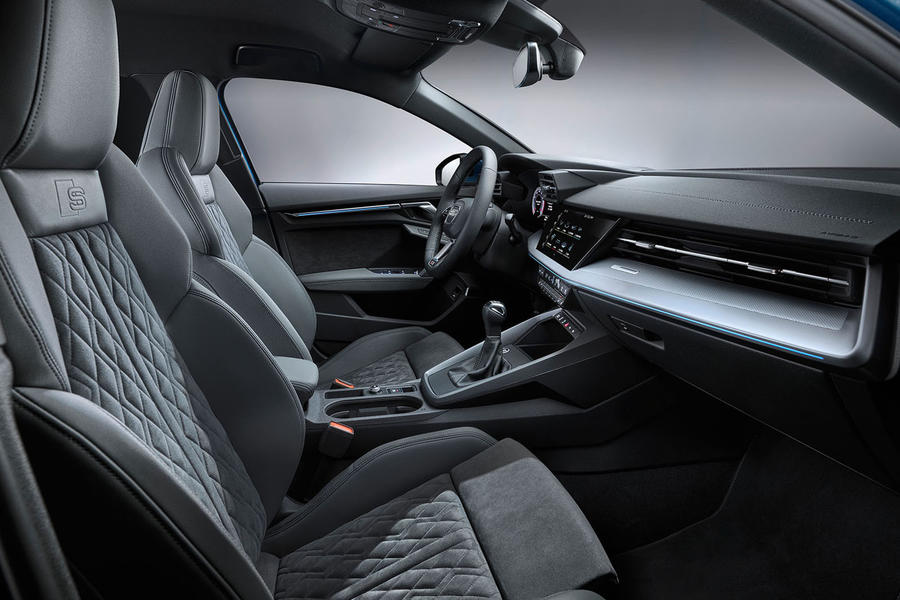 The flagship S3 and RS3 performance models will be launched later this year. The former, which we have already driven in prototype form, delivers 306bhp from Volkswagen’s 2.0-litre four-cylinder turbo engine, while the latter will continue with its trademark five-cylinder unit, as found in the new Audi RS Q3.

For those familiar with the A3, the interior is most noticeably changed. Audi has taken the controversial but increasingly popular route of minimising physical controls, ditching the rotary controller for the infotainment system on the centre console.

A new shifter for the dual-clutch automatic gearbox sits in a black gloss surround, close to a round, sensory volume controller that reacts to circular finger movements.

There’s a 10.25in digital instrument display and a 10.1in infotainment touchscreen angled slightly towards the driver, while a new climate control unit below it replaces rotary dials with buttons.

The A3’s electronics project manager, Melanie Limmer, said the decision to remove some physical buttons was made as “more and more people are getting into touch functions with smartphones” and claimed that the new system is as user-friendly as the previous one. 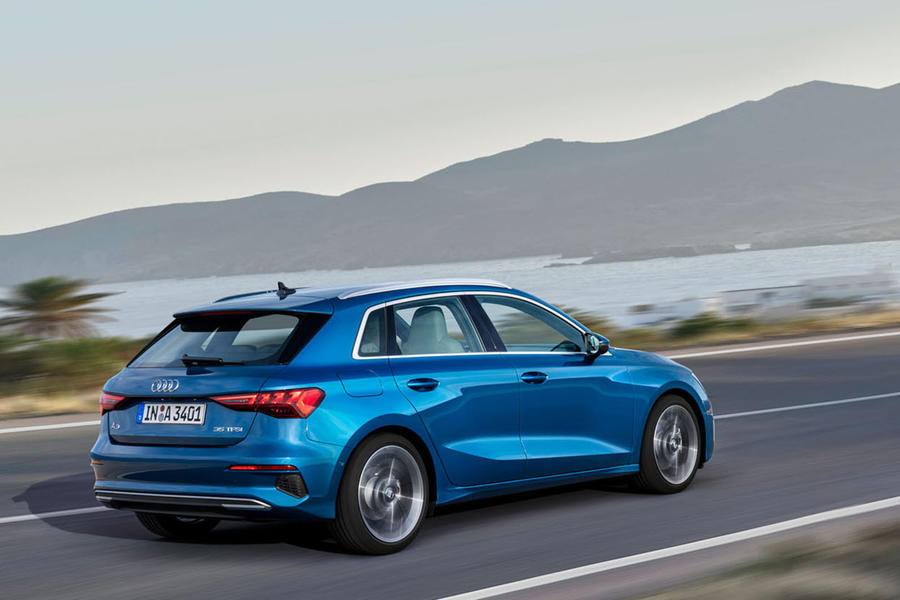 Digital features include up to six user profiles, a wi-fi hotspot, handwriting recognition and improved natural voice control. For example, ask “Where’s the nearest Italian restaurant?” and the sat-nav system will show those nearby.

As well as Apple CarPlay and Android Auto, Amazon’s Alexa voice assistant will become available by this summer.

Audi promises that the new A3 offers better comfort and dynamic properties than its predecessor in all of its forms, but particularly when aided by optional adaptive damper control, progressive steering and four driving modes.

Its MQB II architecture, which it shares with the new, eighth-generation Volkswagen Golf, is claimed to be lighter yet also more rigid than the platform it replaces.

The five-door hatchback and four-door saloon won’t be the only A3 bodystyles to hit showrooms. The absence of the three-door hatchback means no A3 Cabriolet will be produced this time, but Audi plans to introduce a high-riding A3 Allroad model in its absence, with crossover-like styling and a chassis tuned around all-season tyres. This is set to challenge the new Mercedes-Benz GLA from the end of 2021.

Autocar understands that there are also plans for a Mercedes-Benz CLA-rivalling five-door liftback, which is expected to arrive next year. 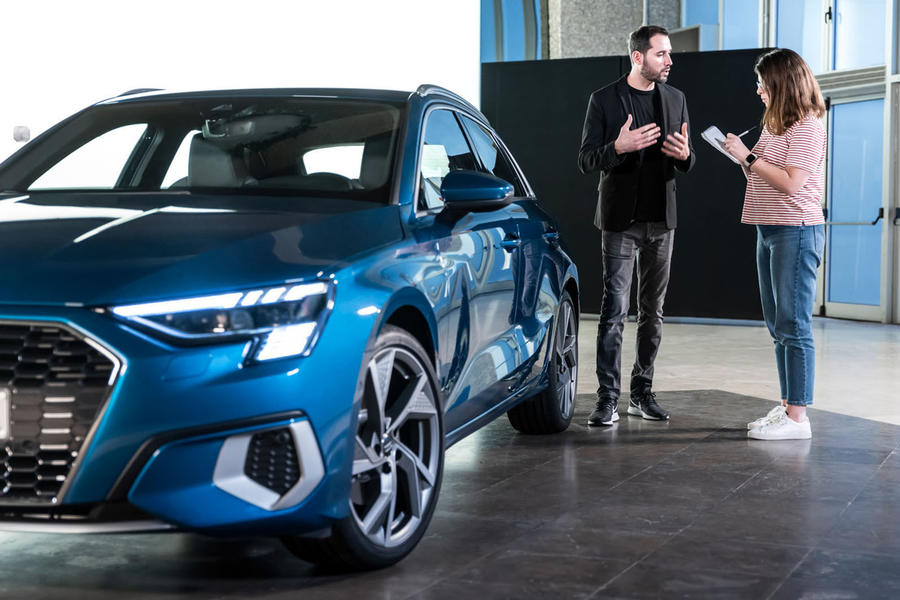 What was your goal with the new A3?

“We had a clear goal with this generation: we wanted to bring more typical hot hatch properties. The proportions are much sportier than in the previous generation and the roof line is lower, more dynamic. We don’t have the sporty three-door A3 now, so it was important to bring sportiness to the Sportback.”

What was your inspiration for the new A3?

“One reference point was the Lamborghini Countach. The A3 has the same high shoulder line [on the sides], but it’s obviously more extreme in the Countach. There’s this really dominant line [on both cars] and the surface of the bodyside faces down. It’s the first time we have the bodyside of an RS model in the A3.”

How much did you have to stay true to the A3’s well-known design?

“It’s always a balance we need to find. This is still an A3, but the car needed to stand out more on the road. The outgoing car is a great car but it needed more character, in my opinion.”

Will anything from this A3’s design carry over to other Audis?

“We returned to a typical shoulder line, but it’s higher than the lower levels of other Audis. We’ve been criticised in the past for using the same elements on too many cars. We want a specific character for each model.”

Yes, it's a bit gawky looking, and the Dash is a mess, the air vents were placed ther for the because the info screen took up so much space.

Looks they just lowered a Q3 and changed the letter.

Its good that Audi have at

Its good that Audi have at least kept seperate climate controls, as a close cousin of the Golf and Leon I'd have expected them to disappear. I can't agree that buttons are as user friendly as the three dial previous system, and I'm sure a lot of people are missing Audi's MMI control knob. As for the exterior, its much as you'd expect, and doesn't appear any more 'sporty' to me than the previous sportback.