Future Audi SUVs will resemble this AI:Trail concept, says Audi design boss Marc Lichte, predicting such a car could arrive as soon as 2030.

The wacky, off-road concept, unveiled at the Frankfurt motor show, is the fourth and final AI concept. The four concepts, the AI Trail, AI Race, Aicon and AI:Me show Audi’s vision for shared motoring, with subscribers able to choose the car that best suits them at any given moment.

“In future, we will change from owning [a car] to accessing a car,” said Lichte. “If you can order your car for a specific use, this will change the design of our cars. You can design with no compromises. The AI:Trail is how we imagine a future Audi SUV could look.” 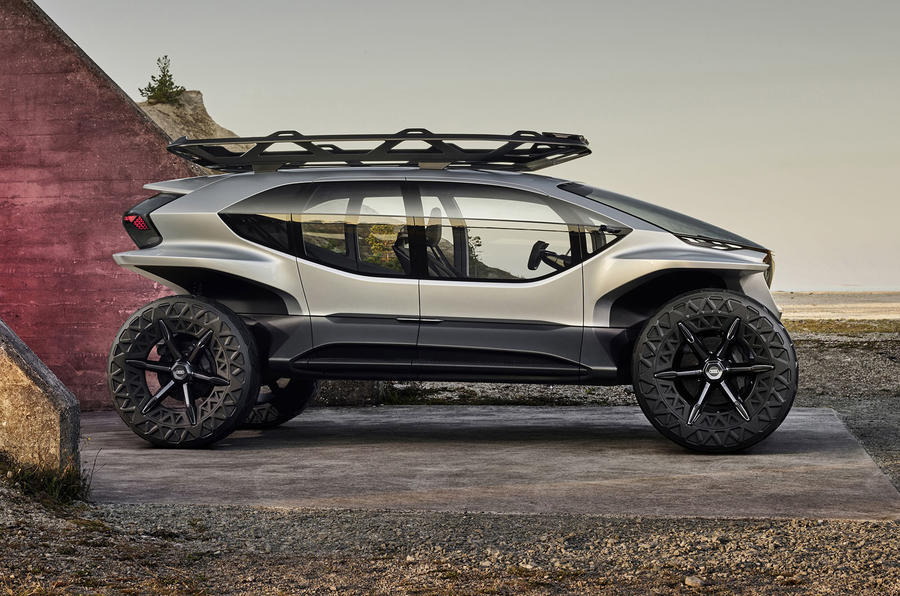 The electric, four-wheel-drive concept is a similar length to a Audi Q3 at 4m15 but with a longer wheelbase, while its 2m15 width is on a par with a Audi Q7.

It uses four electric motors, each sitting near a wheel, and collectively producing 429bhp and 738b ft. It has a top speed of 81mph and a range of 249 miles on-road and 155 miles off-road.

The AI:Trail does not sit on any existing platform, but takes certain elements. For example, the underfloor battery is taken from the Volkswagen Group’s MEB platform and the powertrain is from the PPE architecture, shared between Audi and Porsche.

The radical design includes a belt line which is the same height as the arm rest, rather than at shoulder height. “This is a first for Audi,” explained Lichte. “Normally, we have a small greenhouse, high belt line, massive body. We did exactly the opposite. It’s almost a 360deg view while driving.” 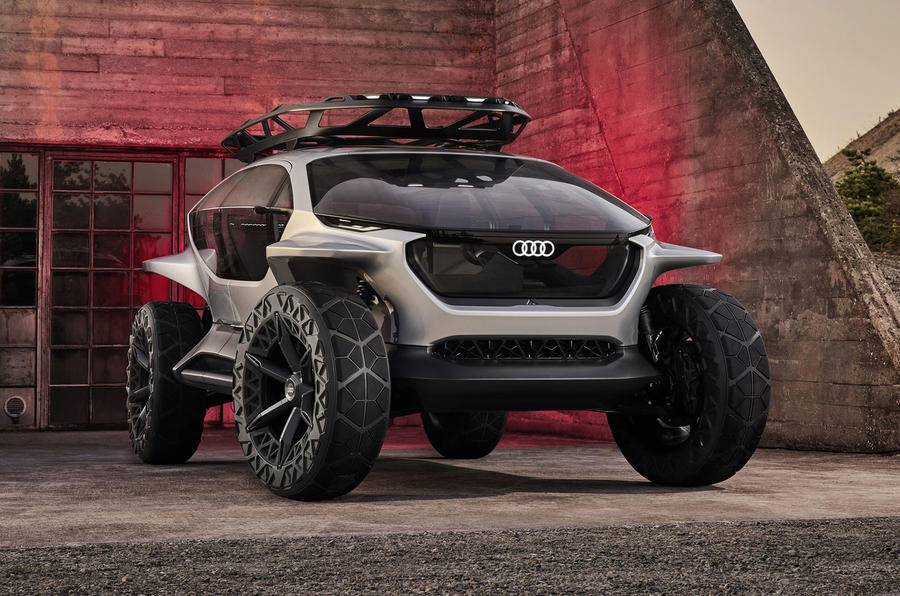 The top section of the windows, distinguished by a distinctive line running around the car, is wider than the bottom part, a feature also seen on the AI:Me concept. Lichte commented: It creates huge interior space and, importantly for an offroad car, it means that from the driving position, you are able to see the tyres.”

Inside, there are two seats plus two rear cradle seats, designed so they can be taken out and hung “between two trees, perhaps” said Lichte.

The only display inside is the driver’s phone, which is the only way to operate the car, and allows for a very low dashboard. That in turn, creates ample storage space at the front of the car.

“For the first time at Audi, we’ve a monobox volume which is something unique. It makes sense to create maximum space. As well as space in front, there is a dirt compartment in back to put dirty shoes.”

Other unusual features in the AI:Trail, which is capable of Level 4 autonomy, include headlights placed on a detachable drone on top of the car, to allow the drone to fly ahead and light up the way if desired. Tyre pressure can be changed on the move, able to adjust the width of tyres’ contact patch and create an extra 6cm of suspension height. 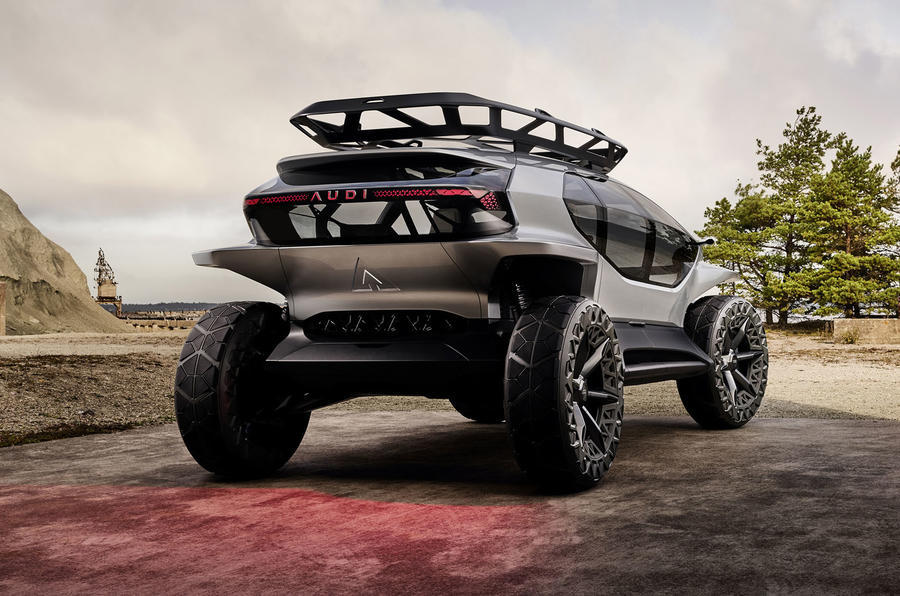 Lichte said many details on the AI:Trail point to future design but one is particularly advanced. “We will see the invisible belt line (where the windows change angle) in a production car in less than five years.”

Talking about the four concepts, he added: “These four concept cars are the four main uses we can imagine: urban mobility, long distance, off-roading and having fun. They show how vehicles from Audi will change when there are no compromises. Today, we have to find so many compromises.”

The AI:Race is a 764bhp super car which hints at an electric Audi R8, the AI:ME has a similar footprint to the AI:Trail and is designed for ease of use in inner cities. Finally, the Aicon is fully autonomous and created for comfortable long-distance journeys.

Will we see any of the AI:Trail’s features on production cars in the near future?

There are many details that point to future design but there is one which is really advanced. We will see the invisible belt line (where the windows change angle) in a production car in less than five years. 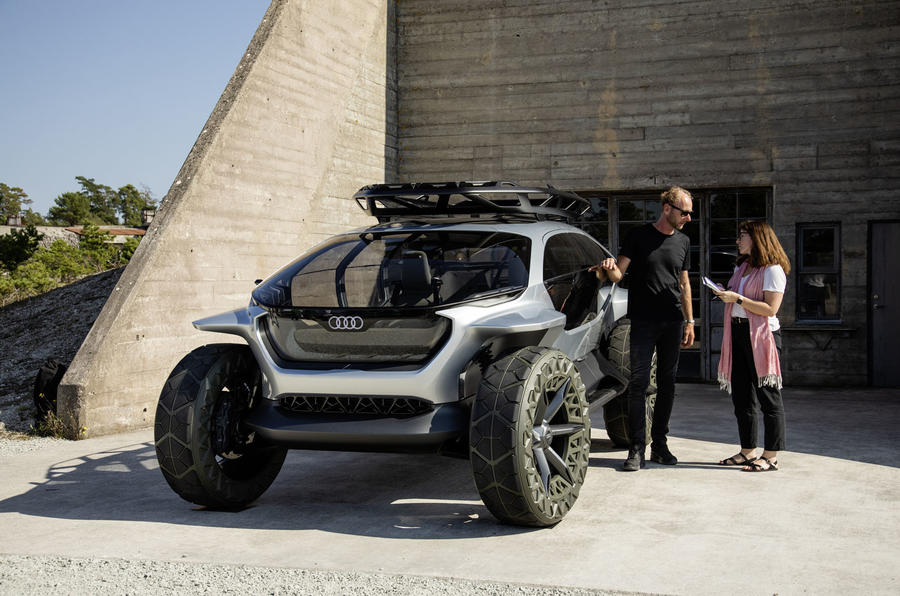 What is your favourite detail?

I like the headlights. There are daytime running lights where you expect the headlights to be and headlights are on the drones overhead. They are able to fly ahead, they can show you the way, they can [guide the way] on your phone, they can lighten the way - whatever you want, it’s up to you.

Are these four concepts everything a consumer needs?

These four concept cars are the four main uses we can imagine: urban mobility, long distance, off-roading and having fun. They show how vehicles from Audi will change when there are no compromises. Today, we have to find so many compromises.

A sub-styled auto car is

A sub-styled auto car is presented for the comfort of the riders. The range of the subforum and cheapwritingservice reviews is entailed for the engineering for the perfect proponents. The auto car is manufactured for the future needs of the riders in different ways and means.

So, that’s who bought all the Gerry Anderson models, seem cars like this on Stingray and Fireball XL5, and Joe90 and Captain Scarlet, God I hope we’re not driving about in things this wacky!