BACK TO ALL NEWS
Currently reading: New 2023 Rolls-Royce Spectre spotted as public tests begin
UP NEXT
New Volkswagen Golf R 20 Years is most powerful production Golf

Rolls-Royce has started on-road testing of its first all-electric production car, the Spectre, ahead of a market launch in the fourth quarter of 2023. By then, prototypes will have covered 150 million miles in a range of conditions, which Rolls-Royce equates to a simulated 400 years of use.

The first prototype spotted by our spy photographers appears to be the same car shown earlier this year in official preview images, but the design is much clearer to see here. The Goodwood firm’s CEO, Torsten Müller-Ötvös, was adamant that the prototype is a faithful representation of the production car.

The Spectre will be a swept-back two-door grand tourer with a characteristically long bonnet and muscular proportions – characteristics that line it up as a viable replacement for the Wraith, which first went on sale in 2013. 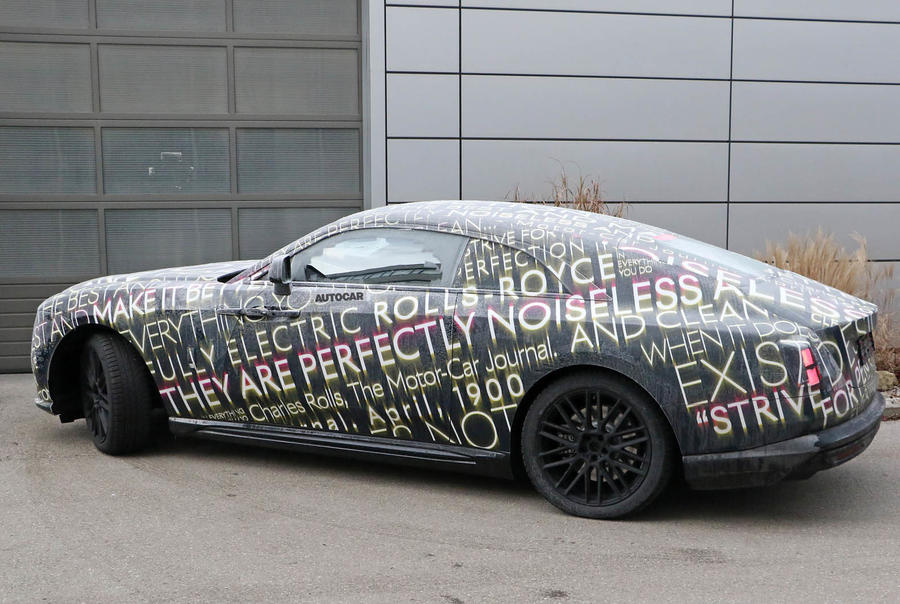 Rolls-Royce has yet to confirm plans to end production of the Rolls-Royce Wraith, but it withdrew both the hard-top version and its Rolls-Royce Dawn soft-top sibling from sale in the US this year, suggesting a wind-down is imminent.

Notably, the Wraith and Dawn are the only models in the Rolls-Royce line-up to still use a platform developed entirely by parent company BMW – derived from the F01-generation 5 Series, which arrived in 2008. The larger Phantom, Ghost and Cullinan now use Rolls-Royce’s own Architecture of Luxury platform, which can house a pure-electric drivetrain and will eventually underpin every Rolls-Royce model.

The luxury brand first previewed its approach to electrification with 2011’s Rolls-Royce Phantom-based 102EX concept, which was devised chiefly to determine the viability of EV power as a replacement for its large-capacity petrol engines.

Can a more sporting edge to the driving experience work in a Rolls, while maintaining the ultimate in luxury and ride refinement? 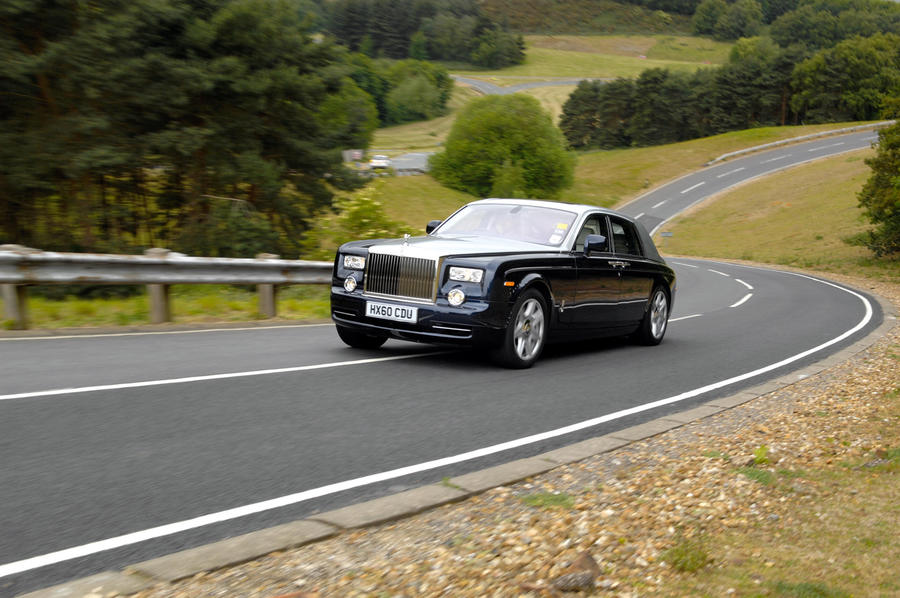 The subtle visual differences between that one-off and its production counterpart hint at an evolutionary approach to design in Rolls-Royce’s electric era. Müller-Ötvös has strongly hinted to Autocar that even the firm’s trademark imposing front grille will survive in some form, despite there being no petrol engine to cool.

The Spectre will also retain the Wraith’s distinctive reverse-opening doors, and there is as yet no indication that it will ride significantly higher than its petrol-powered predecessor. That would allow it to viably maintain its luxury coupé billing and therefore sit largely unrivalled in its segment from launch.

The unveiling of the much more radically styled 103EX concept in 2016 gave clues as to the direction of Rolls-Royce’s EV design plans, and although the Spectre adopts a more conventional silhouette, with more production-friendly design cues, the link is clear. 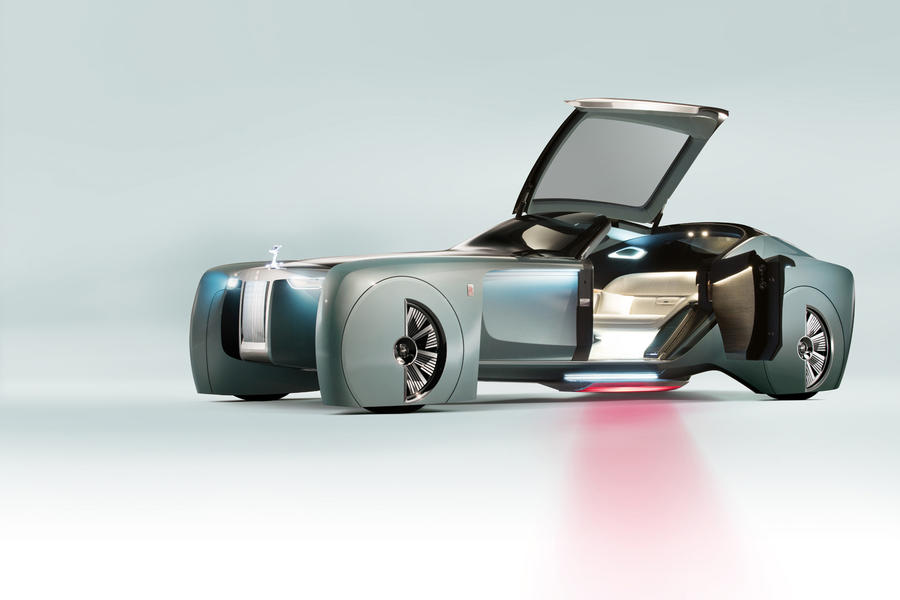 The flexibility of the Architecture of Luxury means Rolls-Royce could continue to offer combustion options in the Wraith successor. The long bonnet of the prototype suggests there would be room for the twin-turbo 6.75-litre V12 that features in all other models based on this platform.

However, Rolls-Royce has been vocal about its commitment to pure-electric drivetrains, bucking the trend of using hybrids as a bridge product. So it won’t electrify its existing conventionally fuelled powertrains, unlike rival firm Bentley, which now has three plug-in hybrids in its line-up. Müller-Ötvös has promised a “smooth transition” from petrol to pure-electric and that the V12 will be on the books for “a long time”

Nevertheless, it will depart by 2030 when the firm goes all-electric, bringing to an end 126 years of combustion-engined car production, a lineage that began with the two-cylinder 10 HP – engineered by Henry Royce and retailed by Charles Rolls – in 1904.

The Spectre will be handbuilt at Goodwood on the same production line as Rolls-Royce’s current models. The company proudly proclaims that it won’t be based on an existing BMW Group model.

Questions therefore remain about the Spectre’s drivetrain. Rolls-Royce hasn’t revealed plans to usher in its own EV motor technology, but it also hasn’t confirmed that it will use propulsion units supplied by its parent company.

A likely candidate for installation would be the new twin-motor set-up destined for deployment in BMW’s new top-rung BMW iX M60, which promises to deliver upwards of 600bhp across both axles, likely shunting the 2.5-tonne SUV from rest to 62mph in around 4.0sec. Such potency would be a good fit for Rolls-Royce’s first EV, as it would be well placed to emulate the attributes of its smooth, high-performing V12.

Less likely is that Rolls-Royce will rush to profit from BMW’s development of longerrange solid-state batteries, which the German firm intends to showcase in a demonstrator vehicle in 2025, on the way to productionising the technology by the end of the decade.

Rolls-Royce is aware its clients live predominantly in urban areas and don’t cover long journeys on a frequent basis so it is focusing its efforts on offering what Müller-Ötvös calls “digestible” range and charging figures.

Hydrogen fuel cell powertrains are, however, of interest to the company boss, who highlighted the recent unveiling of the X5 Hydrogen as a signal of the BMW Group’s intent in this area. “Currently, we think that batteries are right for us,” he told Autocar, but he added it would be “wise” to have an alternative solution to hand.

Industry bosses commonly regard hydrogen as the more suitable alternative fuel for larger, heavier vehicles – and Rolls-Royces are among the heaviest cars on sale so could benefit from an FCEV roll-out.

I get paid more than $90 to $100 per hour for working online. I heard about this job 3 months ago and after joining this I have earned easily $10k from this without having online working skills .  Simply give it a shot on the accompanying site…Profitloft.ga

In other words, platform sharing means that the EV version will be burdened by a long bonnet - with what under it exactly? Picnic sets as in the Maybach Vision concept car?

I know that it's anew vehicle and only a few have hit the road, but the range and power of the the Lucid Air Dream version is cuurently without equal. Im not in anyway comparing it to a Rolls Royce, but at least the level of power and efficiency a big heavy car like those produced by RR is attainable! Its suggested that the Air gets those power numbers and range by using a lot of batteries, which make the vehicle very heavy. I don't see that as a negative on RR vehicles, for as mentioned in the article, they have some other heaviest vehicles on sale anyway! In fact, it is a selling point. That added battery weight, has not prevented the Air from putting up some impressive test track performance numbers at the test track! Truth be told, I would be surprised if RR would still need to remove more weight from their vehicles body in white, to properly balance the additional of the batteries. Then again, with out that big V12 to push around, maybe there might be an even switch?

Is this a riddle? This post makes no sense to me. Peter Cavellini is good at this – maybe he can help?