BACK TO ALL NEWS
Currently reading: New 2022 BMW iX: high-tech SUV priced from £69,905
UP NEXT
Drawing fire: We talk to BMW's design director

BMW’s new electric flagship, the strikingly styled iX SUV, will launch in the UK in November with a choice of two powertrains and pricing starting from £69,905.

The entry-level iX xDrive40 uses the same twin-motor, four-wheel-drive configuration as the xDrive50 range-topper but with power output reduced from 500bhp to 296bhp. It has been priced to match a “comparable” conventionally fuelled BMW X5. A range-topping iX M60 version will be launched later this year.

Both models will be offered in the UK in Sport and M Sport trims. As standard, Sport includes a 12.3in digital instrument display, which links with the 14.9in touchscreen to create a 'curved' display unit, an 18-speaker Harmon/Kardon audio system, 21in wheels and a range of driver assistance systems. 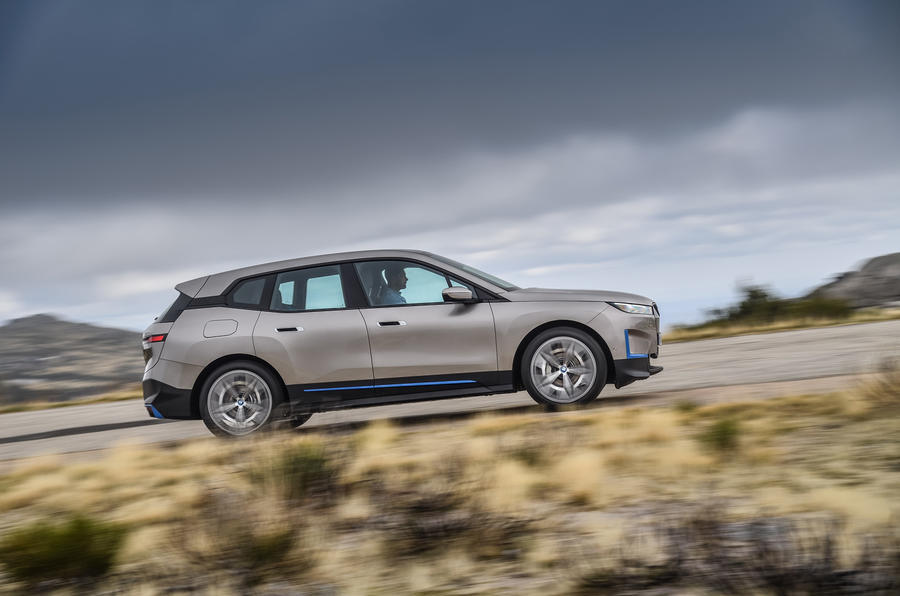 BMW has optimised range by increasing the energy density of the batteries, rather than the size of the units themselves, in an effort to keep weight down. The xDrive40 is capable of charging at speeds of up to 150kW, which, BMW claims, is fast enough to gain more than 56 miles of charge in as little as 10 minutes, whereas the xDrive50 has 200kW charging capability for 75 miles in 10 minutes. Both cars, the company claims, can be charged from 10% to 80% capacity in less than 40 minutes and use less than 21kWh of electricity per 62 miles travelled, on average.

Over the course of 125,000 miles, BMW claims, the iX xDrive40 has a 45%-lower global warming potential than that of a comparable diesel car.

The company is working to improve the sustainability of its supply chain and the increased use of recycled materials for the iX helps to cut production process emissions by 18%.

BMW now also procures the cobalt and lithium used for its EV batteries itself, to ensure that “environmental and sustainability standards are observed”.

jamesc (below) is correct. Wait until much closer to the 2030 cut off before going electric. If you buy now your car will be obsolete in no time and you will have paid far too much to become an early adopter guinea pig. Before long electric cars will have a longer range, be much lighter and more affordable. You never know, BMW may even build a pretty one...

jamesc 3 June 2021
Styling aside, the main issue for me is the really poor range for the 40 and the fact you have to step up to a much faster (ie unnecessary) and pricey car to get a decent range. These will be out of date before you know it - Looking at Audi it shows that such over-inflated, expensive, poor-range launch cars eg eTron are soon overtaken by the next gen (Q4 eTron) which offer more of everything for almost as much internal space.
Harry P 3 June 2021

It may be a technical success, but the styling is simply hideous.