Mercedes-Benz has released images of the upcoming SL roadster undergoing winter testing, ahead of its official reveal later this year.

The reborn convertible, which is set to be unveiled this summer, will square off against the Porsche 911 Cabriolet with a range of hybridised straight-six and V8 engine options.

These latest images show multiple SL variants side by side in minimal disguise, highlighting two different fabric roof options. This confirms Autocar’s previous reports that the SL will arrive with a traditional fabric hood in place of the folding hard-top arrangement that has been used for the past two incarnations.

Mercedes also confirmed that the 2+2-seat SL will be sold under the AMG brand only and will be offered with fully variable 4Matic+ all-wheel drive. While much of the SL's development was handled virtually, final on-road testing will soon include the north loop of the Nürburgring, hinting at the car's sporting ambition. 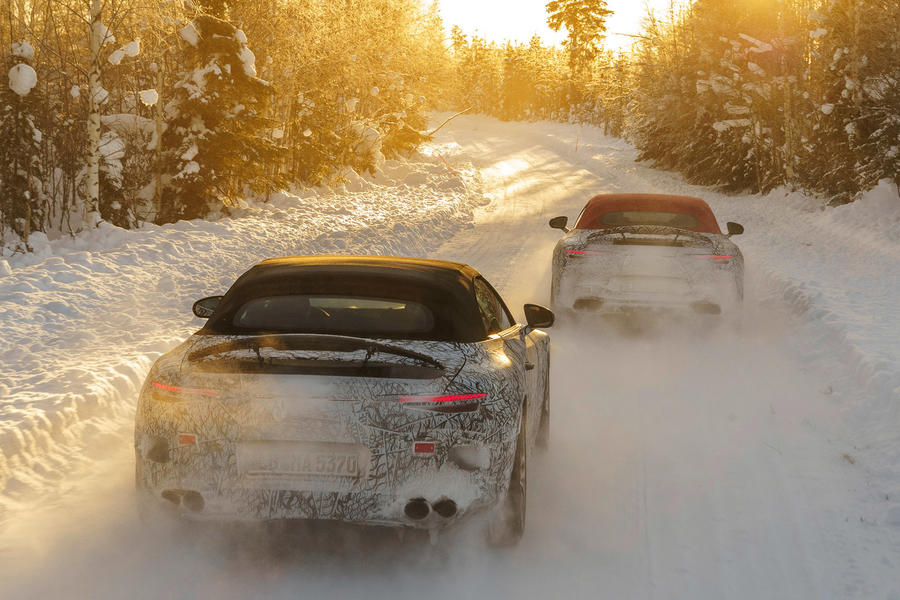 Previous spy images gave clues as to how different model variants will be told apart: prototypes with circular exhaust outlets are believed to be an entry-level hybrid variant - likely the SL 450 EQ Boost - while ones seen with more aggressive-looking pipes and raised rear spoiler are expected to be the top-rung SL 63 AMG.

The prototypes bear a strong resemblance to that which featured in official images released by Mercedes last year. The SL shows a clear family resemblance to the Mercedes-AMG GT, with a rounded rear end, long bonnet and a pair of slim horizontal rear light clusters.

The SL is set to be revived as a lighter, faster and more engaging model partly inspired by the brand’s motorsport roots, which is why overall development duties have been assigned to the AMG performance division. It will be the first time AMG has overseen development of any SL across its previous seven generations.

Last year, then-AMG boss Tobias Moers confirmed that the SL, which will go on sale by 2021, will be “aligned” with the next AMG GT. The duo's shared aluminium-intensive platform, known as the Modular Sports Architecture (MSA), will increase the economies of scale and overall profitability of two of Mercedes’ most exclusive model lines.

“We’re bringing back the historic DNA of the SL," he said. "It's far sportier [this time round]. It will have a perfect compromise between driving dynamics and comfort, because it’s still kind of a cruiser, too.”

He also confirmed that the eighth-generation SL will be offered only as a roadster, like its predecessor. It is expected to go on sale in the UK towards the end of 2021.

Early plans to base a successor to the smaller SLC off the same underpinnings have been abandoned following a recent decision not to replace the junior Mercedes roadster due to dwindling sales.

Early prototypes of the new SL were spied testing on track with the new platform underneath a shortened S-Class Coupé body. They gave away little about the car’s mechanical set-up, which is rumoured to run a transaxle arrangement with a dual-clutch automatic gearbox integrated within the rear axle assembly, like on the GT. However, the overall dimensions of the engineering mules suggest the production version will be slightly larger than the existing SL, which is 4630mm long, 1870mm wide and 1310mm tall.

The adoption of the MSA platform is claimed to have had a positive effect on the styling of the new SL, whose proportions are said to be more in keeping with earlier incarnations of the classic roadster than the current model, which shares a platform with saloon models such as the C-Class, E-Class, CLS and S-Class.

A Mercedes source told Autocar: “The new platform has given us more freedom. There’s more distance between the front axle and the front firewall. This gives it more traditional proportions.”

In a further departure from today’s model, it is also expected that Mercedes will provide the 2021 SL with a 2+2 seating layout. Autocar has been told that AMG is keen to give the new SL the same sort of practicality as the Porsche 911, with a set of rear seats capable of accommodating adults for short journeys or, alternatively, luggage as an extension of its boot.

The range is understood to start with an SL 450 EQ Boost model running a turbocharged 3.0-litre in-line six-cylinder developing around 365bhp, along with an added 22bhp in combination with an integrated starter motor.

Further up will be the SL 53, which will run a more powerful AMG-tuned version of the SL450 EQ Boost’s mild-hybrid drivetrain with around 430bhp and added 22bhp through electric assistance.

Among the V8-powered models will be the SL 500 EQ Boost. It is due to receive a turbocharged 4.0-litre V8 with a similar power output to the SL 53, but significantly more torque. Topping the range will be the SL 63. It is likely to be offered in two states of tune, with the most powerful model running a turbocharged 4.0-litre V8 capable of in excess of 600bhp and more than 30bhp of electric boost. It is unclear if Mercedes will continue with the V12-powered SL, although, given the potential output of the SL 63, it would seem unlikely. 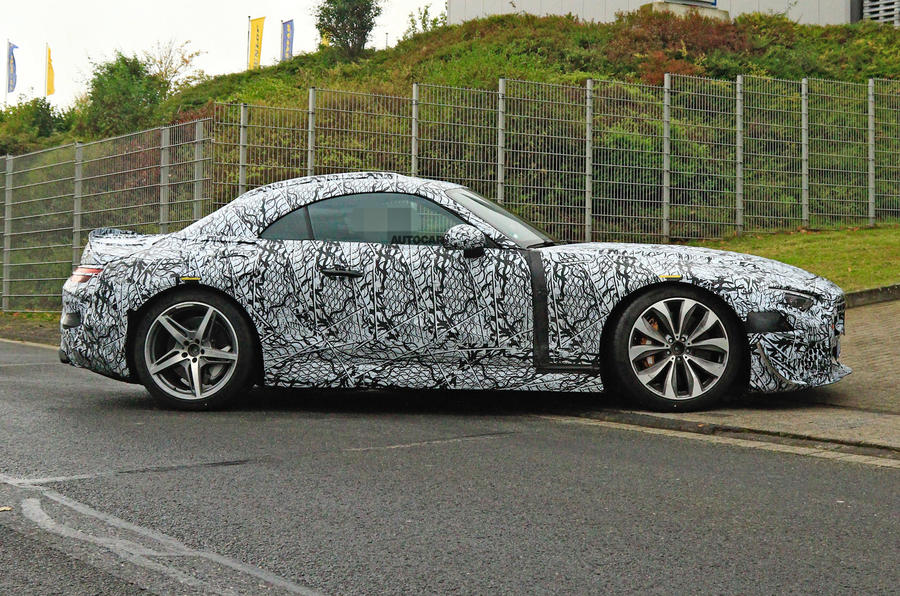 In pictures: the evolution of the iconic Mercedes-Benz SL​

If it has the same squat wide stance with the swollen arches as that rendering, that will be one mean looking car. The new spy shots seem to indicate it wont be far wrong.

Some of the most uninspiring design language

I always give BMW and Audi crap for making cars that are pretty much impossible to distinguish but hey at least they've got the i8, R8, TT, i3 and such.

I don't even think about Mercedes when I make those comments because that's literally how uninspiring their current design language is. It's like there wasn't a single original thought that went into the last 10 years of mercs. Even the AMG GT isn't that exciting to look at and just when you thought it couldn't get any more boring they made a 4 door version for boring people with money and too many children.

I always give BMW and Audi crap for making cars that are pretty much impossible to distinguish but hey at least they've got the i8, R8, TT, i3 and such. I don't even think about Mercedes when I make those comments because that's literally how uninspiring their current design language is. It's like there wasn't a single original thought that went into the last 10 years of mercs. Even the AMG GT isn't that exciting to look at and just when you thought it couldn't get any more boring they made a 4 door version for boring people with money and too many children.

The AMG GT 4dr is vastly better looking than a Panamera or M5 or E63.

So 2 children is too many? Really? Did you miss out on love as a child or something?

The 4 door looks nice and is great to sit in too. Definitely a contendor in the 4 door fast car class with the Panamera.