From £29,0358
Share review
New diesel engine and gearbox make big-selling C-Class as good as any of its rivals objectively, though it’s still a luxurious, laid-back sort
Share
Open gallery
Close

The Mercedes-Benz C220d is the biggest-selling version of Britain’s biggest-selling compact executive saloon, tested here in recently facelifted form, out to show its mettle on British roads. Better pay attention in the office canteen, in which case.

The C-Class’s recent facelift brought with it a number of new engines, all hooked up to nine-speed automatic transmissions – and we’ve already sampled the very newest: a 1.5-litre 48V turbo petrol which powers the new C200. But it’s the upper-middle-range diesel, 192bhp C220d that Mercedes expects to continue to dominate the sales mix. For this car, Mercedes has retired its long-serving and somewhat coarse 2.1-litre four-pot diesel engine and brought in its new-generation 2.0-litre, as seen in the latest E-Class. What a difference it makes.

While there’s still the faintest edge of uncouthness to the engine’s combustion under load compared with the very quietest four-cylinder diesels, the new C220d has just as much apparent torque as its predecessor and feels just as strong when accelerating; is much freer-revving; and will return an indicated 60mpg on a longish journey of mixed roads when moving with the flow of traffic. Having been a bit of a relative weakness for the C-Class for decades, the C220d’s engine is now a real strength.

And yet this is still a C-Class: a luxury compact executive option in among pseudo sport-saloons, catering best to a fairly laid-back driving style. Rush that new nine-speed gearbox and it can hesitate a bit during bursts of kickdown acceleration. Hurry it down less than perfectly smooth roads and the car’s standard ‘agility control comfort’ steel suspension, which does deliver an absorbent ride at mooching speeds, allows the body to jounce and porpoise a little too freely over bigger intrusions to provide great onboard tranquillity. The rear axle can also occasionally seem to stumble a bit over sharper edges.

Perhaps Mercedes is a bit guilty of confusing a soft, under-damped ride for a comfortable one, then. But at least we needn’t criticise this version of the car for not being more athletic – though it’s by no means sloppy-handling – since you can have ‘Sport’ or ‘AMG Line’ trims with increasingly shorter and firmer set-ups if you want better body control. And if it was mine, I would.

This might be the first time we’ve tested any ‘W205’-generation C-Class in bottom-rung ‘SE’ trim – and, in some ways, you might prefer the associated interior treatment you get here to the ones of more expensive trim levels. There’s certainly less shiny aluminium-look decoration around the cabin than you get in a ‘Sport’-spec C-Class, with gloss black plastic replacing the metallic trim we’re used to seeing on the car’s doorcards, steering boss trim, air vent surrounds and speaker grilles. It amounts to a less chintzy ambience than pricier examples of the car have – the car’s new button-rich steering wheel looking markedly less busy in black than in bright chrome.

Perceived quality levels are close to class-leading, practicality is good and even the car’s cheapest infotainment system now measures 10.3in from corner to corner. For those reasons and others, the car doesn’t struggle to pull off a pricing position that floats above many of its rivals. 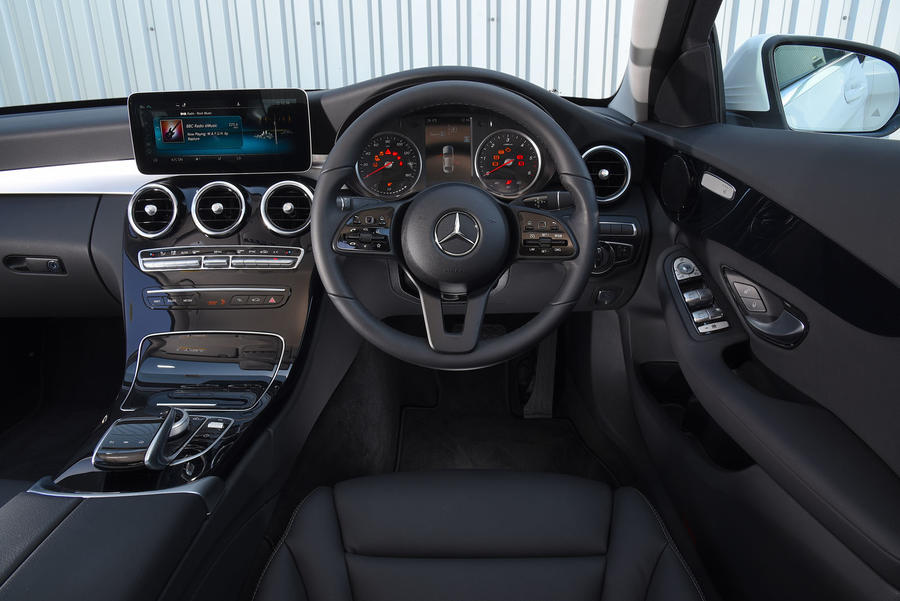 If it suits your particular tastes, yes. A better four-cylinder diesel engine doesn’t transform the C220d into a driver’s car – certainly not in this specification – but most C-Class buyers probably wouldn’t have wanted it to. And nor, quite plainly, need it have done so in order to make this car a commercial success, since it outsold the BMW 3 Series and Audi A4 in Britain even in pre-facelift form.

BMW and Audi may, of course, point to the cannibalisation of sales of their big-hitting compact executive competitors for the C-Class by their own in-house alternatives (4 Series, A5 Sportback). But it doesn’t change the plain truth of the situation: that the C-Class was a class act before Stuttgart’s midlife tweak, and now that it’s appreciably better, it won’t be any easier to unseat.

I have a C Class Sport 250d.
Very fast.very smooth and very quiet. Sublime. The engine is only clakity at low revs but on the move quiet and smooth. Push it it sounds like a sports car. Use Sport+ and it is a rocket. A great and beautiful car.
erly5 10 August 2018

Those wheels are hideous!

I know base spec cars all have the smallest wheels but why do they have to be so ugly. Imo the wheels (size and design) make or break the look of a car and these make the C-Class look dated.

Another monumentally messy dashboard layout from Mercedes. Nothing coherent about it. I don’t think I could live with this day to day, especially compared with Audi or Jaguar.