BACK TO ALL NEWS
Currently reading: New 2021 BMW M5 CS sets records for pace and power
UP NEXT
Ford backs call for European ban on new ICE cars from 2035

The new BMW M5 CS is the most powerful and fastest-accelerating road car that BMW M has ever placed into production.

The ultimate version of the acclaimed super-saloon will join the BMW M2 CS, as well as upcoming CS versions of the latest M3 Competition and M4 Competition, in adopting the range-topping Clubsport tag. BMW describes it as a “specialised performance model combining everyday usability with exceptional track performance”.

Set for UK delivery in April, the M5 CS is priced from £140,780 – £38,455 more than the M5 Competition. However, the M5 CS features a number of upgrades over the existing M5 Competition. These include a more powerful engine, a reprogrammed four-wheel drive system, bespoke chassis tuning and a series of lightweight carbonfibre parts that contribute to a 70kg weight reduction over the M5 Competition.

The M5 CS’s reworked version of the standard M5’s twin-turbocharged 4.4-litre V8 petrol engine produces 626bhp at 6000rpm and 553lb ft of torque between 1800rpm and 5950rpm. This is 9bhp more than and the same torque loading as that offered by the M5 Competition, allowing the headlining M5 model to manage an official 0-62mph time of 3.0sec, 0-124mph in 10.4sec and an electronically limited 189mph top speed.

Although it isn’t a direct rival, the four-wheel-drive Mercedes-AMG E63 S’s twin-turbocharged 4.0-litre V8 petrol engine develops 603bhp and 626lb ft of torque, endowing it with a claimed 0-62mph time of 3.4sec and a governed 155mph top speed. 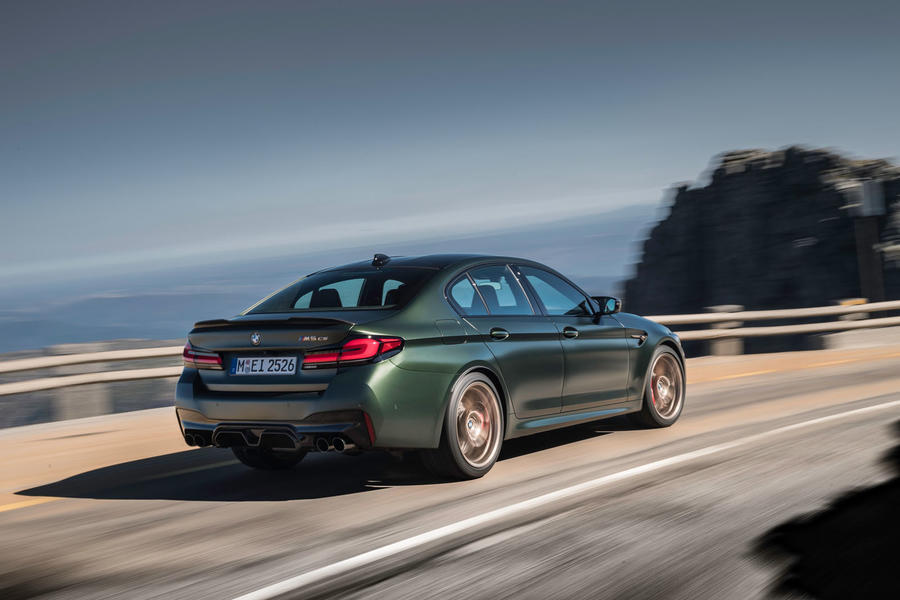 Along with the increased performance, the revised M5 CS engine also gains a redesigned oil pan with an additional sump and indirect charge air cooling. Further changes are focused on the engine mounts, which has a spring rating of 900N per mm for a more rigid mounting and a smoother transmission of power to each wheel, according to BMW’s performance division.

The M5 CS’s chassis is described as being based on that of the M5 Competition but with shock absorbers originally developed for the M8 Gran Coupé Competition that reduce the ride height by 7mm. The new dampers are claimed to reduce the fluctuation in wheel loads. In combination with new spring bearings for the damper control measures front and rear, as well as standard-fit 20in wheels shod with 275/35 front and 285/35 rear Pirelli P Zero Corsa tyres, they are claimed to greatly improve on-the-limit handling.

The increase in performance has resulted in M carbon-ceramic brakes being fitted as standard. They use six-piston fixed calipers at the front and single-piston floating calipers at the rear and are claimed to weigh 23kg less overall than the steel disc system that comes as standard on the M5 Competition.

Additional weight savings for the M5 CS have been achieved through the adoption of a carbonfibre-reinforced plastic (CFRP) bonnet. The car also uses carbonfibre for the front splitter, mirror caps, rear spoiler and diffuser. 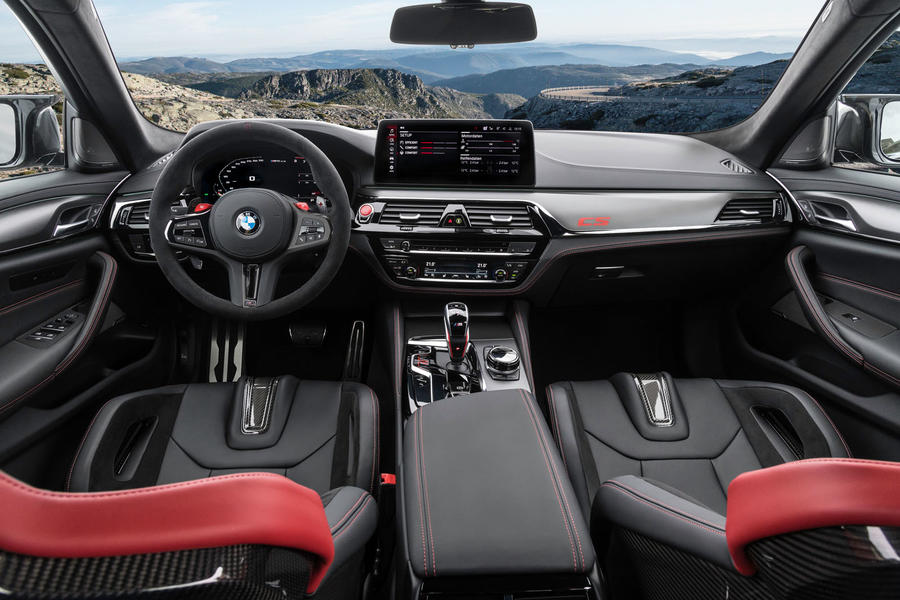 Distinguishing features brought to the new M model include standard Laserlight headlamps with a new graphic and a welcoming light function, a kidney grille surround and air duct feature within the front wings finished in golden bronze, and M5 CS badges at the front and the rear.

Inside, the new car has four individual M carbonfibre bucket seats. Those in the front have integrated headrests imprinted with a map of the Nürburgring, plus electrical adjustment and heating as standard. There’s also an M Alcantara steering wheel with shift paddles made from carbonfibre, Alcantara headlining and a reworked armrest devoid of the stowage box seen on other M5 models.

You can't defy gravity, even with a 70kg weight drop,even with a trick suspension system, you can't hide the feeling of the G' force when you go round a corner at speed or when you stamp hard on the brakes, you feel the weight of the car, Saloons of this size are usually seen charging down Autobahns at Mach2 not going across the Yorkshire Dales, just too big a car for that.

How about making an M5 that's on the heavy side to drive with minimum gadgets and hyudraulic steering. This is a youtube update car to be found on a deserted stretch of road with said presenter engaging launch control. No feedback from the steering but this is meant to be a Competion/CS version. These things are now no more to me than low rise SUVs;

ok so its quick and powerful but it should be at that price. whos going to buy one?

ok so its quick and powerful but it should be at that price. whos going to buy one?

Erm, the people who can afford it, to an extent, it doesn't matter how much or what the car is capable of, if you can afford it, if it puts a smile on your face every time you drive it, then that's just fine, what would you buy if you had the funds to spend a six figure sum on your own personal transport?