BACK TO ALL NEWS
Currently reading: 2021 BMW M5 gets fresh look and new technology
UP NEXT
Alfa Romeo to show new sports car in early 2023

BMW’s M5 performance saloon has been updated to bring it into line with the recently facelifted BMW 5 Series. The Mercedes-AMG E63 rival receives a number of revisions, including tweaked styling, new in-car technology and a retuned chassis.

The exterior changes for the BMW M5 are mostly focused on the front end, where a new double-bar grille design features alongside a reprofiled bumper with new air intakes. The headlights have also been redesigned, bringing new L-shaped LED tubes and incorporating BMW’s Dynamic Laser Matrix Beam for extra brightness on full beam.

At the rear, there’s a new apron and diffuser design, alongside fresh 3D LED taillights and a new tailpipe shape.

The updated M5 is covered in new black detailing, including on the grille and intake mesh, bootlid spoiler, mirror caps, tailpipes and rear apron. Five new paint finishes and a new 20in wheel design also feature. 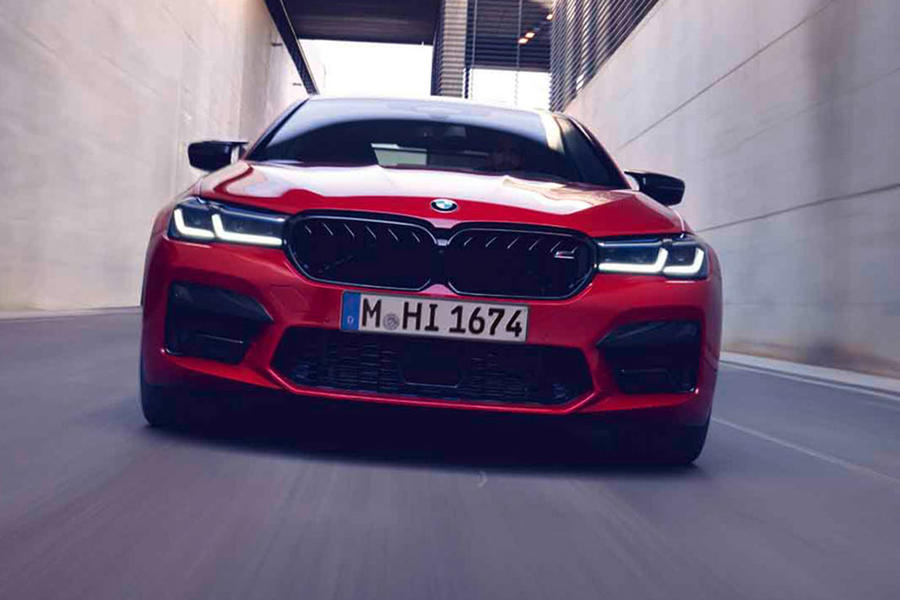 The changes to the cabin reflect those in the standard 5 Series and include a larger 12.3in infotainment display running the latest, seventh-generation iDrive system. Efforts have been made to improve ergonomics, with two new buttons on the centre console taken from the BMW BMW M8.

One allows the driver to switch quickly from Road mode, wherein all the safety systems are operational, to Track mode, which disables all bar the collision warning and Evasion Assistant. It even stops the hazard lights from coming on under hard braking. The other button quickly takes you to individual configuration modes for the engine, chassis and standard eight-speed automatic ’box.

Although there were suggestions that more power would be extracted from the M5’s 4.4-litre twin-turbocharged V8, there are the same two powertrain options as before. The standard M5 (which isn’t offered in the UK) produces 592bhp, while the M5 Competition gets 616bhp.

Performance is identical, with the M5 Competition able to sprint from 0-62mph in 3.3sec and onto a top speed of 189mph when the optional M Driver’s Package is specified.

The M5 Competition has received chassis revisions, however, in the form of new shock absorbers from the M8 Gran Coupé. These are claimed to improve comfort by reducing body movements over bumps and ruts. The M Compound brakes are unchanged, but new colour options for the calipers are now available.

The updated BMW M5 Competition is priced from £98,095 in the UK, which is actually £40 less than the quoted on-the-road price of today’s model. Deliveries are expected to start in the third quarter of 2020.

I have the current F90 M5 Comp, it's a great car to drive fast or slow, I would have liked a bit more of an upgrade, and the price is way too much, heavy discounts needed to sell them.

That's two words, two words that tell you what this and others like it give you, if you want to just get from A to B the most efficient way, then buy something like that, nothing wrong with that, but don't condemn others if now and again they get the need for speed, it's my old adage again ....my money my choice.

It doesn't look any different

It doesn't look any different to the current version to me.

Disappointed it isn't a bit more radical but that's BMW for you.