New 2020 Kia Sorento to be revealed next month, report says

Korean media reports suggest Kia's largest SUV will be shown at a dedicated event on 17 February, with a plug-in hybrid variant on the cards
Close

Kia will move its oldest model, the Sorento, into a new generation this year, and now reports from the company's home market suggest it will be revealed in a few weeks' time.

A report from The Korean Car Blog states strongly that the reveal, set to take place in South Korea, is planned for 17 February. This is also the date that domestic-market order books will open for the new car, the publication claims.

It could mean that the Sorento's European premiere would be the Geneva motor show in early March, although Autocar is awaiting confirmation of this from Kia UK.

The new large SUV, which will rival the Skoda Kodiaq, Land Rover Discovery Sport and Nissan X-Trail, shares much of its platform, mechanicals and technology with the latest Hyundai Santa Fe.

Recent spy shots revealed that it has a more square-edged design than its curvy predecessor, with the brand’s tiger nose grille visible within a new front-end profile. Kia also appears to be benchmarking the new SUV alongside the pricier BMW X5, showing the Korean firm's ambition for the model. 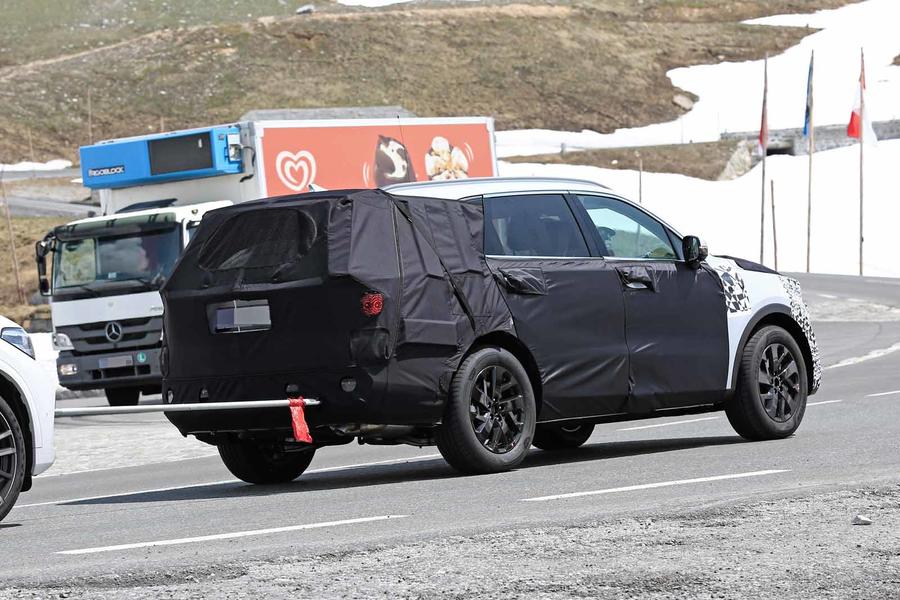 The latest Santa Fe is actually slightly smaller than today’s Sorento, at 4.77m long and 1.89m wide. Whether Kia has slightly shortened the Sorento or extended the existing platform to suit remains to be seen. Either way, it should remain one of the more spacious seven-seat SUVs.

The new Sorento is expected to initially use a 2.2-litre diesel engine mated to an eight-speed automatic gearbox and, on higher-end models, four-wheel drive. But Kia has confirmed that, as part of its electrification plans, there will be a plug-in hybrid version in due course.

That will make use of a four-cylinder petrol engine – likely a turbocharged version of the Kia Niro's 1.6-litre unit – and an electric motor mounted on the rear axle to give electric all-wheel drive.

If recent Kia models are anything to go by