From £25,4958
Share review
Practical Leon ST gains 4WD, and nearly 300bhp. Is this the car that should have launched the Cupra brand?
Share
Open gallery
Close

This is not, I repeat not, a Cupra Leon R ST. Never mind the aggressive styling, quad tailpipes or shouty alloys - just ignore all of that. What this grey and copper-coated thug of a fast estate is, is a Seat: the Seat Leon Cupra R ST, to be exact, and only 150 of them are coming to the UK.

It seems a bit of a backwards step in terms of naming strategy, doesn’t it? Especially when you remember how militant Martorell was in its insistence that the Cupra Ateca was, you know, a Cupra and definitely not a Seat. Establishing a dedicated performance arm and then not naming your latest - and potentially most appealing - performance machine accordingly seems odd to me, but I’m no branding whizz. Seat says that as this generation of Leon was Cupra-ised before the sub-brand split, it will continue to call it a Seat until the next-generation Leon comes along. So it’ll be 2020 before we see a genuine Cupra Leon, then.

In the meantime, Seat Leon Cupra R ST will have to do. And, head-scratcher of a naming strategy aside, it bears all the hallmarks of a proper road weapon. As with the Leon Cupra R hatchback, the Volkswagen Group’s ubiquitous EA888 engine sits at its nose, where it develops 296bhp and 295lb ft. But while the hatch is a front-driven manual, the estate’s power is distributed to all four wheels via a seven-speed DSG.

Such a set-up will no doubt be familiar (think Audi SQ2, Volkswagen Golf R et al), but here it carries a bit more significance: Seat claims this is its first car capable of hitting 62mph from a standstill in less than five seconds. Admittedly, 4.9sec is only a touch below that mark, but the novelty of being able to do it in a practical wagon with a 482-litre boot and enough room in the back for two taller adults will take some time to wear thin.Elsewhere, the Leon Cupra R ST gets new suspension uprights to increase negative camber at both axles to two degrees; adaptive dampers for even tighter body control; 340mm Brembo front brakes; super-sticky Michelin Pilot Sport Cup 2 tyres; and an Alcantara-clad interior. How very sporty. 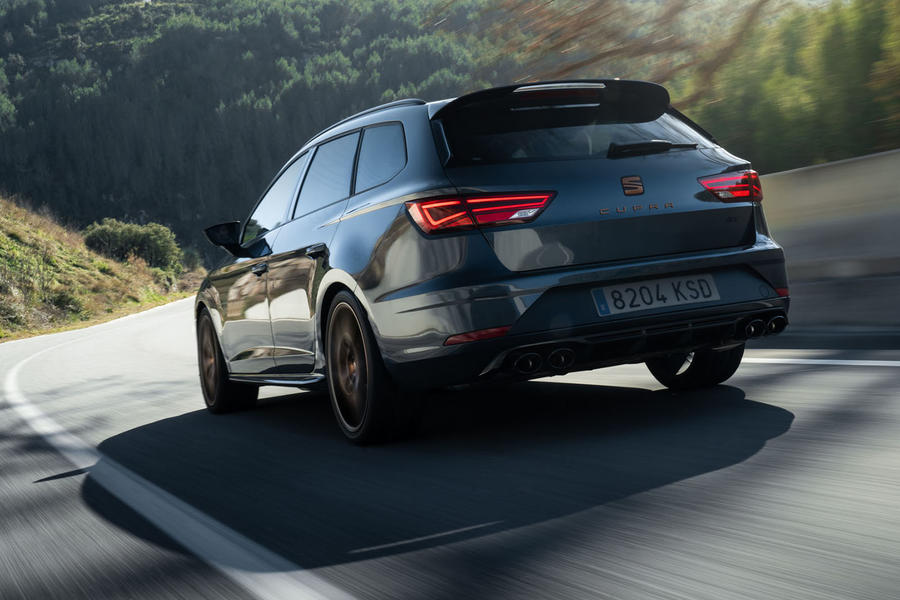 On the closed section of Spanish mountain road that made up part of our test route, the Leon felt every bit as potent as its hardware suggests it should. With launch control engaged, acceleration off the line is certainly intense; but it was the car’s massive traction that impressed most. There’s no mucking about whatsoever; no discernable wheelspin, no hesitation from the transmission, nothing. You simply come off the brake, it squats down on its haunches and then proceeds to attack whatever road happens to be directly in front of that rather gratuitous front splitter.

As the motor’s torque is spread from 2000rpm all the way up to 5200rpm, it continues to accelerate even when the rev counter starts to get within teasing distance of the redline. As impressive as this EA888 engine’s flexibility is, though, there’s little aural pleasure to be derived here. Crackles, pops and bangs on the overrun are enjoyable enough but, with the powertrain set to ‘Cupra’ mode, the engine’s muscular timbre can become a touch nasal.

The seven-speed DSG ’box works well, if not well enough to be an actively endearing aspect of the Seat’s construction. Upshifts are delivered in a snappy but smooth manner that doesn’t deliver a kick to the spine. Downshifts are pretty timely, too; but it’s difficult to shake the feeling that a six-speed manual wouldn’t go amiss here - if only for the greater level of control one would bring.

The grip the Seat displayed off the line is present through faster bends, too. It leaves you feeling as though you could send it into just about any bend at speed and still come out in shape on the other side, such is the tenacity with which it clings to the road. Those heavily bolstered Alcantara seats make sure you can keep a hold of the wheel, too. Of course, absolute lunacy will see you come a cropper, but the limits of this car’s grip feel as though they’re immensely high.

That additional negative camber lends the Leon Cupra R ST an almost aggressively pointy front end. Add even a small degree of lock on to the weighty, Alcantara-rimmed steering wheel and you’ll not only be met with near immediate response, but also a surprising amount of tactile feedback. Body roll is tightly contained, too - even with the dampers in Comfort mode. For all of its family-friendly underpinnings, this is a sensationally incisive car. I don’t think a Volkswagen Golf R Estate offers quite the same levels of dynamic zeal.

What the VW might offer, though, is a ride that’d be easier to live with. This is only a suspicion at this point, mind, as the Seat actually rode with impressive levels of composure out in Spain given its hardcore underpinnings. Even Cupra mode didn’t see it lose too much in the way of polish. But the roads near Barcelona are gloriously smooth, something that can’t be said of our own Tarmac here in Britain. So as to its outright ride comfort, we’ll have to wait and see. 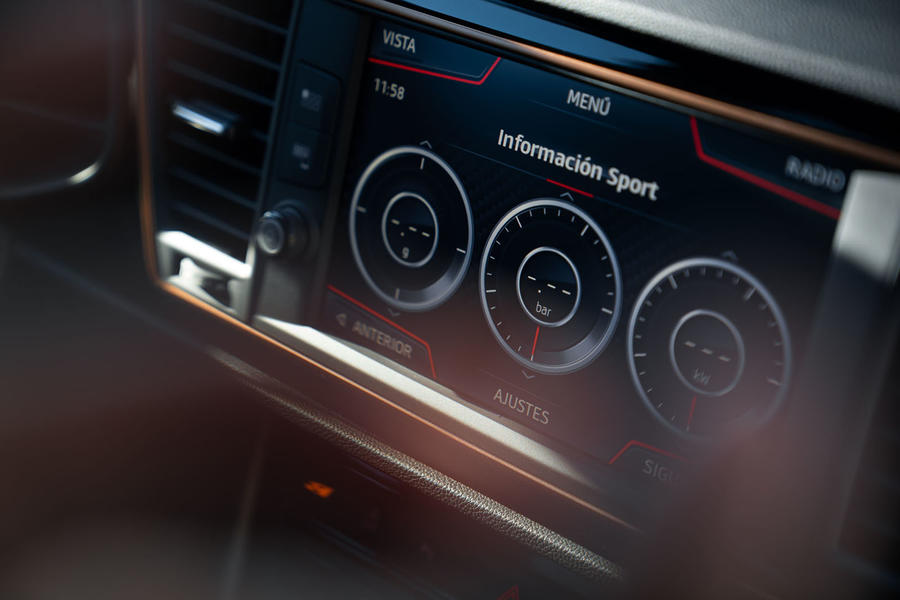 As a sort of sub-Audi RS4 or Mercedes-AMG C63 fast family estate car, I think you’d really rather like the Seat Leon Cupra R ST. It’s devilishly fun to drive on a stretch of twisty blacktop; quick without being unexploitable on the public road; has a cabin that’s appealing enough from a material point of view; and also comes with that properly impressive boot.

The only thing I can see being an issue (other than the fact that only 150 are coming to the UK) is the price. It’s £37,975, and some might baulk at the idea of forking out nearly £40,000 for a Seat - even if it is a riotously fun one to drive. The looks may not prove popular, either; those copper accents are rather, well, strong on the eyes.

But the fact remains that it’s rather wicked to drive – a sharper, more focused and exciting prospect than a Golf R Estate, I reckon. It may also be a shade more difficult to live with in the UK, but we’ll have to wait awhile to assess that.

Those who aren’t turned off by the idea of a limited-run Seat with a price tag this steep will find plenty to get excited about here, though. And if you fancy it, Seat will offer an aftermarket tuning kit from ABT, too; one that lifts power to 365bhp, all for £500. How very tempting that would be. 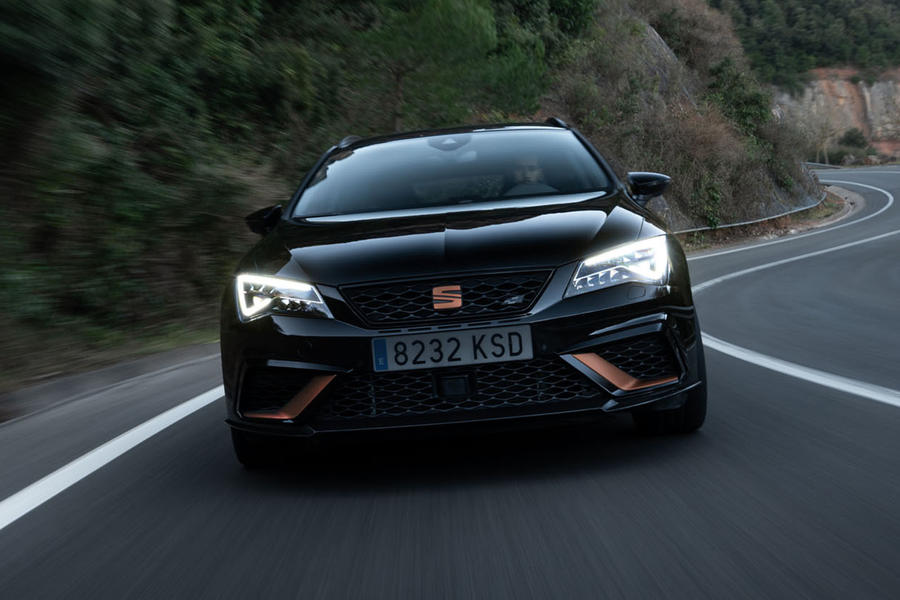 This, or the Golf R Estate?

This Cupra R (or whatever it’s called) drives better and looks a million dollars vs the ungainly and dare I say ugly Golf in estate form. In my most humble opinion of course.....

I bought a special universal scanner for this car http://mobeldeco.com/kupit-avtoskaner-besprovodnoj-elm327-bluetooth-v15-p1502.html, increased power by 30%, with a slight increase in fuel consumption

I bought a special universal scanner for this car http://mobeldeco.com/kupit-avtoskaner-besprovodnoj-elm327-bluetooth-v15-p1502.html, increased power by 30%, with a slight increase in fuel consumption