BACK TO ALL NEWS
Currently reading: New 2019 Porsche Macan Turbo touches down in Frankfurt
UP NEXT
Hyundai launches new Ioniq sub-brand for electric models

The flagship Turbo model of Porsche's revised Macan range has made its public debut at the Frankfurt motor show.

Sitting above the mid-range Macan S, the Turbo commands a price premium of nearly £20,000 at £68,530, and is available to order now. For that you get significantly more power: 434bhp, to be precise, which is nearly ten percent more than the pre-facelift Macan Turbo.

The power boost comes courtesy of a new 2.9-litre twin-turbo V6, replacing the old 3.6-litre unit. It’s the same engine found in the latest Cayenne and Panamera, with developments such as turbochargers mounted inside the ‘V’ of the cylinders and an integrated exhaust manifold. Both permit sharper turbo and throttle response, according to Porsche, along with improved efficiency.

Torque is rated at 405lb ft, put through a seven-speed PDK dual-clutch ‘box and all-wheel drive. Porsche quotes a 0-62mph time of 4.3sec - three tenths faster than the old Turbo - and a top speed of 167mph. Fuel economy is quoted at between 23.5 and 24.8mpg under the WLTP testing regime. 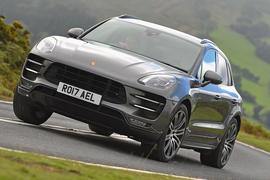 The hot version of Porsche's small, sporty SUV, and its dynamics mirror the Cayman more than being a junior version of the Cayenne. But does that poise translate to the Macan Turbo being the best of the driver-focused SUV bunch?

Braking system with ceramic coated brake discs (tungsten-carbide). For improved response, fading stability and a significant reduction in brake dust formation. Another advantage is the corrosion resistance of the brake discs, even during prolonged periods of disuse. The brake calipers are painted white, lending the brake a unique look.

So for less brake dust and stopping them going red/brown from rust you can pay £2100 !

I bet  the improved response is hardly noticiable.  Looking forward to the first review to see if that is the case or not.