BACK TO ALL NEWS
Currently reading: Morgan 3 Wheeler P101 Edition revealed as run-out model
UP NEXT
Analysis: Why the decline in diesel sales has slowed in 2022

Morgan has launched a limited-edition 3 Wheeler, called the P101 Edition, to mark the end of the car’s production in 2021.

Just 33 P101 Edition models will be made and they have already been allocated to buyers across the UK, mainland Europe and the US. Only 14 P101s will remain in the UK.

Taking its name from the revived 3 Wheeler’s original internal name, Project 101, the P101 is distinguished from the standard car by several bespoke elements, which, Morgan says, are “inspired by the prominent design features of Morgan’s three-wheeled models.”

On the outside, the P101 sports a gold-coloured composite resin cover from Morgan’s 2016 EV3 Concept and low-drag aero-disc wheels. Hella 9in spotlights also feature and are positioned to reduce turbulence around the suspension and wishbones.

The P101 comes in either black or white-silver paint. However, buyers looking for increased customisation can opt for one of four graphic packs.

The Belly Tank pack is inspired by the liveries of belly tank racers and ‘lakesters’ that inspired the original Morgan 3 Wheeler. Morgan says the Dazzleship is the “boldest” of the packs, featuring a white and black military-themed design. 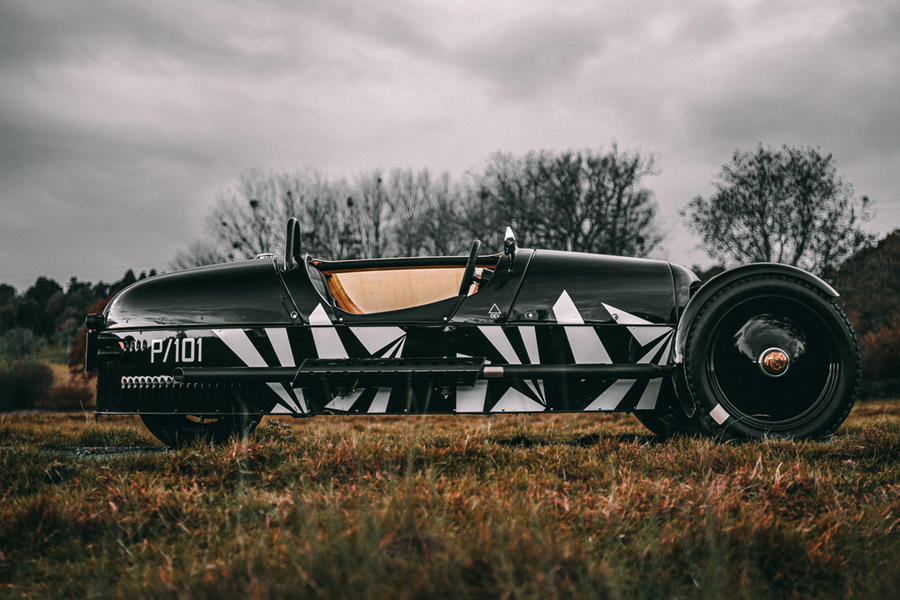 Customers can also choose the Aviator pack, which is inspired by World War Two RAF planes, or the Race Car pack, featuring stripes and roundels that pay homage to the liveries of early Morgan race cars.

The P101 retains the S&S 1998cc vee-twin engine found on the standard 3 Wheeler, which generates 82bhp at 5250rpm and allows the sports car to cover 0-62mph in 6.0sec. It’s this engine that is causing the pause in 3 Wheeler production, as type approval on it ceases in 2021.

Disappointed fans needn’t give up hope, though, as Morgan has confirmed that a 3 Wheeler model will return in the future.

“Production of the most recent 3 Wheeler has been a thrilling and exciting chapter in Morgan’s history,” Morgan boss Steve Morris said. “The introduction of the ‘current’ 3 Wheeler in 2011 proved to Morgan, and the world, that fun cars still have a place and that the ‘why not’ attitude is sometimes best.”

Morgan says the P101 Edition models will enter production “immediately” and continue alongside ‘bespoke’ 3 Wheelers during 2021.

Never mind that you can buy a "better" car for £54K, the fact that you can, if you choose to do so, buy this one is a cause to celebrate. Quirky, unique and the perfect antidote to the herd mentality.

Never mind that you can buy a "better" car for £54K, the fact that you can, if you choose to do so, buy this one is a cause to celebrate. Quirky, unique and the perfect antidote to the herd mentality.