The Mercedes-Benz Concept EQT previews the brand’s new T-Class MPV, the electric version of which will be the ninth model from its EQ sub-brand.

Based on the upcoming second-generation Citan light commercial vehicle (LCV), the concept showcases Mercedes’ plans for an LCV-derived MPV offered with petrol, diesel and pure-electric drivetrains. Combustion variants will be sold as the T-Class, while the EV will take the EQT name into production.

"We are expanding our portfolio with the T-Class. It will appeal to families and private customers who enjoy leisure activities and need a lot of space and maximum variability. And as the Concept EQT shows: we will also be offering a fully electric model in this segment in the future," says Marcus Breitschwerdt, head of Mercedes-Benz Vans.

Set to rival the Volkswagen Caddy, Citroen Berlingo and Vauxhall Combo when UK sales get underway in 2022, the new model has been developed in partnership with Renault; the T-Class is twinned with the third-generation Kangoo, while the EQT is a sister model to the recently announced Kangoo E-Tech Electric. 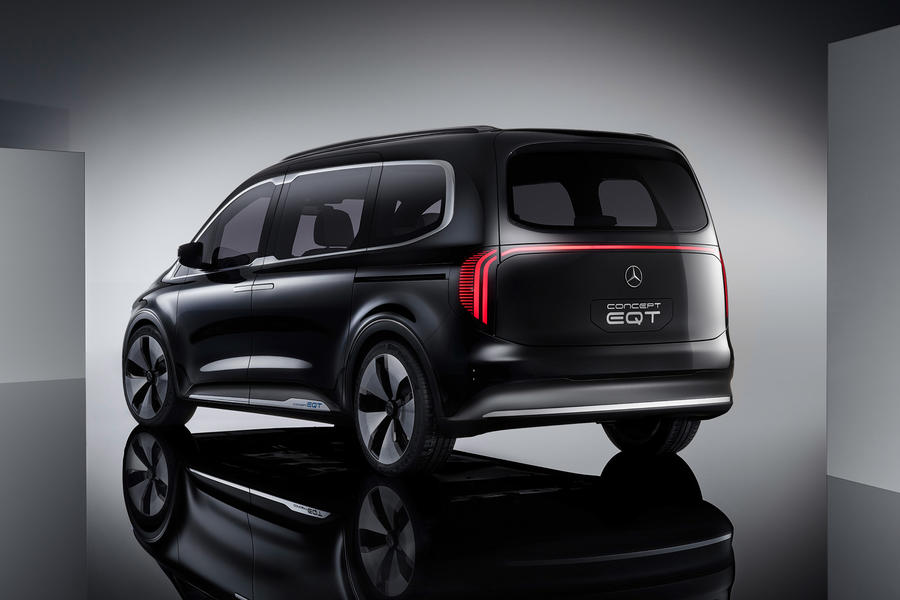 The Concept EQT previews the styling of the new Mercedes-Benz MPV with production-bound cues including a prominent black panel grille featuring a 3D star effect and slim LED headlamps up front as well as a full-width rear light bar. Concept car flourishes include large wheelhouses, 21-inch wheels shod with low profile 235/45 R21 tyres, an expansive panoramic glass roof and a leather-lined interior featuring an integrated skateboard carrier at the rear.

The production versions of the T-Class and EQT will be unveiled later this year, with toned-down design features but offering overall packaging and accommodation largely unchanged from the concept.

Full details will be revealed closer to its arrival, though the latest offering from Mercedes-Benz’s Van division is planned to offer the choice of either a standard wheelbase in combination with a five-seat layout or, as previewed by the Concept EQT, an extended wheelbase with a seven-seat layout.

Underpinning the two models will be Renault’s CMF-B platform, which supports both combustion and electric powertrains.

At 4945mm in length, 1863mm in width and 1826mm in height, the Concept EQT is 92mm longer, 8mm wider and 8mm higher than the Volkswagen Caddy Maxi. Entry to the front is via front-hinged doors, while rear access is via a set of sliding doors, electronically operated on the concept but set to be manual on the production version. A large tailgate opens at bumper level to reveal a flat luggage compartment, which can be extended by removing the rear-most seats and folding the second row. 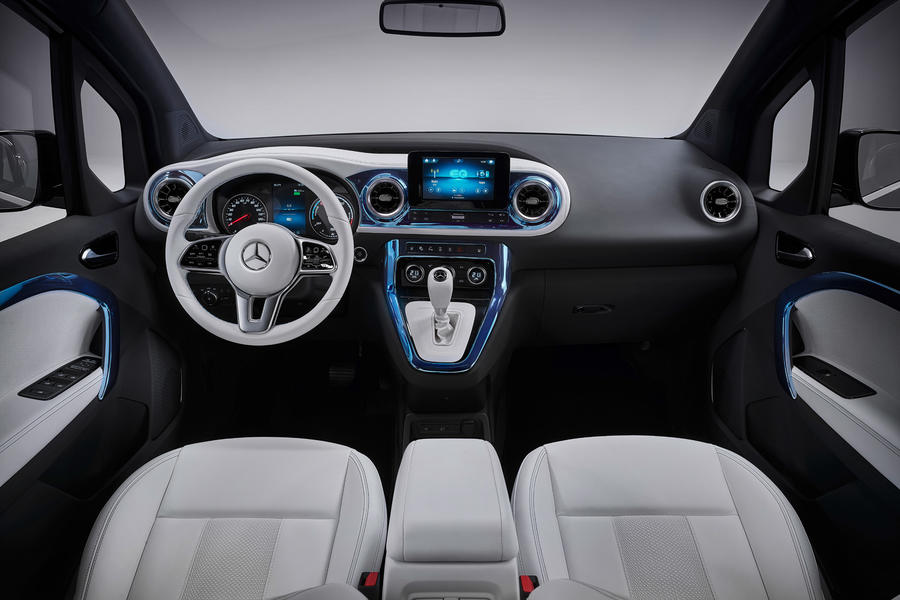 The long wheelbase and tall stature of the new MPV model helps to maximise interior space in the first two rows, and allows for a wide variety of storage spaces throughout the cabin. The second seat row is designed to accommodate up to three child seats. Fold away plastic tables, meanwhile, are integrated into the backs of the front seats.

While the white Nappa leather of the concept car will make way for harder-wearing nylon fabric upholstery on the production versions, the design of the dashboard and its controls, including the centre touchscreen display, will be retained.

Among the standard features will be the same MBUX operating system as that used by the A-Class and other new Mercedes-Benz models. Safety functions will include automatic emergency braking, lane assist, cross wind assist, trailer stability control and adaptive cruise control with a traffic assist feature.

Mercedes-Benz’s aim with the Citan-based T-Class is to emulate the sales success of the larger Vito and V-class. The brand claims it will offer premium levels of connectivity and quality in a market segment traditionally associated with affordable pricing and everyday versatility.

Drivetrains are as yet unconfirmed, but will likely mirror the diesel and petrol options offered by the Kangoo, in combination with either a standard six-speed manual or optional seven-speed dual-clutch automatic gearbox. Included is a turbocharged 1.2-litre petrol unit developing 113bhp as well as a 1.5-litre diesel offered with a range of outputs from 74bhp-109bhp. 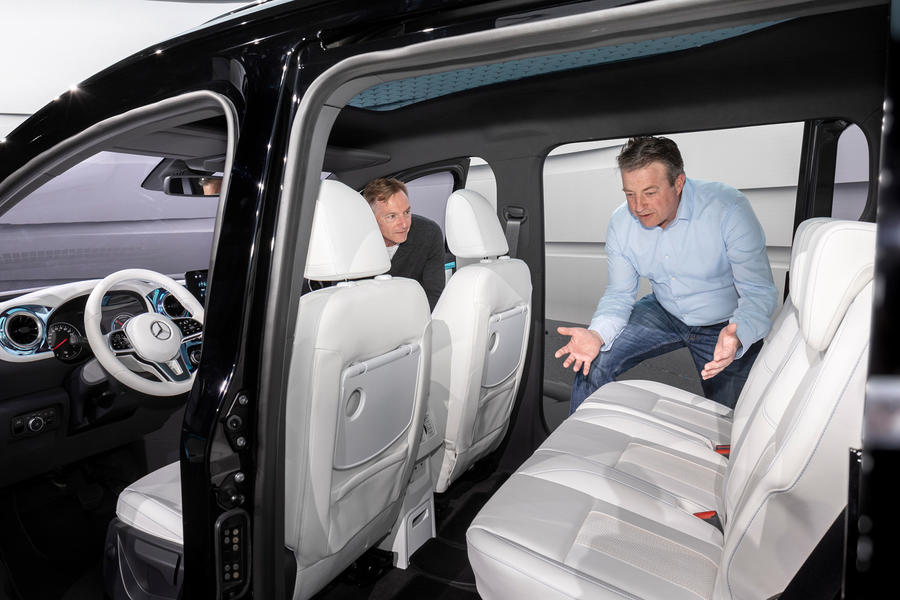 The EQT, meanwhile, is in line to receive a 101bhp electric motor in combination with a 45kWh battery. In the Kangoo E-Tech Electric, this combination offers a claimed range of around 165 miles.

The EQT will be the ninth Mercedes-Benz model to be sold under the German car maker’s EQ electric vehicle sub-brand, following the EQC, EQV, EQA, EQS and EQB as well as the yet to be revealed but officially confirmed EQE, EQE SUV and EQS SUV.

The T-Class and EQT are planned to be produced alongside the Renault Kangoo and Kangoo E-Tech Electric at the French car maker’s MCA factory in Maubeuge, France.

Log in or register to post comments
Commenter 11 May 2021
Good to see the old but best looking version of espace mpv is back, still with renault underpinnings but with Mercedes badges. Sharing tech is probably the only way this potentially low volume people mover if sales are dismal could be approved for production.
whalley 10 May 2021

I'm confused. This thing looks huge, the spec says it is 5m long and yet it will get by with a 101bhp motor and a 45kwh battery? This is hybrid spec for new cars of this size and relative luxury.

Daimler/Mercedes Benz really need to understand that there is no "magic of Mercedes" from essentially badge engineering especially with manufactures who are "mainstream"  ! Look at the fiasco with a badge engineered Nissan Navara ! Also Maybach simply cannot compete with Bentley or Rolls Royce with a stretched S Class with trinkets.  They will never learn until they look back at the success of the 600 which was a wholly dedicated design.

And who wants an A Class with a Renault engine ?