The original Citan was Mercedes-Benz’s first attempt at a practical light commercial vehicle (LCV) in a market segment that continues to show solid growth in the UK.

Conceived to challenge the likes of the Volkswagen Caddy, Citroën Berlingo, Peugeot Partner and Vauxhall Combo among others, it was introduced in 2012 in a wide range of configurations with the choice of three wheelbases and a multitude of seating layouts aimed at making it emulate the success of the larger Vito.

A product of the engineering alliance between Mercedes and Renault, it was based heavily on the latter’s strong-selling Mk2 Kangoo, which also gave it strong ties to the Dacia Dokker and Nissan NV200.

But after suffering the indignity of failing to score a five-star safety rating for Europe (something that Stuttgart had sternly promised), the Citan got off to a slow start. Despite heavy discounting throughout its nine-year model cycle, sales never came close to the expectations heaped upon it at its launch.

This Mk2 Citan couldn’t be any different, says Mercedes. It has once again been engineered in partnership with Renault and shares it mechanical base and drivelines with the new Mk3 Kangoo.

“The important thing is that it has been co-developed from the outset as a Mercedes-Benz model, rather than being adapted from an existing design,” says Citan project head Dirk Hipp. “This has given us greater scope to provide it with the necessary styling, dynamic qualities and features that we think will be crucial to its success.” 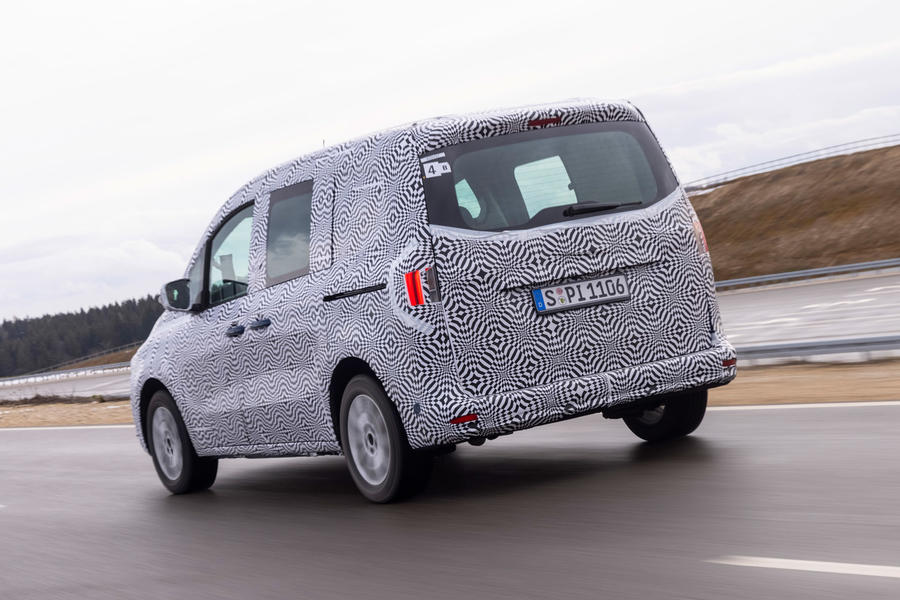 Reflecting the new approach, Mercedes has decided to split the line-up in two; commercial vehicle variants retain the Citan name, but the more extensively equipped, leisure-orientated passenger versions of the new model will now be sold under the T-Class name.

Mercedes' first-ever compact van is the sister of the Renault Kangoo, but the Citan offers considerable brand appeal

Before the two new models are launched later this year, we’ve been given the chance to drive a prototype of the new Citan during validation testing in and around the company’s Immendingen research-and-development facility in Germany.

Our drive comes near the end of a two-year development program for the new Citan. On top of early computation modelling and simulations, it has taken in more than 500 individual tests across Europe in temperatures ranging from -25deg C to 40deg C.

As is characteristic in this class of car, the Citan receives a van-like tall, two-box profile aimed at providing it with maximum interior space, simplistic functionality and the sort of everyday practicality that's demanded by customers that shop in this sector of the market.

We’ll have to wait until the disguise is dropped before we get a good look at the styling, but Mercedes says it has attempted to provide the new Citan with far greater visual differentiation to the Kangoo than with the first-generation model. There does, however, appear to be some clear similarities within the exterior of the two new models, most notably the angled base of the rear side windows.

In a consolidation of the line-up, buyers will get a choice of just two wheelbases with this new Citan; the earlier short-wheelbase variant has been abandoned, due to a lack of demand. 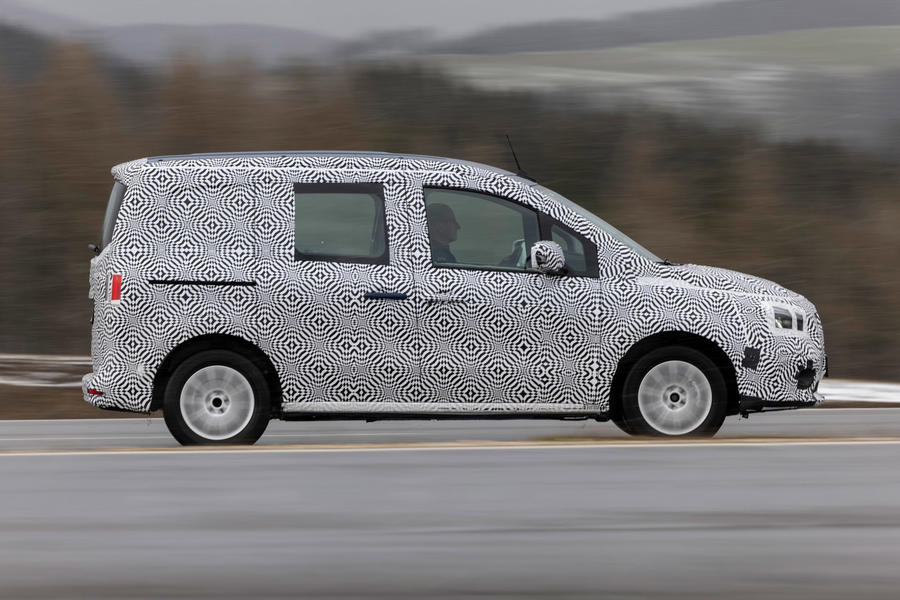 The model we’re in has a standard wheelbase, two conventionally hinged front doors, two rear sliding doors and a tailgate that opens at bumper level, revealing an ultra-low loading lip. A number of other configurations will be available to suit a wide range of usage.

Given the focus on attracting a greater number of leisure-orientated buyers, it seems odd that Mercedes won't offer the Citan, nor it appears the multi-seat T-Class variant, with either a sunroof or a rear screen within the tailgate that can open outwards – features that are found in a number of van-based competitors.

Inside, the emphasis is on space, and indeed there’s loads of it both front and rear. The dashboard of the prototype is covered in a soft fabric material, although we can confirm that the design is far more contemporary and the materials used throughout are of a much higher grade than those found in the old Citan.

There are large door bins, a good size glovebox and a roof-mounted stowage ledge, all providing it with the sort of simplistic functionality that makes cars like this so popular among family car buyers.

The front seats, which have firmer foam inserts than those found in the Kangoo, offer generous manual adjustment, allowing you to crank them up quite high. The result is a commanding driving position that provides good all-round visibility.

The gear lever is mounted with easy reach up high within the middle of the dashboard, although it's quite a stretch down between the front seats to find the manual handbrake.

As with the exterior, there will be a wide range of interior layouts, including both five- and seven-seat variants for the T-Class. In the former, there’s easily enough boot space for the Citan to swallow a washing machine or a couple of bicycles without the need for you to adjust the rear seat.

Like the Kangoo and its sister models, the new Citan is based on Renault’s CMF-C platform and comes exclusively with front-wheel drive.

Mercedes isn't yet revealing much on the engines for its latest commercial vehicle. Buyers can, however, expect a range of turbocharged 1.3-litre four-cylinder petrol and turbocharged 1.5-litre four-cylinder diesel units, as well as an electric drivetrain offering two different power outputs in an upcoming zero-emisson EQT model (twinned with the Kangoo ZE) that's set to go on UK sale in 2022.

Our prototype runs the top-of-the-line petrol engine with 129bhp and 177lb ft of torque – as used through the Renault line-up and in various Mercedes models, including the A-Class, B-Class, CLA and GLB. Coupled to a standard six-speed manual gearbox, it's smooth and reasonably flexible, given its moderate size.

The Renault-produced four-pot isn't overloaded with performance, but it pulls cleanly at the lower end and is surprisingly strong through the mid-range. Engine noise is well isolated from the cabin, too. 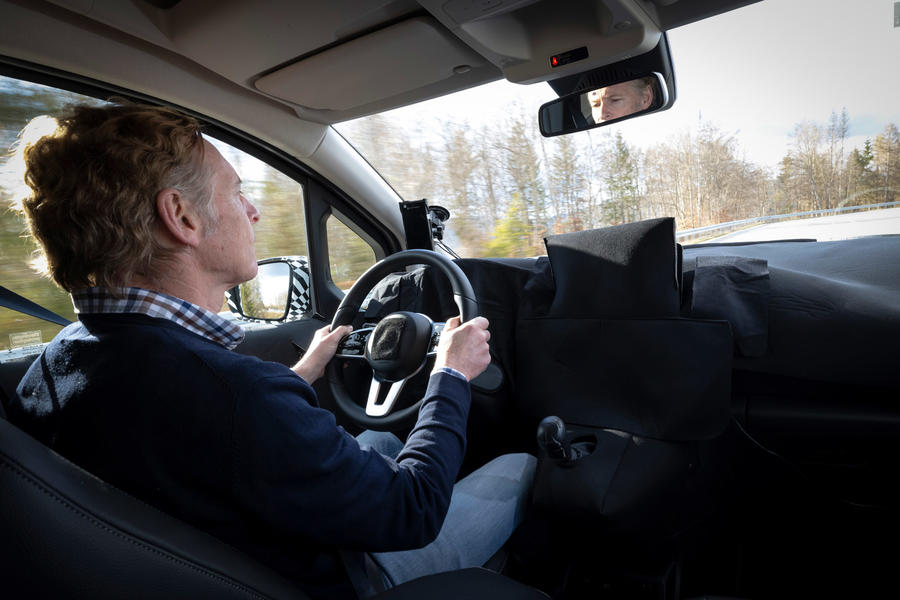 Buyers will be offered an optional seven-speed dual-clutch automatic on selected engines, although Mercedes expects most buyers to opt for the manual.

On the road, the new Citan impresses by being quite a bit more refined and comfortable than its predecessor. There’s excellent control to the suspension – a combination of MacPherson struts up front and a torsion beam arrangement at the rear. With unique spring and damping rates, it copes well with both smaller high-frequency bumps and larger potholes, providing agreeably smooth qualities with particularly good absorption of road shock under compression.

The suspension tuning has been completely reworked with softer spring and damping rates in combination with larger anti-roll bars and firmer bushing than with the first-generation model. “The goal throughout development was to give the Citan a typical Mercedes-Benz driving feel," says Hipp. "It's something our customers demand.”

The electromechanical steering is light and quite highly geared off centre. It gives the Citan excellent low-speed manoeuvrability and accurate turn-in qualities when driven briskly on more open roads.

Body roll is well contained despite the tall body and softness introduced into the suspension. The handling, however, is ultimately defined by the grip levels, which on the 205/55 R17 winter tyres worn by the prototype are surprisingly high even in near-to-sub-zero-temperatures.

The original Citan certainly wasn’t Mercedes' finest hour, but the firm appears to have addressed its weaknesses in this new-from-the-ground-up model.

We’ll have to wait until later this year before we can make any binding judgement, but on the strength of this first drive of a validation prototype, it has clearly made big strides dynamicaly: the handling and ride of the second-generation model are both greatly improved. On top of this, it offers vastly better refinement and comfort than before. 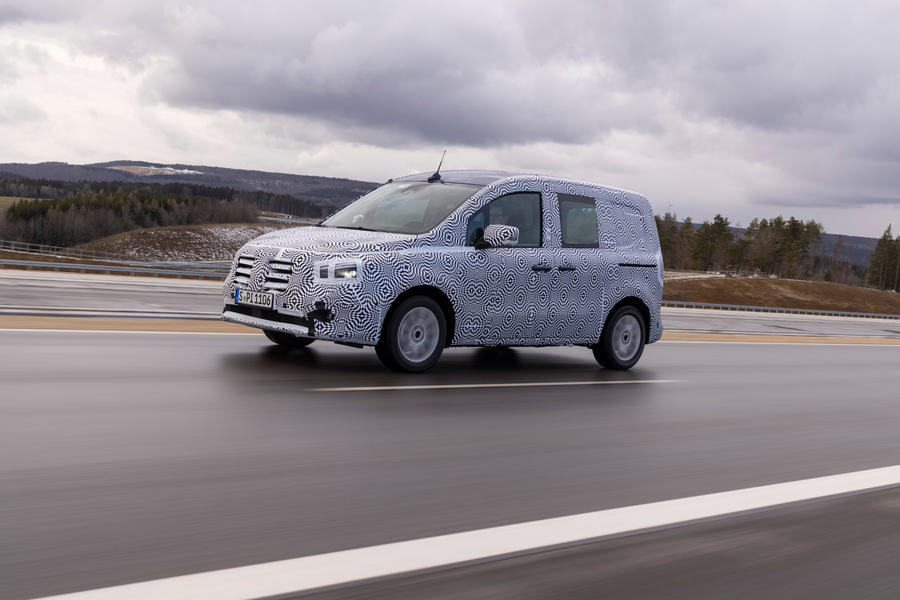 With a contemporary-looking interior that uses more appealing materials throughout, it also provides a solid base for the T-Class, which will line up directly against the Caddy when it goes on sale in the UK with what Mercedes describes as best-in-class features and equipment options.

Improved accommodation and practicality through the adoption of a new platform structure should also make the Citan more attractive to traditional LCV buyers concerned more with overall space and payload.

A five-star Euro NCAP rating will be the icing on the cake, says Hipp.

I used to have a Kangoo MPV a 1-9 TDi it was great fun to drive and was amazingly economical,but Renualt UK couldn't be bothered to promote it,even after it was awarded the Auto Express Budget Car Of The Year. The MPV Kangoo was one of the several models that Renualt UK decided not to import to the UK as sales didn't justify them being sold here. So you've got to ask why are Mercedes importing the T-Class MPV here?, the previous generation Citan MPV  was a very rare sight here in Blighty as it was significantly more expensive than it's Fiat,Ford,PSA & VW competitors. Will it end up the same way as the X-Class another Renualt/Nissan product fitted with a three pointed star at the front and a fancier interior,that lasted about two years,could this be the same?

I'm baffled why Mercedes, a PREMIUM brand and manufacturer feels the need to compete in all segments, especially in passenger models

Yes they've changed it more, but at heart the T-Class is still a Renault van, and is that really the sort of vehicle to sell alongside £100,000 S-Class luxury cars?

The problem with this as a comercial vehicle is that it has a tailgate, not rear doors, a taligate prevents the vehicle being loaded or unloaded by a forklift, it may be able to carry a euro pallet, but its no use if you have to load it by hand.