BACK TO ALL NEWS
Currently reading: Mercedes-AMG to remain exclusive despite growing sales, says boss
UP NEXT
New 2021 Range Rover spotted in long-wheelbase form

AMG will retain its exclusivity despite its flourishing sales, according to boss Tobias Moers.

With sales almost at 100,000 units in 2016, Moers said he doesn’t believe there is a tipping point where AMG models become undesirable.

“It’s all about the strategy," said Moers. "We have increased the number of 63 models and we can now exploit 43 models too.”

He added that he could now track customer journeys at AMG: “For some customers, the C 63 is a little too much, so they start with the C 43 and then move up to the 63 – which also gives us the chance to give even more focus to the 63 models.”

Mercedes sales and marketing boss Britta Seeger referenced the growth of the mainstream Mercedes family including the compact A-Class as an example of ongoing exclusivity despite more sales. “At the end of the day, I think opening the brand to more customer segments makes us more desirable.

“We are offering the A 43, which has fantastic driving performance for a driver not quite ready for a 63 model.” 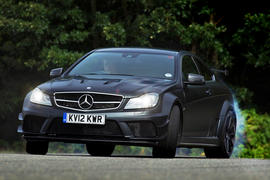 The Mercedes C 63 AMG coupé is turned into a Black Series. It’s good, but how good?

15 May 2017
Well if you want to keep exclusivity Moers then you need to start by getting rid of the dreadful, brand devaluing "AMG Line" trim range...

Truly awful. Nothing to do with AMG and appears on every rep C220....

Too many on the road

15 May 2017
I didn't bother to change my C250 to a new one as every other car is a C or A class. So I'm loving my new Alfa Romeo Giulia.
Also agree that the AMG Sports pack is ridiculous, it's nothing to do with AMG.

15 May 2017
What the above two just said. With news that the S class is now going to be exclusively AMG line, the letters AMG are becoming meaningless marketing guff

Same goes for most of the other brands

15 May 2017
M sport, ST line and R line pretty devaluing too. Silly really. Although I suppose it adds some much needed cachet to boggo products. But it does devalue the "real thing". Bit like all special editions, done to shift the bulk.