From £98,7609
Mercedes-AMG GT Roadster arrives with an upgraded chassis over the Coupé and tweaks that make it even more thrilling to drive
Open gallery
Close

It’s a Mercedes-AMG GT without a roof. It’s called the GT Roadster, unsurprisingly, and it’s tested here in an all-new ‘C’ specification, which sits between the GT S, which is quite fast, and the all-mouth and also all-trousers GT R, which is extremely fast.

That broadens out the GT range to quite a few models now, possibly confusingly, so here’s the simplified rundown. You can get a GT as a coupé and a roadster. All have a 4.0-litre V8 but the angriness of the car and engine package varies. There’s the standard GT, with a mechanical limited-slip differential and 469bhp. Then there’s the GT S, which gets an electronically controlled limited-slip differential and 515bhp. At the moment, this is a coupé only, but a roadster version will come.

And then there’s the GT R: the Porsche 911 GT3 of the Mercedes-AMG GT range, if you like. This has all kinds of angriness and 576bhp and is currently a coupé only (but that might change). The designs of both coupé and roadster versions of the GT have been updated to look more like the R model, which means they get the prominent ‘Panamericana’ grille.

Got that? Good. The important thing for now is that the GT has become a roadster, so it is available with a three-layer fabric hood that can be raised or lowered in 11sec at vehicle speeds of up to 30mph. You can have the hood in a choice of three colours and the interior in more colours than you’ve hitherto been able to have, too.

Again, this broadens the appeal of the GT in the same way that does so intelligently with the 911, making a car for all tastes, countries and levels of driving enthusiast. You or I might like a GT R Coupé with matt paintwork, the Track Pack and the carbon-backed seats. A Floridian tennis coach might want a standard roadster with a beige roof. Now everybody can have what they want.

All GT roadsters get, like the coupés, a mixed-metal monocoque, with a little steel, quite a lot of aluminium and bit of magnesium here and there. In its C form, you can also add some composites, notably for the bootlid, which means that the car weighs 1735kg.

That’s still a fair amount (65kg) heavier than a standard GT roadster, on account of the differential, the active rear steer, more cooling necessity, the wider body/track, and the fact that the C comes with adaptive damping as standard, as well as larger wheels – 19in on the front and 20in on the rear. It also has a leather upgrade inside.

Nonetheless, the power increase is sufficient to give the C a 0-62mph time of 3.7sec, compared with 4.0sec in the regular roadster, and a top speed of 196mph to the standard roadster’s 188mph. You’ll probably want the roof up if you try to attain either. That 4.0-litre V8 I mentioned earlier has two turbochargers and drives the rear wheels through a seven-speed dual-clutch transmission mounted at the rear. 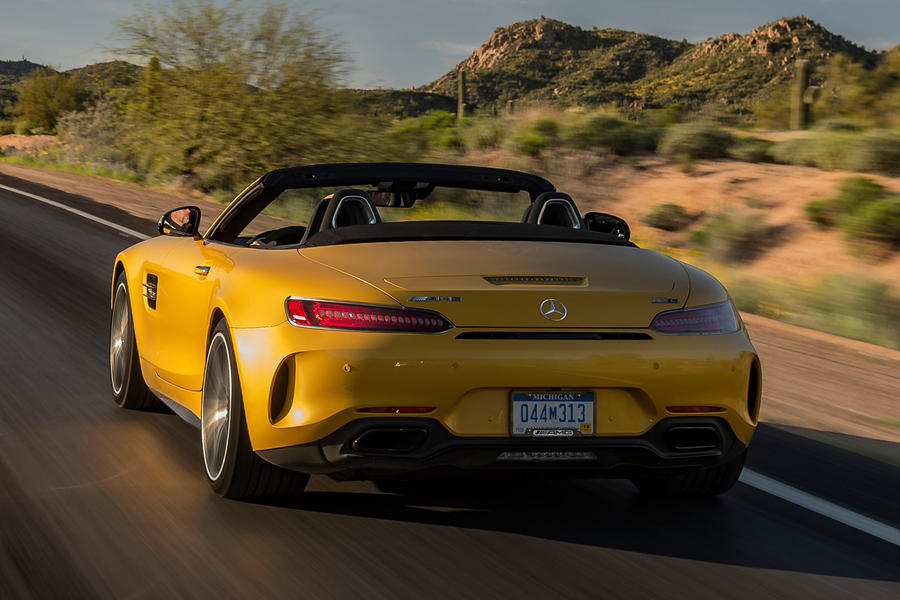 This car is good. I mean, really good. We’ve always been fans of the GT coupé but there were things about the way it drove that were less than satisfying. It was too quick to respond just off straight-ahead, as if AMG was trying to give a car with a long bonnet and wheelbase a greater sense of agility than it needed.

Then it failed to support the cornering stance properly, feeling like it was falling too quickly into oversteer at the rear, and with no great body control or finesse. This meant that it was less than reassuring to drive quickly and it felt pretty wide.

Well, AMG has been at the roadster (and the coupé, too, incidentally, although more on that another time) and has comprehensively sorted this car’s chassis, making a set-up that will be the same on both coupés and roadsters. It’s still quick to turn initially, but body control is much better and steering response more linear, so the car still feels agile, but predictably so, and it corners with far greater purpose, reassurance and feedback. 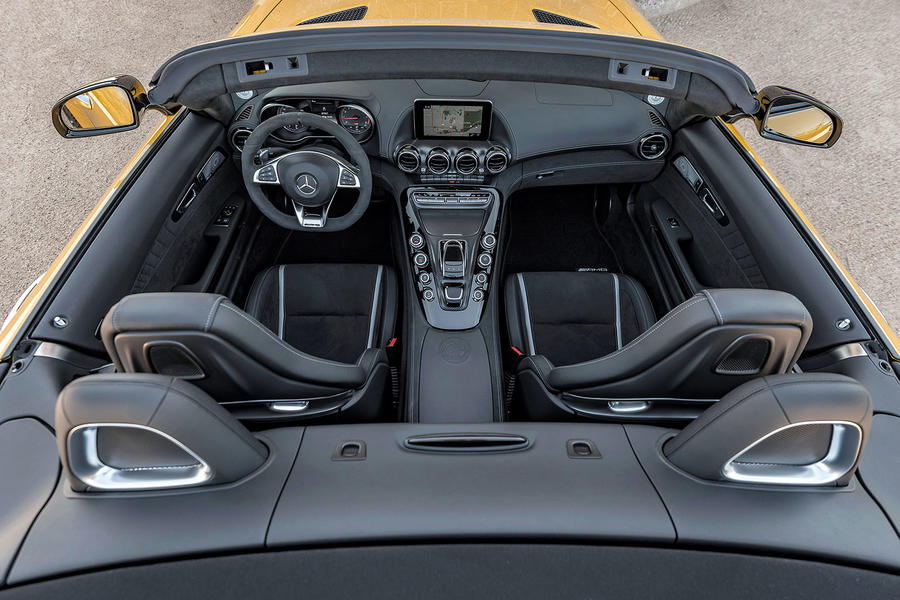 Forget Floridian poseurs: it’s becoming the sports car the coupé should have been in the first place. The C version gets adaptive dampers as standard and the ride quality is reasonable. Sudden edges – potholes, abrupt surface changes – give the GT C Roadster a thud, but at no time do you detect any hint of chassis twist or flex and never does the image in the rear-view mirror shimmy to suggest that much rigidity has gone in the roof-losing process. Weight is up by around 70kg over the coupé, but the three-layer hood itself is nicely engineered. It raises and lowers quickly and looks good up or down.

It’s also very quiet with the hood in place (although one car we tried had some wind noise from the driver’s window that another didn’t, suggesting that it’s sensitive to seals closing properly) and buffeting is minimal with the hood down.

In either hood state, the 4.0-litre V8 is as terrific as we’ve come to expect it will be. It starts with a roar, is very responsive for a turbo unit, always sounds lusty and drives through the seven-speed dual-clutch gearbox cleanly and efficiently. Select gears yourself via flappy paddles and it listens to what you want. Leave it to make the shifts itself and, as you flick through the drive modes, its responses become a little more aggressive and appropriate for swift driving each time.

All in all, the new changes don’t just make for a decent roadster: they also make the GT the 911-troubling sports car it always should have been, rather than just a laid-back GT car that got more flustered the more you asked of it. The Roadster, sure. I’d want to try a coupé with these revisions before saying whether or not it has the measure of a 911. I suspect the narrower, lighter Porsche would still be the better sports car. But remove the roofs of the two and the cars’ slightly different remit puts the argument in a different light. In terms of sound and drama, the GT would have it covered.

Then, of course, there’s the fact that the GT looks a million dollars with this new grille and angrily wide rear track. Those two things alone could swing the argument in the GT’s favour. That it’s now a genuinely exceptional sports car at the same time could comprehensively seal it for the Mercedes-AMG.

The new offering from AMG is the most strikingly beautfiful GT convertible available.

Its wonderful appearance is also matched by its amazing performance and handling and I cannot wait to but one as soon as possible.

Take a closer look and a test drive if you dare.

I saw a couple of them here in Zurich and at the Geneva auto salon. This this is so ridiculously beautiful!!! Even beats my favorite (BMW 6-series Cabrio) :-)
Hedonist 30 March 2017

Overall, I'm not a fan of MB's styling - for me, each model seems to have at least one aspect that looks bolted on at an angle - but this is pretty good. However, the grill is trying far too hard.