BACK TO ALL NEWS
Currently reading: Mercedes-AMG to launch new entry A 45, CLA 45 and GLA 45 models
UP NEXT
New BMW M3 and M4 leak online ahead of tonight's unveiling

Mercedes-Benz’s AMG performance division will extend its compact car line-up with the introduction of a second range of models positioned beneath its existing A 45, CLA 45 and GLA 45 lines.

The two-tier compacy car strategy, which mirrors moves taken further up the AMG line-up, will lead to the launch of a new range of turbocharged 2.0-litre four-cylinder models introduced to the German car maker’s range over the next two years when successor models to the current A-Class, CLA, GLA go on sale.

In announcing the new entry level AMG compact car line-up on the sidelines of the Nürburgring 24 Hours in Germany on Saturday, AMG boss Tobias Moers said: “We will compliment our successful 45 models with two versions like we do with our larger cars.”

In a further boost to AMG’s compact car line-up, Moers also confirmed that the production version of the Concept A-Class saloon revealed at the Shanghai motor show would form the basis for two new models as part of the new two tier approach.

Next Mercedes A-Class to get S-Class tech

“The Compact A sedan has typical AMG features so you can expect that from AMG as well,” said Moers.

The AMG boss also confirmed the successor to the M133 engine used by today’s 45 models will be assembled on site at AMG. “Future four-cylinder performance engines will also be built [at AMG’s engineering headquarters] in Affalterbach,” said Moers. 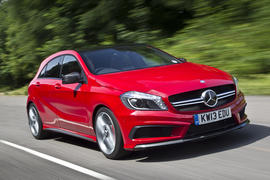 27 May 2017
Sounds like pure pursuit of profit and a further dilution of the AMG brand to me. There was a time (back when they were an independent tuner) when owning a car with the 'AMG' badge meant something but now (just like BMW with M Sport) Mercedes slaps the badge on anything and everything. To me it's as daft as the thought of adding a Maybach badge to any model that's got a luxury spec..How long before buyers that don't know their automotive history just see those three characters as nothing more than model ranking, like S/SE, GL/GLX etc?

No thanks. Stick two of them together 90 degrees apart. Oh, and lose the turbo.

The M178 engine (4.0 V8) used in the more powerfull AMG models is basically two of these in 90 degree angle. Oh, but they kept the turbo, and added another..