BACK TO ALL NEWS
Currently reading: Mercedes-Benz Concept A Saloon brings the fight to BMW, Audi
UP NEXT
New Aston Martin DBR22 is £1.5m, V12 speedster

Mercedes-Benz Concept A Saloon brings the fight to BMW, Audi

The Mercedes-Benz Concept A Saloon, revealed at the Shanghai motor show, previews the striking design of a new entry-level saloon.

A production version is set to reach the UK by the end of next year and will be part of the German firm’s eight-model compact car line-up.

The new four-door has been conceived to challenge the likes of the Audi A3 saloon and upcoming BMW 1 Series saloon. The latter is currently produced and sold exclusively in China, but BMW officials say it is likely to be offered globally when the third-generation 1 Series is launched in 2019.

As with the models offered by its premium brand rivals, the new Mercedes saloon is set to give buyers the choice of a range of four-cylinder petrol and diesel engines, including a 400bhp-plus turbocharged 2.0-litre petrol unit in a range-topping A45 4Matic variant. 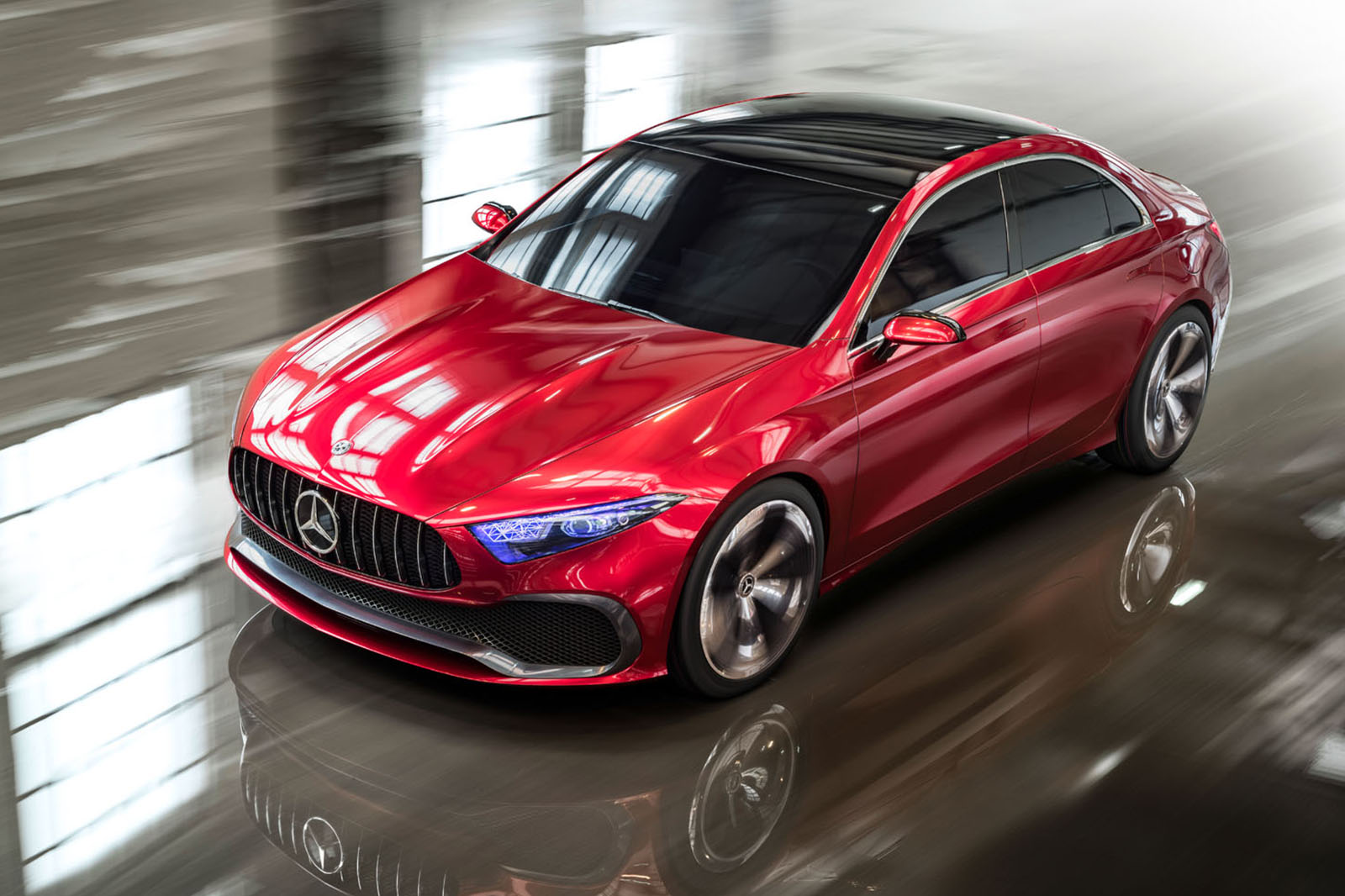 Insiders suggest this car will be added to the Mercedes-AMG line-up in 2019 as a direct competitor to the recently introduced Audi RS3 saloon.

Also planned is a petrol-electric plug-in hybrid version that will offer a pure-electric driving range of up to 31 miles. Alongside standard front-wheel drive, the Mercedes-Benz A-Class saloon is also being engineered to support Mercedes’ multi-plate clutch 4Matic four-wheel drive system in combination with most engines. Again, this mirrors the strategy adopted with Audi and BMW for the A3 saloon and 1 Series saloon.

The identity of the eighth model in the new line-up remains under wraps, although insiders at Mercedes’ headquarters in Stuttgart suggest it may be a two-door cabriolet version of the new SUV to counter the Range Rover Evoque Cabriolet. 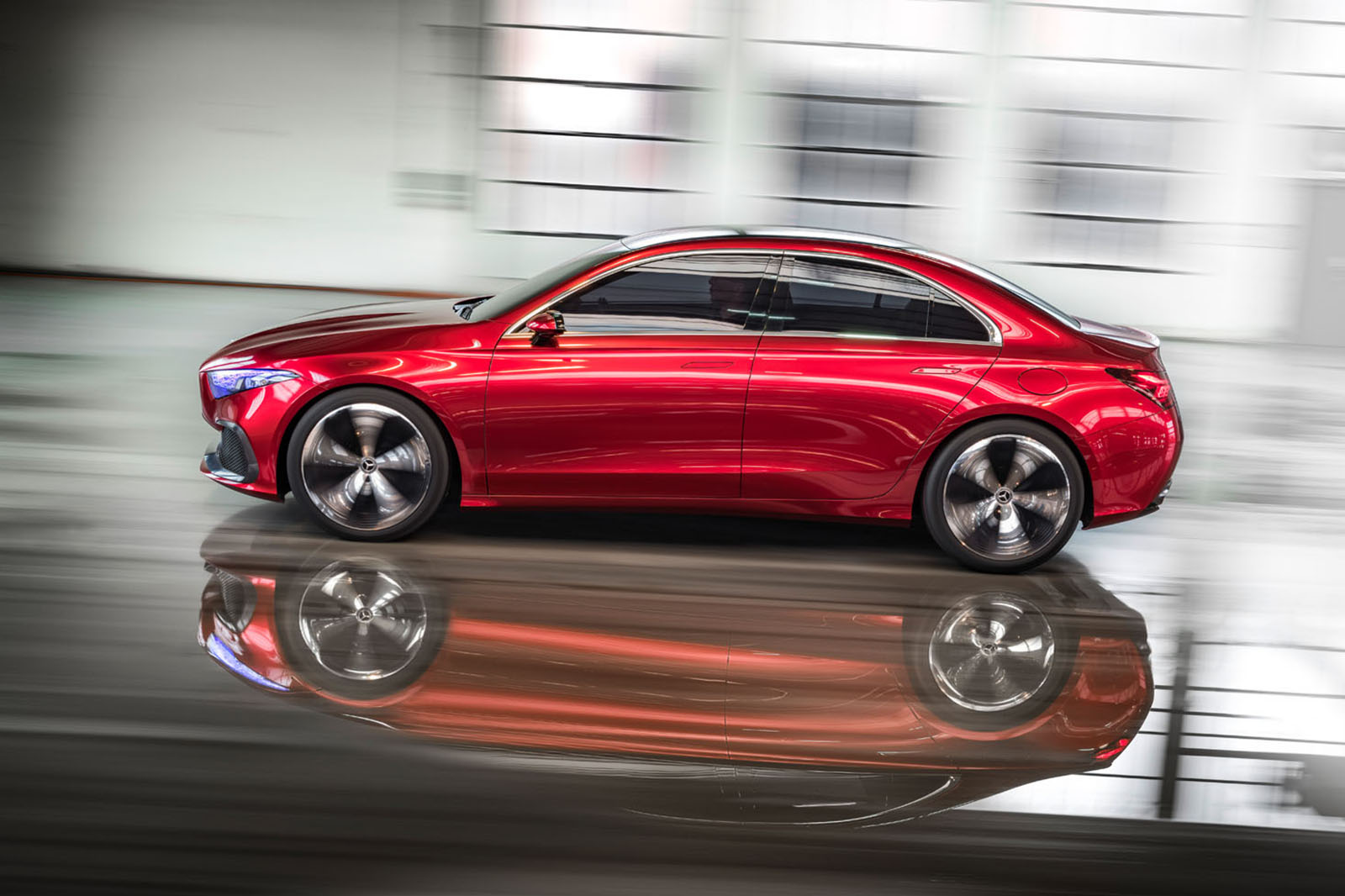 The planned introduction of the A-Class saloon comes in response to customers’ calls for a more practical alternative to the German car maker’s existing price-leading four-door model, the CLA.

Key design elements include what Mercedes describes as the ‘predator face’ — an aggressive-looking front section dominated by a low-set oval-shaped grille, large trapezoidal shaped headlights and a contoured bonnet. The striking new look will be shared across the new A-Class line-up and will also feature on other new Mercedes models, including the third-generation Mercedes-Benz CLS, due out later this year.

The styling reveals a conscious shift away from the heavily sculptured treatment of existing Mercedes-Benz models towards a smoother appearance with fewer crease lines. The Concept A Saloon has a traditional three-box silhouette with short overhangs, a shape that aims to match the practicality offered by the four-door A3 and 1 Series models.

The new look, described by Mercedes design boss Gorden Wagener as a development of the current ‘Sensual Purity’ styling lineage first adopted by the Mercedes-Benz C-Class back in 2014, aims to provide future Mercedes models with ‘timeless’ aesthetic appeal. 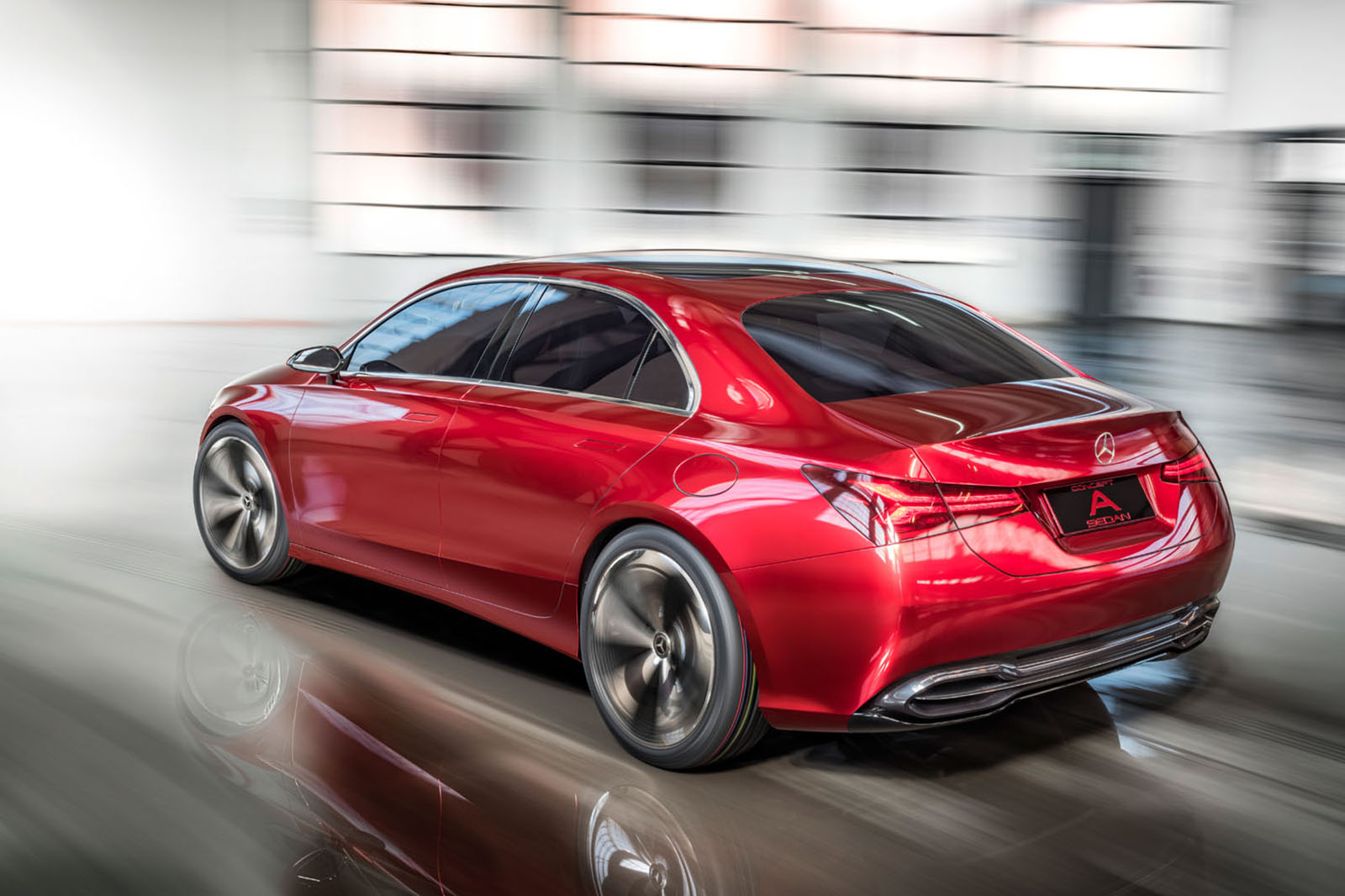 “The Concept A Saloon shows that the time of creases is over,” Wagener said. “Form and body are what remain when creases and lines are reduced to the extreme. [The car] has the potential to introduce a new design era.”

As well as closely hinting at the design of the new A-Class saloon, the Concept A Saloon also reveals the so-called Panamericana grille treatment, with its vertical slats, as well as the aggressively styled front bumper to be adopted by AMG performance versions of the new Mercedes model.

At 4570mm in length, 1870mm in width and 1462mm in height, the Concept A is claimed to mirror the dimensions of the production A-Class saloon that is planned to be assembled alongside the A-Class hatchback, CLA, CLA Shooting Brake and GLA at Mercedes-Benz’s Kecskemét plant in Hungary.

I'm sure I have seen Mercedes A-Class Saloon certainly not as popular as the A-Class but still. In fact I saw one this morning on M20.
bowsersheepdog 19 April 2017

It looks far better in the red, but that probably fake vent across the front is hideous. Lose that and smooth out the creases on the sides and it'd be pretty good because the back end is quite tidy already.
View all comments (11)