BACK TO ALL NEWS
Currently reading: Mercedes-AMG considers F1-inspired supercar
UP NEXT
Bespoke ‘Silent Shadow’ to start EV era at Rolls-Royce

A new, stand-alone Mercedes-AMG model with an F1-derived hybrid powertrain and a carbonfibre tub is under consideration
Share
Close
Share story

Mercedes-Benz is close to approving a second brand new stand-alone AMG model to sit alongside the GT coupé.

AMG boss Tobias Moers told Autocar: “My personal thinking is that we are now at a level where we could support another dedicated AMG model.”

Moers provided no further clue as to the kind of car it might be, but Mercedes is known to be keen to plug the gap in its line-up vacated by the SLS range, whose prices rose to £230,000 for the Black Series model, double that currently charged for the most expensive GT variant.

However, according to Moers, “the car would be totally different to the GT”. Indeed, rather than a traditionally configured, old-school front-engined supercar like the SLS and GT, Mercedes is believed to be considering a cutting-edge, mid-engined hybrid designed to offer a bridge between its established road car product and its now hugely successful F1 operation.

“We have the most energy-dense hybrid pack in existence,” said one insider. “It would make a great deal of sense to harness that technology for the road.” If the car gets the green light, expect it to depend as much on electrical power and extreme lightweight construction techniques for its performance as an internal combustion engine.

That said, it is extremely unlikely the car will follow the lead of the SLS Electric Drive and bin petrol power altogether. For reasons of range, sound and providing the link to F1, a small-capacity V6 is likely to be the preferred primary power source.

Despite brimming with technology, the new AMG is not expected to be a limited edition hypercar like the McLaren P1, LaFerrari or Porsche 918. Moers has in the past acknowledged that the Mercedes-AMG brand is not yet ready to compete at the million-pound price mark.

Instead, it’s more likely the car will be an ultra-high technology alternative to the likes of the McLaren 650S and Ferrari 488 GTB, retailing for around £200,000 and closer to a BMW i8 in concept, but with a totally different level of performance, therefore providing a unique proposition at that position in the market.

If the project is approved, it would most likely take the form of a range of cars, with coupé, convertible and special edition models to maximise its potential. For reasons of strength, stiffness, safety and, above all, to sweat the F1 association, it would make sense to construct the car around a carbonfibre tub, perhaps with aluminium panels to keep both on-the-road and repair costs under control. It would also provide AMG with the ideal opportunity to revive the iconic gullwing doors, mothballed since SLS production ceased in 2014.

Moers and the Daimler board are likely to have been emboldened by the recent extraordinary success of the AMG brand, whose sales have more than doubled in just two years, from 32,000 units in 2013 to more than 68,000 in 2015.

Helping AMG’s cause should be current marketing boss Ola Källenius. A former head of AMG himself, Källenius is shortly to take over as R&D director from the retiring Thomas Weber; his previous positions with the company have included running the F1 engine facility in Brixworth in Northamptonshire. Källenius is also the hot favourite to take over as chief executive of the Daimler Group when Dieter Zetsche’s recently extended contract expires in 2019, around the time that the new AMG would appear if, as expected, plans are approved this year.

In the meantime, development of the GT continues. In addition to the GT R model exclusively revealed by Autocar (16 March), AMG will unveil the roadster version later this year for an on-sale date in spring 2017. 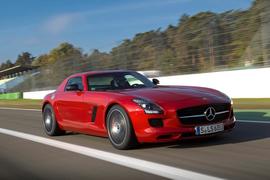 Moers said there would be “a different variant” of the roadster, additional to the standard and S versions. This car is believed to be a high performance model using the 570bhp powertrain from the GT R, but tuned more for fast road use than track work.

Moers is also keen on developing a GT4 race version of the GT coupé, despite the fact that he describes the newly launched GT3 as “too successful — we’re having to chase production all the time”. With Porsche, BMW, Audi and Aston Martin all fielding GT4 cars and with GT3 running costs spiralling ever upwards, Moers sees the category as a good home for gentlemen drivers who lack either the means or the inclination to compete at the top level in an increasingly professional discipline. If approved, the car will be ready to race next season.

As for the much-mooted Black Series variant, Moers acknowledged there is little point “in doing a GT R with a bit more power and even bigger wings”. Instead, he is looking for “a complete departure” for the sub-brand.

“The next Black Series car should be a new interpretation in terms of power output and lightweight design,” he said. “We need to break the rules and do something nobody expects. It has to be a bigger step — a much bigger step.” Ideas are being gathered now and the decision to proceed with the car will be taken this year.

What happened to the all electric SLS that Mercedes promised to build and sell two years ago? Some of us have longer memories than today's press release.
TBC 24 April 2016

I guess it comes down to the board agreeing to invest $50-100 million in something that will never see a profit. The selling point needs to be the legacy it creates, will people still be talking about it in 50 years time?
eseaton 22 April 2016

Hybrid AMG with a little V6?

And expect them to rise even more...

Moers and the Daimler board are likely to have been emboldened by the recent extraordinary success of the AMG brand, whose sales have more than doubled in just two years, from 32,000 units in 2013 to more than 68,000 in 2015.