BACK TO ALL NEWS
Currently reading: McLaren Elva Gulf Theme by MSO adds retro livery to 804bhp speedster
UP NEXT
Tesla to expand select UK Superchargers to other electric vehicles

McLaren's in-house personalisation division, MSO, has revealed the latest special edition of the Elva speedster, which pays homage to the brand's long-standing partnership with Gulf Oil.

Revealed at the closed-doors Goodwood Speedweek, the Elva Gulf Theme by MSO gives the open-cockpit supercar the iconic blue and orange livery that first made its debut on late-1960s and early-1970s Formula 1, Indy and Can-Am race cars. The theme is carried over to the interior, with contrasting white seats and colour-matched dashboard.

This new car is mechanically identical to the rest of the Elva production run, with a 4.0-litre twin-turbocharged V8 powertrain sending 804bhp exclusively to the rear wheels. It can dispatch 0-62mph in less than three seconds. 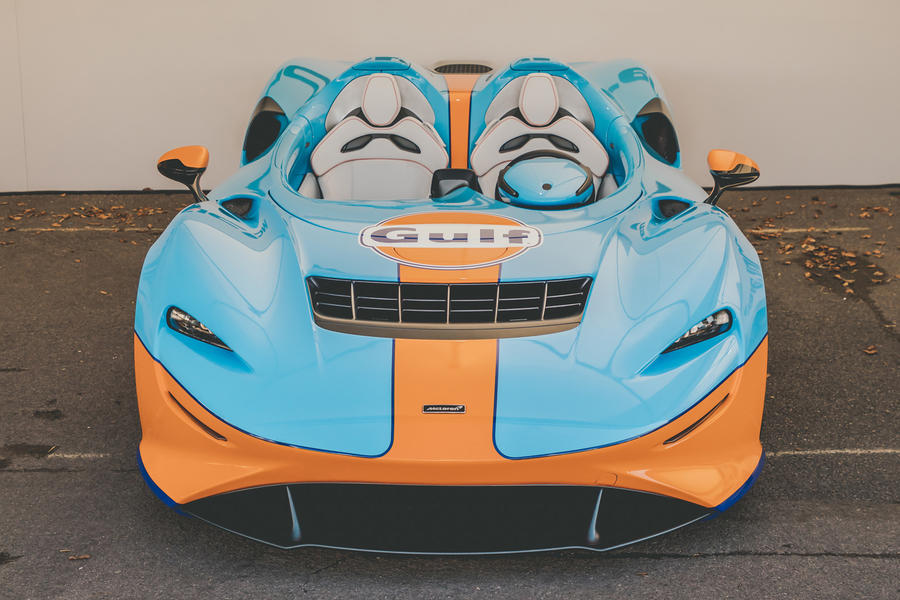 "Projects like this showcase the increasingly extensive range of personalisation options we can offer customers," MSO managing director Ansar Ali said. "In this case, enhancing the authenticity of the livery by incorporating Gulf brand logos into the design.”

This latest design arrives shortly before MSO will begin offering Gulf-liveried cars straight from the factory, following a renewed partnership with Gulf under which specially formulated oil will be provided for McLaren road cars from 2021 onwards.

Just 149 Elva cars will be produced, down from an original projected run of 399 after customers said the £1,425,000 model wasn't exclusive enough compared with rivals, including the Aston Martin Speedster and Ferrari Monza SP2.

Not exclusive enough?!, at £1.425,000?, there's something sadly lacking in these peoples lives if they think this is too cheap.

Not exclusive enough?!, at £1.425,000?, there's something sadly lacking in these peoples lives if they think this is too cheap.

What McLaren meant was they couldn't sell 399 of them.

This is a car everybody is going to want.