BACK TO ALL NEWS
Currently reading: Lamborghini Urus at Goodwood: 641bhp SUV shown in action
UP NEXT
New 2021 BMW M5 CS sets records for pace and power

Lamborghini has demonstrated its 641bhp Urus – described by the brand as a ‘super-SUV’ – on track at the Goodwood Festival of Speed.

At the car's unveil in Bologna, Italy, in December, company boss Stefano Domenicali insisted that the Italian company’s “visionary” new Urus SUV fits perfectly alongside its line-up of supercars.

Domenicali says that level of performance reflects a machine that “elevates the SUV to a level not previously possible”. He said that the Urus is “a true Lamborghini in terms of design, performance, driving dynamics and emotion, as well as drivable every day in a range of environments”.

He added: “The Urus fits perfectly within the Lamborghini family as a high-performance car. It is the culmination of intensive development and passionate skill to create a new brand of bull: a super-SUV that transcends the boundaries of expectations and opens the door to new possibilities, for both our brand and our customers.”

Lamborghini's Stefano Domenicali on why the V12 has a future 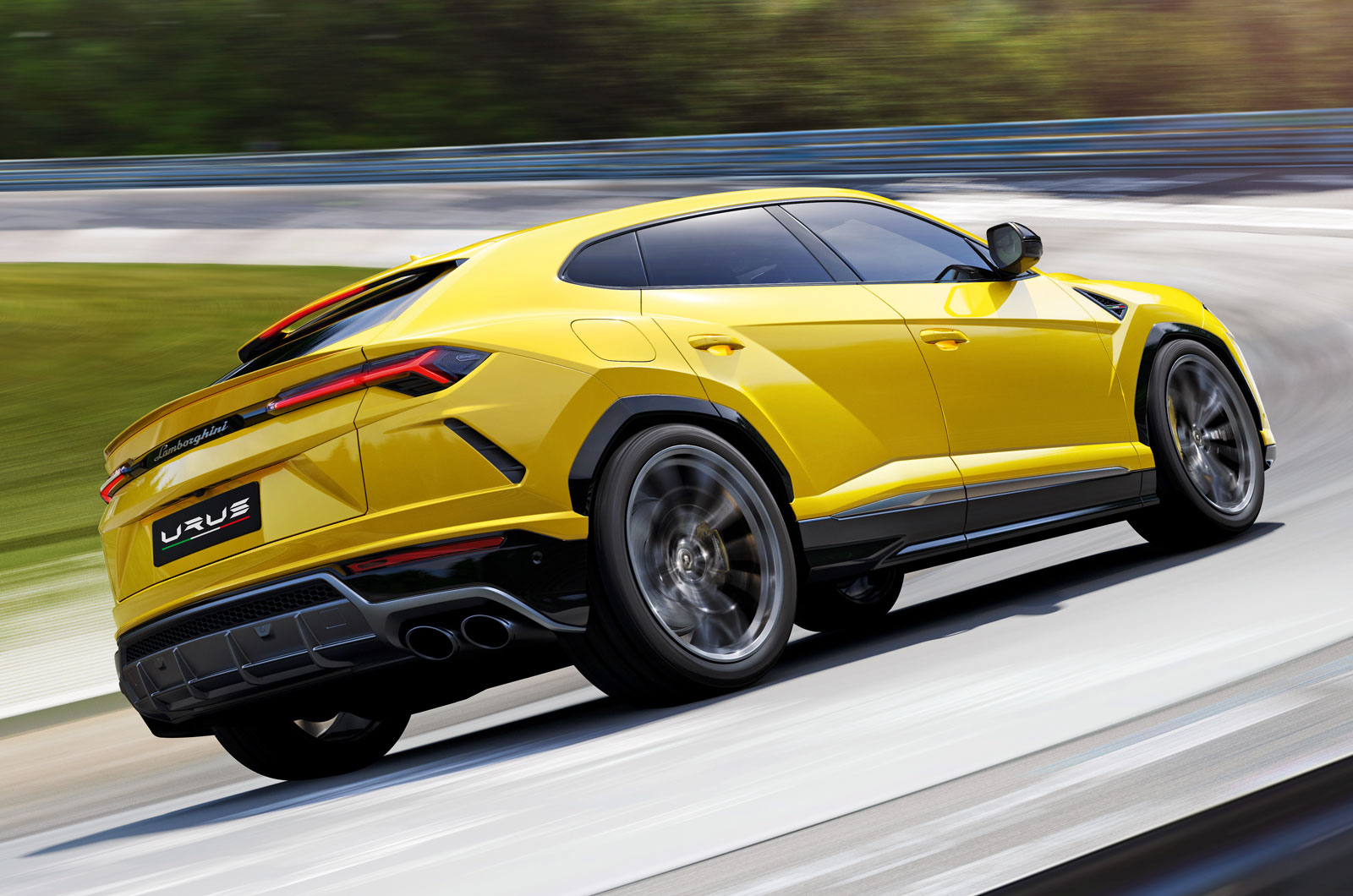 Reflecting those “new possibilities”, the Urus will be built in a new factory at the firm’s Sant’Agata Bolognese base. As a result, Lamborghini’s production output will double to around 7000 cars per year.

The Urus’s dramatic exterior has been designed to embody Lamborghini’s range of supercars – following the same two-thirds body, one-third window ratio – and the firm says it also contains visual links to the LM002, the off-road SUV Lamborghini produced from 1986 until 1993.

The peaked bonnet is styled on those seen on the Miura and Aventador, while diagonal hood lines, first used on the Countach, also feature. The styling, according to the company, has been honed to maximise the car’s aerodynamic potential, with a front splitter and air intakes to channel air to the underbody.

Lamborghini has stuck with naturally aspirated V10 and V12 engines for its Aventador and Huracán, believing that it adds to the emotional experience of driving a supercar, but has used the twin-turbo 4.0-litre petrol powerplant in the Urus. The reason for this, claims the firm, is that SUVs need the additional low-rev torque, especially when being used off-road. The front-mounted unit produces 641bhp at 6800rpm, and 627lb ft between 2240- 4500rpm. As well as hitting 62mph in 3.6sec, the Urus will reach 124.2mph in 12.8sec. Carbon-ceramic brakes – measuring 440 by 40mm at the front and 370 by 30mm at the rear – help the Urus to stop from 62mph in 33.7 metres.

The turbo engine is mounted low in the car to optimise the Urus’ centre of gravity and has been designed with the central turbocharger layout near the combustion chambers to enhance engine response. The twin-scroll turbochargers run in parallel to allow for maximum power when fully loaded, while reducing turbo lag. The unit also features two exhaust flows which, Lambo said, eliminate interference in the exhaust gas cycle and cylinder deactivation to reduce fuel consumption.

Opinion: Will the Lamborghini Urus be able to mask its heavy weight? 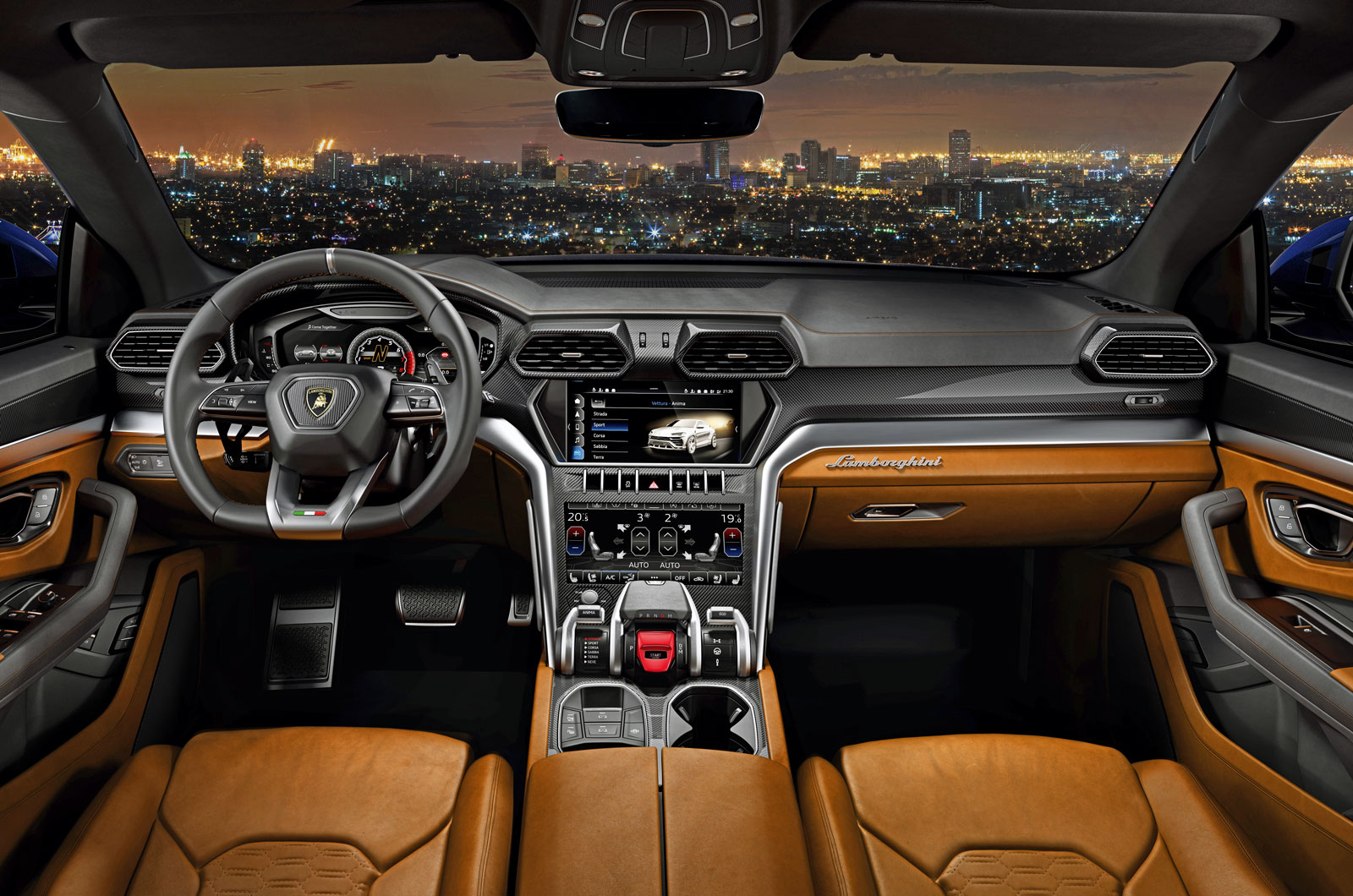 The engine’s power is sent through an eight-speed automatic gearbox, which is electro-hydraulically controlled. The low gear ratios are set short to provide low-end power, with the high gears set at longer intervals. A specially developed torque converter is used to boost the engine response.

Lamborghini will also add a plug-in hybrid engine option to the Urus at a later stage, enabling zero-emission running - essential to ensure the car conforms to stringent emissions legislation in certain areas of the world.

The four-wheel-drive system on the Urus features a Torsen self-locking differential, with torque split 40/60 to the independent front and rear axles respectively. The system can send a maximum of 70% torque to the front wheels, or 87% to the rear, depending on demands. The rear differential features active torque vectoring, which can deliver power to each wheel according to the driving mode, style and grip levels.

The Urus is based on the Volkswagen Group’s MLB Evo platform that has also been used for the Bentley Bentayga, Porsche Cayenne and Audi Q7. The SUV is 5112mm long, 2016mm wide and 1638mm high, with a wheelbase of 3003mm. Lamborghini says the machine has a kerb weight of less than 2200kg, with the chassis using aluminium and steel to maximise stiffness. There are aluminium doors, and torsional beams replacing the traditional C-pillar. Adaptive air suspension allows the Urus to be raised and lowered from 158mm to 248mm to suit conditions, and is also adjusted by the various drive modes. Wheel options extend from 21in to 23in rims and Pirelli has developed a range of tyres especially for the super-SUV. 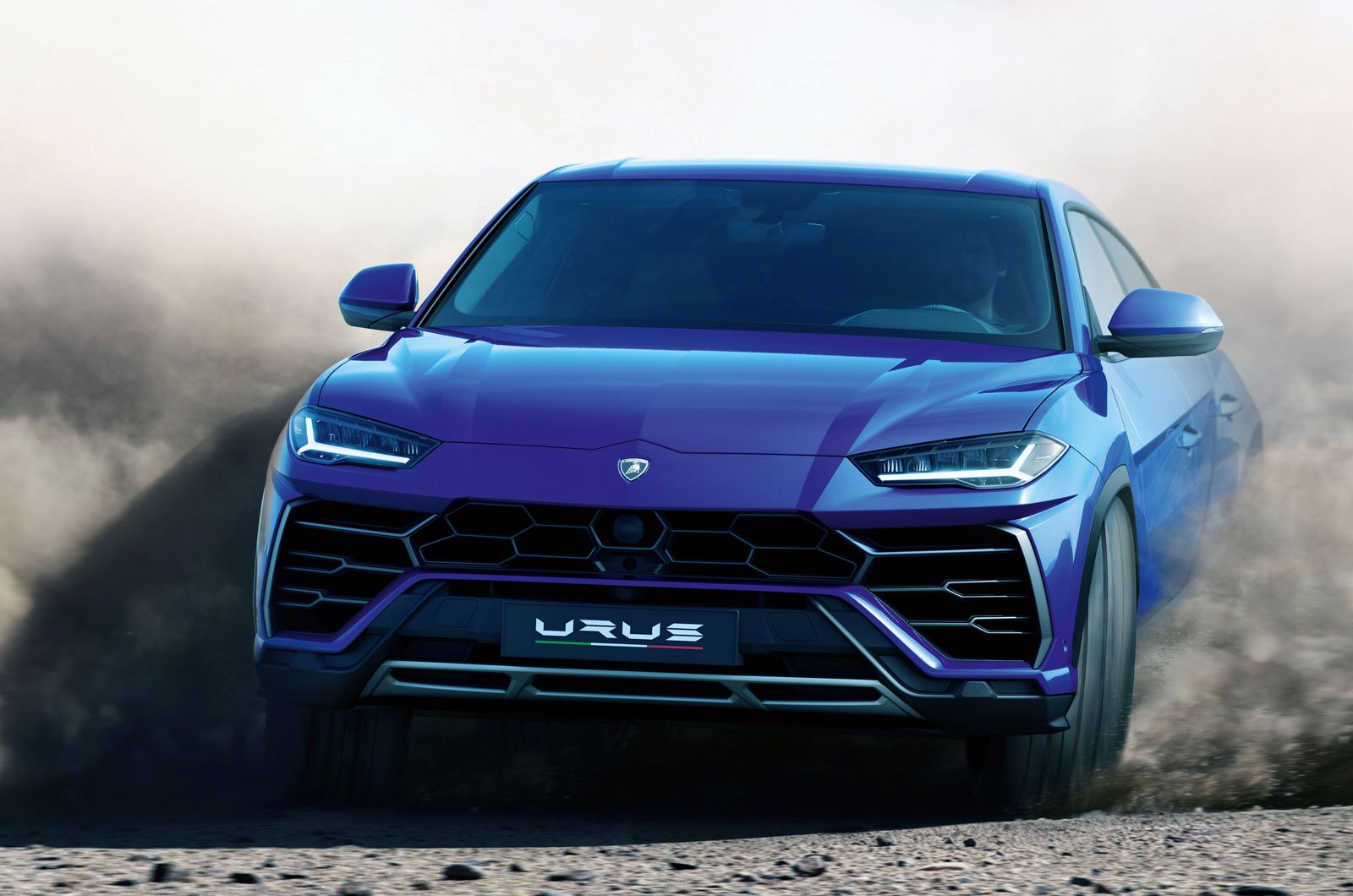 Gallery: the cars of the Lamborghini Museum

The Urus features up to six drive modes, designed to balance the daily usability required from an SUV with the performance expected of a Lamborghini, selected via the centre console ‘Tamburo’. Strada mode quietens the engine and calms the driving dynamics. Selecting Sport mode lowers the Urus for improved stability, while the top Corsa mode offers the most performance-focused drive.

There are also Neve (snow) and optional Terra (off-road) and Sabbia (sand) modes, which all raise the chassis to increase ground clearance, and utilise an electromechanical active roll stabilisation system to smooth the ride. There is also a fully customisable drive mode, called Ego.

The specially tuned damper valves are set to continually adjust to the conditions, hardening when cornering and softening on straights.

Lamborghini insists the Urus is as much about luxury as performance, reflected in an interior design that melds some of the firm’s traditional features with premium SUV elements.

The dashboard’s Y-design is oriented around the driver. Matching current models, the Urus dash also features numerous hexagonal elements, including the air vents and cupholders. The three-spoke steering wheel features vibration damping and there is a customisable TFT driver information display and the latest Lamborghini Infotainment System.

The driver and front passenger get 12-way adjustable heated electric seats, with 18-way adjustable front seats optional. The rear features either a three-seat bench with Isofix points or, as an option, two seats. The Urus has a boot with a 616-litre capacity, which can be extended by folding down the rear of the bench seats.

As with all Lamborghini models, the Urus name is derived from bulls. Urus (alternately known as Aurochs) are extinct wild ancestors of domestic cattle.

it's an Overhaulin Passatt Cc special.

will add 'an' to the spelling of Urus (clue, it's a planet too).

I note you can order it with a tow bar but does anyone know its towing capacity and whether you can fit a tachograph ;-)

I note you can order it with a tow bar but does anyone know its towing capacity and whether you can fit a tachograph ;-)