BACK TO ALL NEWS
Currently reading: Hyundai i30 Fastback N prototype: first drive
UP NEXT
The 414bhp Volvo P1800: Driving Cyan's race-bred resto-mod

The i30 N now has a swoopier sibling - and from our initial impression, it might be a better all-round package for those seeking a hot Hyundai
Share
Open gallery
Close
Share story
News
by Dan Prosser
5 mins read

The i30 Fastback N will be only the second model from Hyundai’s N performance sub-brand to be sold in the UK. It is actually the division’s third model, but the US-market Veloster N isn’t due to come here (much like the America didn’t get the i30 N).

Aside from having a swoopier roofline than the i30N hatchback - Hyundai’s product planners would have us call it a four-door coupe - the i30 Fastback N also has retuned dampers and a number of other suspension tweaks that make it more comfortable and compliant, and a little less demanding on a bumpy road.

The i30 Fastback N has now been revealed - take a look 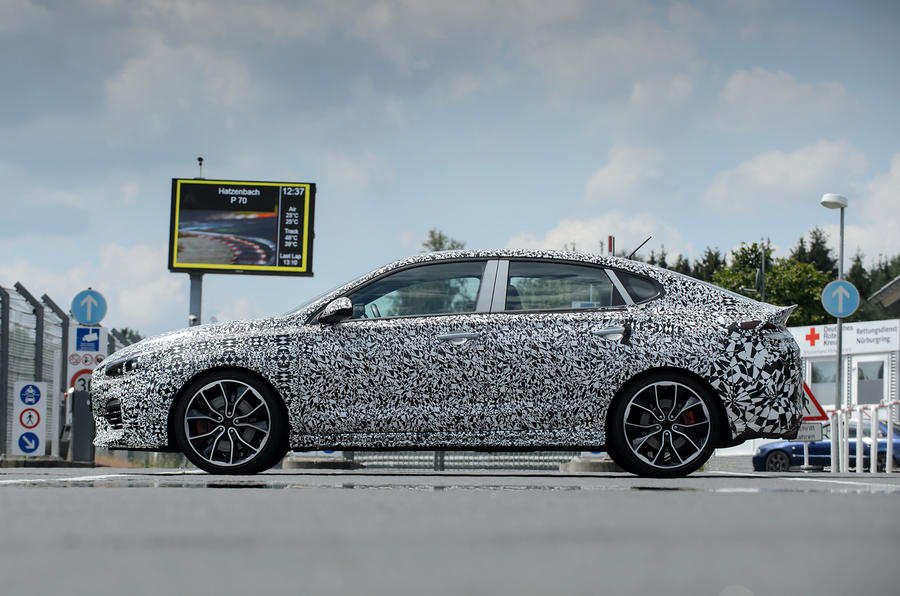 If the i30N hatchback is the tearaway, the i30 Fastback N is the more studious sibling. A little more sophisticated, and concerned with style as much as performance – although its engineers insist it’s still fun to drive.

Weight is up ever so slightly, although the powertrains are completely unchanged. The 2.0-litre turbo petrol engine is available in two states of tune, producing 247 or 271bhp. The only gearbox option is a six-speed manual.

The car tested here is a pre-production prototype in Performance Package spec. That means it uses the more potent engine and also gets a limited slip differential, 19-inch wheels, bigger brakes, Pirelli P Zero tyres and a switchable exhaust.

The car will make its public debut at the Paris motor show this autumn before going on sale in the UK in February next year. The most obvious aesthetic difference between this model and the familiar i30N hatch will clearly be that roofline, but we will notice a handful of other styling changes once the camo wrap is peeled away. 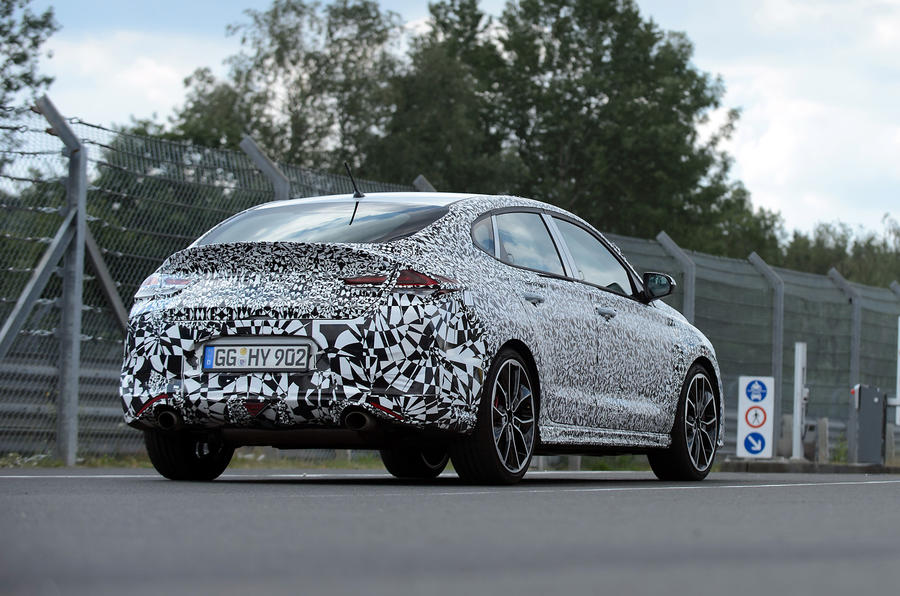 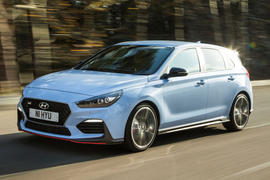 There is only so much that can be gleaned about a car from a single fast lap of a circuit – even one as long as the Nurburgring Nordschleife – but what is abundantly clear is that by pursuing a slightly more compliant and refined set of dynamics, Hyundai’s engineers have not made the i30 Fastback N dull or lifeless to drive. In fact, out on the Nordschleife it isn’t any less thrilling than the hatchback i30 N.

Much like the hatchback version, the i30 Fastback N is very easy to drive at 90 per cent of its performance potential from the first mile onwards, but to get anywhere the final few percentage points would take time, familiarity and plenty of consideration. That gives the car a very definite appeal right across the board - beginners, the more experienced and Nurburgring wizards alike. 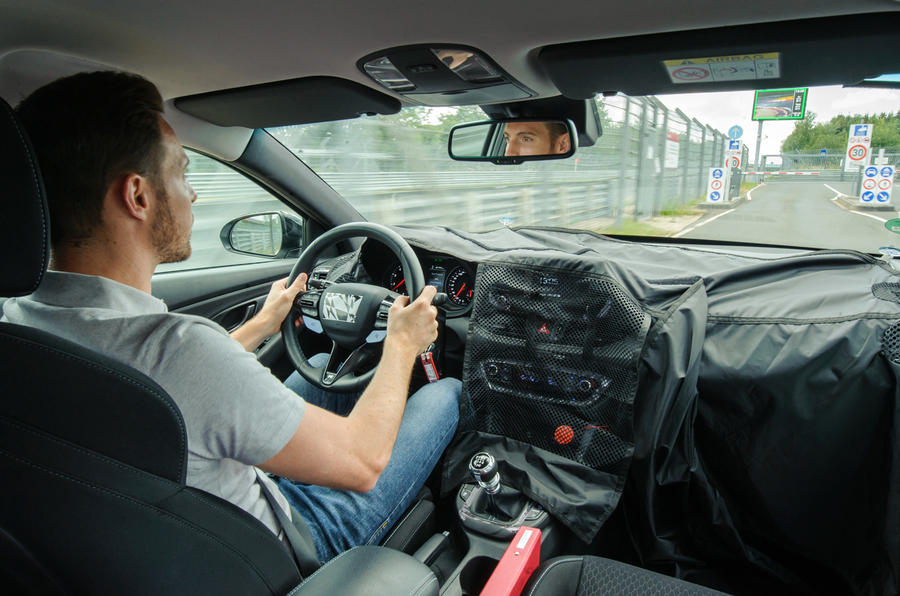 The Pirelli P Zero tyres generate lots of grip, bleeding into moderate understeer at the limit. Even then, there’s enough adjustability in the chassis that the whole driving experience on track isn’t entirely one dimensional. In fact, the i30 Fastback N, like the hatchback, has a reasonably lively and entertaining balance. You can tell by the pedal weights, and how well they match up with the throw of the gearshift and the steering response, that Hyundai’s engineers have lavished care and attention onto the important details. This is no half-baked effort.

The firmest suspension mode is a little too unyielding for a bumpy track like the Nurburgring. The car tends to bounce and skip around, but even so there are occasions when the body squirms and fidgets around, the suspension not quite able to keep the vertical forces in check. The car feels tough and sometimes harsh in that damper setting, but body control still isn’t completely iron-fisted. That, more than anything else, is what distinguishes the i30 Fastback N from the hatchback model on circuit. We’re talking margins, though.

The heftiest steering mode is slightly too weighty, but the medium setting is very well judged. You get a good idea of how hard you’re working the front tyres and the rate of steering response is entirely intuitive. The limited slip differential, meanwhile, is effective without making the front end so nervous and darty that you wish it wasn’t there.

Instead, you just get very good traction and a sweet sense of the car being hauled out of corners the moment you open the throttle. 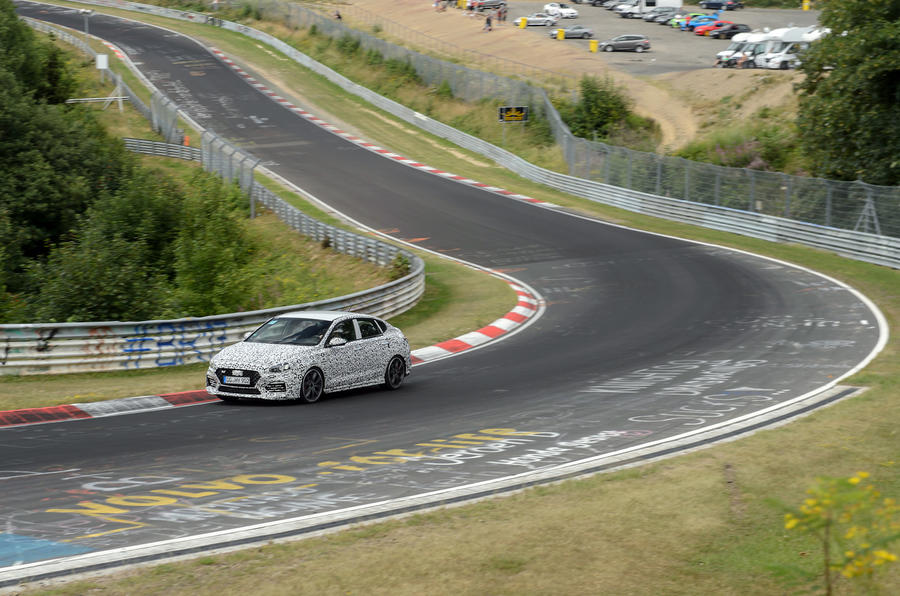 Elsewhere, the gearshift is quick and direct, although the pedals could be better spaced for heel-and-toe shifts - there is a very good rev match function, however - and the engine is strong without ever feeling rampantly powerful the way a Honda Civic Type R’s motor can do. A pity, though, that the Hyundai’s 271bhp lump is a little flat and lacking in energy. At least throttle response is sharp.

We will have to wait until we drive the car in the UK to say for certain, but it wouldn’t be at all unreasonable to expect the slightly more compliant i30 Fastback N to be better suited to our bumpy, potholed roads. A consequence of making this model more comfortable might yet be that it’s actually more fun to drive than the tightly-wound i30N hatchback on our craggy tarmac.

Initial impressions of the i30 Fastback N

If the i30 Fastback N is as good-looking as the people who are paid to say nice things about it tell us it is, it could well be the quick i30 of choice. It’s a unique concept, too; a supposedly stylish four-door coupe with genuine hot hatch performance and dynamics, at an affordable price point (there is no confirmed price, although it will be very similar to the that of the i30N hatchback).

There is plenty of promise here and Hyundai’s N performance division is coming along very nicely indeed. We will see further high performance Hyundais in the coming years, although not exactly a flurry of them, and a little later on there will even be a purpose-built Hyundai N halo car. For now, that is all we’re being told. 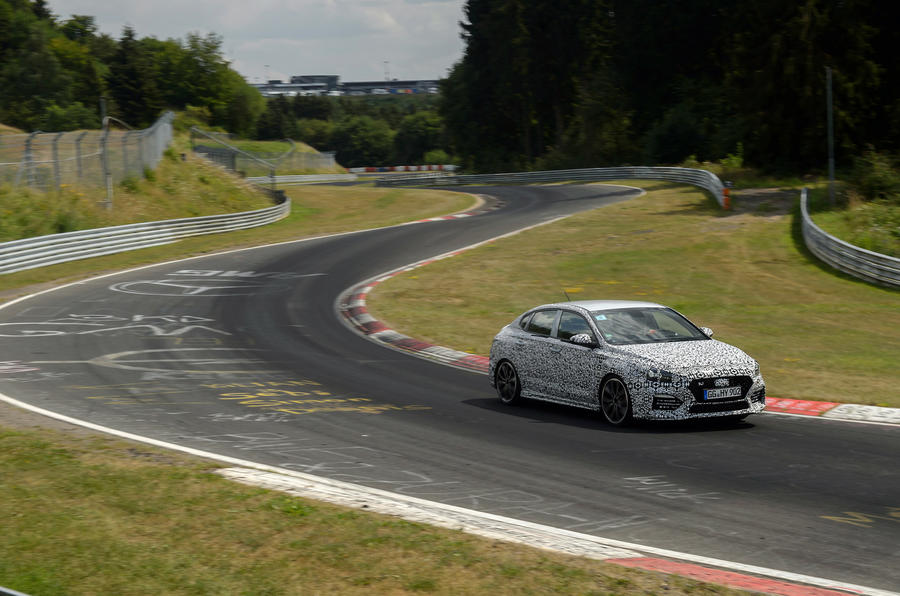 Hyundai i30 Fastback unveiled ahead of 2018 launch

Hyundai i30 N-Line spotted ahead of summer launch

Exciting but get existing i30N owners back on the road!

The N range is a very exciting development for Hyundai. However, as an owner of a new i30N hatchback that is afflicted with the fuel pump ECU problem affecting many owners, please get us back on the road. 4 weeks of driving then 6 weeks waiting for a replacement ECU is not the way to win new owners to the brand.

I think the 4 door coupe tag

I think the 4 door coupe tag is more apt here than it was, for example on the Rover P5 coupe of the early 1960s. I really like this fastback version of the i30: Whilst the A-Class might look similar to the hatch, Mercedes could only dream of having a compact vehicle as attractive as this.

I think the 4 door coupe tag is more apt here than it was, for example on the Rover P5 coupe of the early 1960s. I really like this fastback version of the i30: Whilst the A-Class might look similar to the hatch, Mercedes could only dream of having a compact vehicle as attractive as this.

I too really like this version of the i30, but I prefer fastback to four door coupe as I think it is more apt. But either way in standard specs its a great looking car imo and in N spec it'll probably look even better.

Kind of looks like an.....A Class Merc, no bad thing really, wonder if it’ll be a mild Hybrid too?