BACK TO ALL NEWS
Currently reading: Honda SUV e:concept previews electric production model
UP NEXT
Hyundai i20 N targets Fiesta ST with 201bhp

Honda has revealed its SUV e:concept, a preview of the second model in its electric vehicle range, at the Beijing motor show.

The concept previews the design of a future mass-production EV, said Honda, and will be the first Honda EV to be introduced in China. It remains unclear whether it will come to Europe and the UK.

Honda’s first global EV, the E supermini, arrived earlier this year in the UK. However, it is not sold in China.

Honda has yet to reveal details of the SUV e:concept’s powertrain, but it is likely to expand on the single electric motor fitted to the E, generating more than that car’s 151bhp.

The SUV is also expected to improve on the E’s relatively small range of 125 miles, coming more in line with the 300-mile range of rivals such as the Nissan Ariya.

Only one image has been released so far, but the SUV e:concept bears little resemblance to the Honda E, suggesting the Japanese maker will not have 'Russian-doll' styling for its EV line-up.

While Honda has yet to reveal when production of the model will begin, it is likely to be unveiled next year with production following shortly after.

Although this SUV is set for China, Honda’s plan for Europe and the UK is to electrify all of its mainstream models and introduce six new EVs by the end of 2022. The first of these are the Honda E and the Jazz e:HEV, while hybrid versions of the Civic and the HR-V are expected to follow. 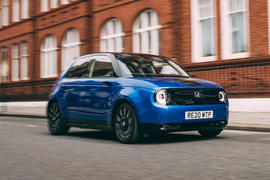 Go on then Honda, build it just looking like that!