BACK TO ALL NEWS
Currently reading: Ford Mustang performance kits released for V8 and Ecoboost models
UP NEXT
Hope for Bloodhound LSR project as sponsor talks start again

Ford has revealed four performance kits for the Mustang, one of which can add 25bhp to the Ecoboost-engined version
Open gallery
Close

The Ford Mustang now has a range of performance enhancing kits, available for the 2.3-litre Ecoboost and 5.0-litre V8 variants in the US.

Ford’s performance pack for the Ecoboost Mustang brings its total power up to 335bhp from 310bhp, but the biggest gain is the 70lb ft leap in torque – with the pack fitted, the Mustang will have 390lb ft on tap.

Gains at specific points within the Ecoboost engine's powerband are more substantial, with an extra 100bhp now available at 6,000rpm. On average, there’s 40bhp more with the pack fitted, and 60lb ft-plus extra between 2,500 and 5,000rpm.

Meanwhile, the 5.0 V8 Mustang GT gets three different performance kits. The mildest of these adds 13bhp and 16lb ft, and the mid-range pack provides 21bhp and 24lb ft. The most potent kit provides a power hike of 37bhp and 5lb ft, and extends the engine's redline to 7,500rpm.

The most basic kit for the V8 engine costs from $599, which is about £487. The most comprehensive of the V8's power kits consists of upgraded air filters, cold air intake, throttle body and an intake adapter from the Shelby Mustang GT350, and costs $2,395 - about £1946. 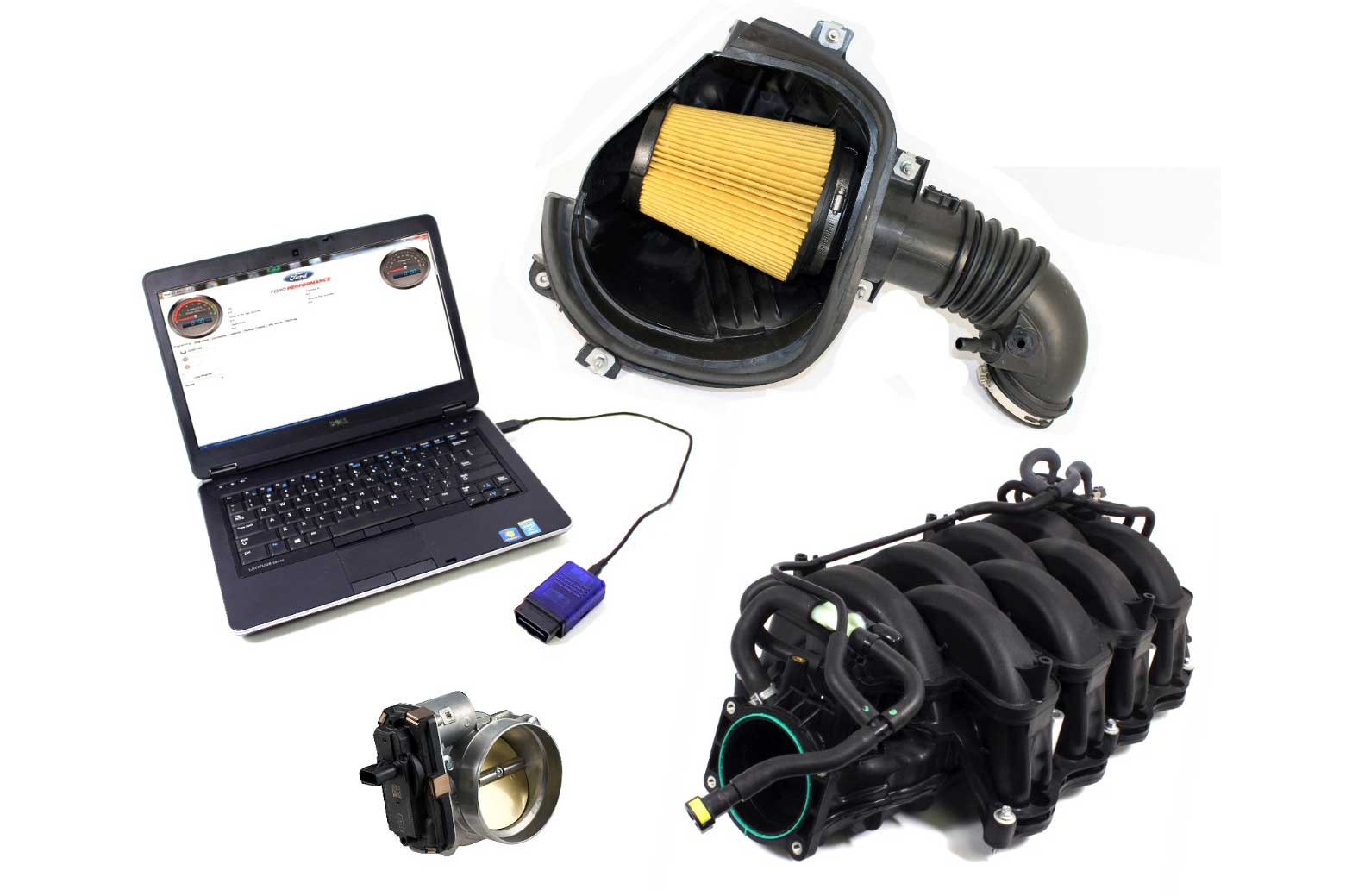 “Ford Performance Parts is a key part of our product strategy,” said Doug White, Ford Performance parts manager. “Mustang is all about performance, and we know our customers look to us for performance options that are both 50-state-compliant and warranty-friendly.”

There’s no word as to whether the kit will be made available to British Mustang owners. An insider said that even if Ford does decide to launch it here, it likely won’t reach the UK market for many more months.

Interestingly, as Ford Performance product development boss Raj Nair predicted back in April, sales of the 2.3-litre engined Mustang are catching up with the V8. In Britain, the Ecoboost model now accounts for around 40% of sales. Nair said he expected global sales to be split 50/50.

A Ford America spokesman kept Ford's statement on the matter fairly simple: "We continue to match production with demand. The Mustang remains the US top seller in its segment in total and retail sales.”

Ford Mustang orders in August was 85 cars, although this jumped to 400 in September. With the Flat Rock plant's comparatively large output, the closure is unlikely to affect UK waiting times. A Ford UK spokesman said that a deposit placed today would secure a UK car for April.

I might suggest that they junk these and get Mountune to provide tuning options for UK Mustangs.
jason_recliner 11 October 2016

Well it depends on what you

Well it depends on what you mean by poor sales. There was a surprising one month drop-off which meant that for the first month in 2 years the Mustang did not out sell the Camaro. One week closure for demand to catch up with supply. Right now the Camaro is a better performer, though so ridiculously butch it's very hard to see out of.
View all comments (5)