New seven-seat compact SUV will go on sale this year priced from around £30,000
Open gallery
Close

The baby G: that’s how Mercedes-Benz describes its latest model, the GLB.

The reference to the G-Class suggests the new SUV model has, in some way, a direct link with the military-grade off-roader, but don’t be fooled by the marketing pitch. Although its distinctive exterior design may display some vague similarities, the GLB is a vastly different proposition from the G-Class – and not just on price, which expected to start at around £30,000.

For one thing, the GLB is based on a stretched version of Mercedes’ second-generation MFA platform, which it shares with the A-Class. But at 4.63m long and with a 100mm-longer wheelbase than the A-Class, it sits firmly above the upcoming second-generation GLA and slightly below the GLC. Mercedes knows that, despite its relative popularity, the GLA lacks the outright space of established SUVs such as the Audi Q3, BMW X1 and Volvo XC40.

Jochen Eck, the Mercedes engineer responsible for vehicle testing in the compact segment, said: “We wanted a roomier car – more multifunctional from an everyday point of view with the ability to accommodate seven occupants when required.” The idea for the new model came after the company’s management decided against a long-wheelbase version of the B-Class MPV. 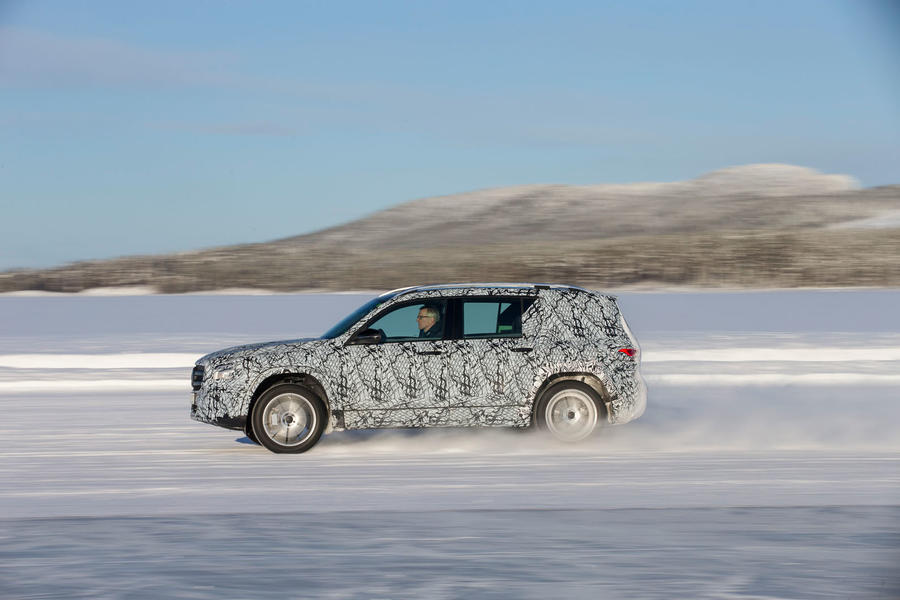 The GLB will go on sale in the last quarter of 2019, so the camouflaged test car we’ve been given the chance to ride in is a pre-production example.

The definitive production version shares broadly the same bodywork as last month’s GLB concept but its detailing is far less off-road oriented. Our prototype is a GLB250 4Matic – the most powerful model at the initial UK launch. The 2.0-litre M264-designated four-cylinder unit makes 221bhp and 248lb ft. Those outputs are set to be boosted significantly for the AMG-tuned GLB35 due later this year.

Butch looks and extra space set the tone for the new GLB. What else can it offer?

We find ourselves inside the GLB on northern Sweden’s notoriously demanding roads in late February. Along with subzero temperatures, there is also a heavy dumping of fresh snow for engineers to cope with as they rack up valuable mileage in one of more than 100 GLB prototypes.

Stepping into the new Mercedes is easy, with a low sill and large door apertures. Most of the prototype’s interior is covered up, although we know the design will be familiar to those who’ve been in the latest A-Class. It also gets the same supportive front seats, albeit mounted higher for a more commanding view of the road.

There’s plenty of leg room in the rear seats, which slide fore and aft by 140mm and split 40/20.40. The nearly vertical side glass and the lack of a sloping roofline make the GLB feel like it leads the class for head room. The third row, optional in the UK and stowed in the floor when not required, is certainly more suitable for children than adults.

Once we’re under way, the engine proves strong and well mannered. Mechanical refinement is one of the GLB’s key attributes. It’s as quiet at posted limits as more expensive siblings. Its stiff body structure – which, Eck claims, has levels of rigidity commensurate with that of the A-Class hatch – also suppresses road noise quite well. 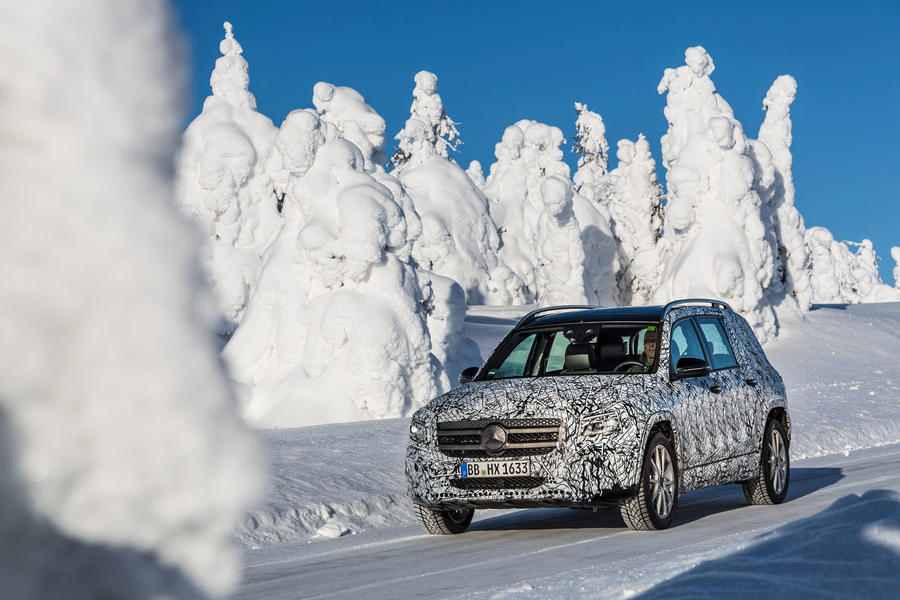 In 4Matic, drive is channelled through a standard eight-speed dual-clutch gearbox and multi-plate-clutch four-wheel drive system, with three drive modes apportioning a different amount of torque between both axles.

The GLB delivers sufficient grip and traction to be convincing even on icy roads. Despite being the tallest MFA-based Mercedes, its centre of gravity is claimed to be quite low for the class, so it can carry plenty of speed through a corner without relying on the stability systems.

Where it really excels, though, is in the calmness of its ride. With greater wheel travel and a longer wheelbase than other compact Mercs, its progress is impressively smooth. The MacPherson-strut front and multi-link rear suspension absorbs bumps and ruts with proper authority – albeit in combination with the (likely optional) adaptive dampers. However, the ride height means its off-road prowess will be limited, in line with what Eck describes as customer expectations. “We could give it more ground clearance and scope for true off-road driving, but that’s not what the customer wants. In this class, it is on-road performance that counts” he said.

Eck doesn’t rule out the chance of the GLB being offered with an off-road package similar to that showcased on the concept. However, it is not planned from launch.

Without true off-road features such as adjustable ride height and low-range gearing, it’s no baby G. But from what we’ve experienced so far, the GLB appears to be a very credible rival to established compact SUVs.

A car going off road needs a spare wheel, where is it housed?

Its 2cm shorter than a GLC

Its 2cm shorter than a GLC and I assume better packaged if it has a 7 seat option unlike the GLC. The GLC is a lot more expensive too so I am wondering what is the purpose of the GLC any more?
scrap 8 May 2019

Oh dear. Lack of proper off

Oh dear. Lack of proper off road kit (even as an option) will kill this car’s credibility. Not a baby G at all.

@scrap - I'd love to know just how many G owners even know what those diff lock and various buttons do, let aone ever use them!