This year's Skoda-student-built concept is a retro, performance-focused take on the Scala hatchback
Open gallery
Close

The Slavia is the seventh concept car to emerge from Skoda’s in-house apprenticeship programme, Azubi, which in previous years has given us the Mountiaq pick-up, Sunroq convertible and beach buggy-style Element, each based on a contemporary production model.

While previous Azubi concepts have looked to a hypothetical future or taken existing models into radically disparate niches, the new Scala-based Slavia is inspired both by the 125-year-old story of the firm's birth and by a prototype racer from the middle of the last century.

Skoda claims the annual unveiling of a radical student-built concept is a tradition that dates back the 1970s, referencing a number of historic one-offs of which few details remain.

The Slavia takes its name from the first push bike produced by Skoda founders Václav Laurin and Václav Klement in 1895, before the company moved into automobile production in the early 1900s. That’s largely where the concept’s links to the primitive two-wheeler start and finish, if you discount the fact that the rear storage bay has been specially adapted to house one of Skoda’s new commuter-friendly e-scooters.

Skoda says: “Personal mobility has always been a passion for Skoda, and the brand is actively exploring new ideas as the automotive world transitions to an electrified future.” 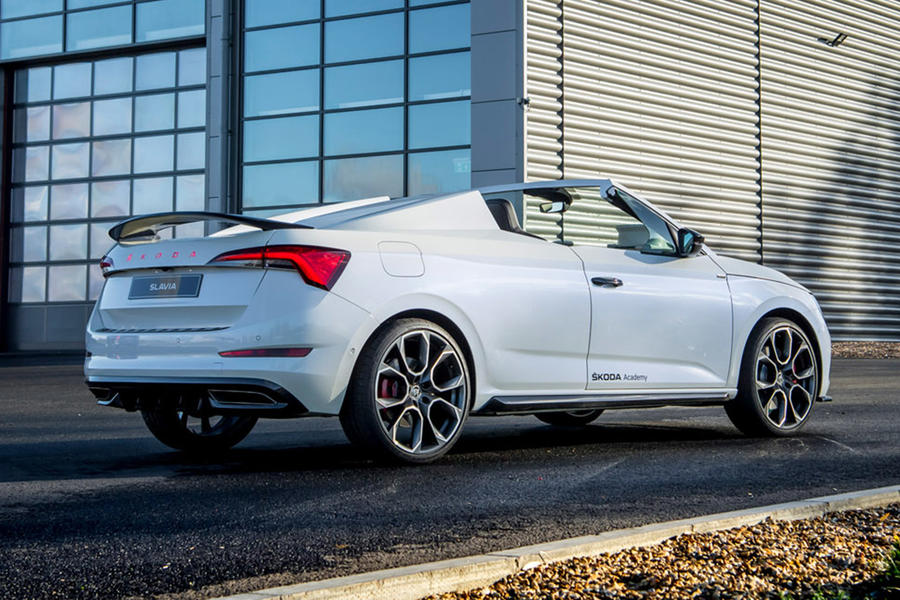 Slightly more obvious are the stylistic parallels with the 1957 1100 OHC - a two-seat open-top sports car from the era when Skoda still produced such things. Structural changes for the Scala hatchback base car are centred around the rear half, where the roof and rear seats have been removed to make way for a swooping, twin-hump rear deck.

Such radical re-engineering of the Volkswagen Polo-based Scala wasn't without its challenges, and the 31-strong team of apprentices involved in the Slavia’s construction have taken significant steps to preserve as much of the original car’s rigidity and space as possible.

In partnership with a team of Skoda body engineers, they have welded the rear doors shut, substantially reinforced the chassis and even re-engineered the windscreen pillars for enhanced rigidity.

The end result is a convincingly sporty take on a car that previously prioritised practicality. A substantial rear wing and 20in alloy wheels borrowed from the Kodiaq vRS lend credibility to the package, which is rounded off with the fitment of a throaty sports exhaust system, bespoke Sparco sports seats, a heavily upgraded sound system and the adoption of subtle contrasting black trim elements inside and out.

As is the norm with Skoda’s Azubi concepts, the Slavia draws its reserves from a powertrain available unaltered from the standard car, in this case a 1.5-litre, 148bhp four-cylinder turbocharged petrol engine that sends its reserves to the front wheels by way of a seven-speed dual-clutch automatic gearbox.

Were such a car to ever make it to production, you might expect it to adopt a motor more befitting its sporting image – perhaps a variant of the 2.0-litre turbocharged EA888 that propels the Octavia vRS – and a six-speed manual gearbox in the vein of its now-defunct (and much more potent) Porsche 911 Speedster cousin, which was produced on a limited scale last year.

Such as it is, the Slavia’s 1.5-litre unit felt more than adequate around the Millbrook Proving Ground’s Alpine course, not least because the lack of roof and onset of inclement weather made spirited driving a rather uncomfortable experience. The overbearing exhaust note, too - while well-suited to this whimsical experiment and not unattractive at idle - serves largely to emphasise the powertrain’s economy-oriented tune, dropping to a distant hum as the gearbox offers up its highest ratios at a cruise. 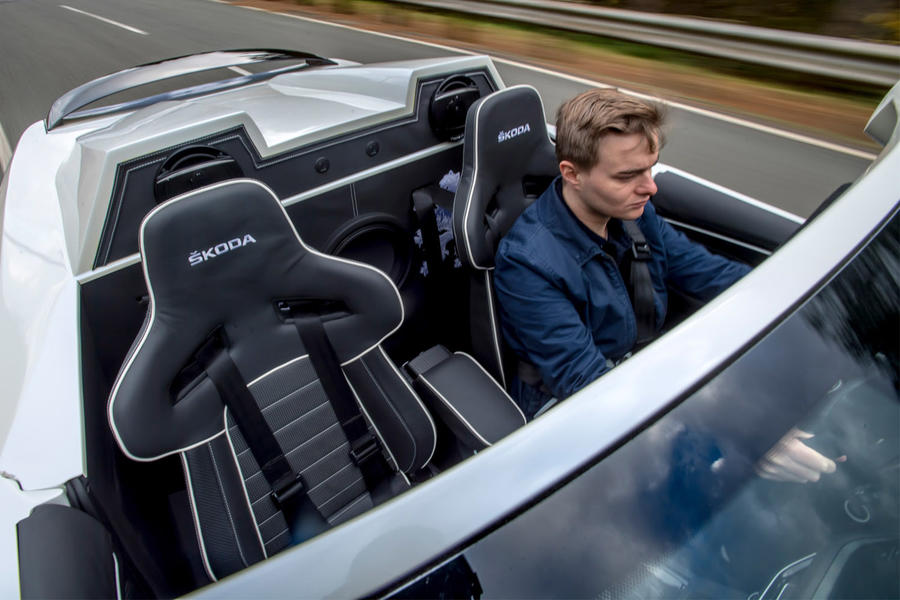 Dynamic behaviour, although hardly put under the microscope on this brief 40mph escapade, seemed remarkably similar to the base car, rarely numb and keen to respond to snap changes in direction, suggesting that all the structural reinforcements have served their purpose.

The more perceptible jolts over surface imperfections can likely be attributed to the 20in wheels, but the caveat remains that these concepts aren't developed to offer production-spec dynamics. The Octavia vRS-derived braking system, while noticeably sharper than that of the standard car, was noisy enough in its operation to discourage emergency stops.

Are we looking at an embryonic prototype for a future Skoda sports car? Not likely, we’re afraid. Way back in 2011, the brand ruled out ever putting such a model into production, such is its focus on big-selling, family-friendly value cars, while noises emanating from Volkswagen Group headquarters suggest that if any brand is to be given the green light to develop new performance-oriented products, it’s Cupra.

It has also been confirmed that the next-generation Skoda Fabia won’t receive a vRS range-topper in a further indication of the brand’s shifting priorities. But, hey, that doesn’t stop its apprentices expressing themselves.

All-new Skoda Fabia due in 2021 with new platform, improved tech

It's certainly different and

It's certainly different and I too see similarities with Renaults wind, not keen on the grill but the rear deck with the squared off blisters looks quite good, far more interesting than another SUV. Only problem is Skoda's shifting priorities, for example no vrs version of the next fabia, but then Skoda hasn't really been a performance oriented brand but it does beg the question, why bother with wasting time on this?
Pietro Cavolonero 7 November 2020

Did you read the article?

@si73 it is a STUDENT project, it was a LEARNING exercise. What time has been wasted then?

This reminds me of the Seat

This reminds me of the Seat Ibiza Cupster from a few years ago.  I'm all for more of these fun cars making it into production.  Not everyone can aspire to supercars but we still want to be able to drive something different and exciting.

... we still want to be able to drive something different and exciting.

To the students that designed

this concept.
Bloody well done!
Any improvements to a Skoda are most welcomed. Keep going.
martin_66 5 November 2020

this concept. Bloody well done! Any improvements to a Skoda are most welcomed. Keep going.

You think this is an improvement?  Oh well, I suppose it's just your opinion.