8
Short-range urban runabout is filled with interesting tech; too impressive to drive out of town for its own good
Open gallery
Close

It’s well-made, well-equipped and extremely cute, but you might as well know from the start that your opinion of Honda’s new supermini EV is going to depend almost entirely on how you view its relatively meagre WLTP cruising range of 125 miles.

This dominant statistic (low compared with most other electric cars currently being rushed to market) directly controls who will buy the Honda E and how it will be used. It’s even more important even than the relatively high price, which starts just over £26,000 for a basic version (after the £3000 government grant) and runs close to £30,000 once you’ve bought the plusher, faster Advance version and added obvious options.

Knowing that range talk will be dominant, Honda is careful to describe the new car as an urban runabout, relentlessly pointing out that the average British motorist’s commute is only about a fifth of the little E’s range, which means its battery has plenty of juice for most suburbanites. If you need more, it implies, better to buy something else. Or own a second car.

The flaw in that argument comes from the E’s innate eye and driver appeal. Its modern, simple reprise of the styling of the 1972 Civic – itself a new kind of Honda back in the day – makes it uniquely appealing among current small cars. Once you’re behind the wheel, it soon dawns on you that the E is also dynamically different from the horde: it avoids the disappointingly oversprung and underdamped suspension of many electric cars (especially those towards the bottom of the size/price range), and that’s another inducement to the driver to use it for more than the low-grade errands implied by the words ‘urban’ and ‘commuter’.

Mind you, it’s easy enough to understand what Honda is saying: the E is a small car, just 3.9 metres long and, even with its modest 35.5kWh battery, the lightest of the two varaints weighs 1514kg. Give it a big battery and you would add 20cm or 150kg and get a car with an entirely different character and price. Other car makers have shied away from uniquely engineered small EVs, and this is why. 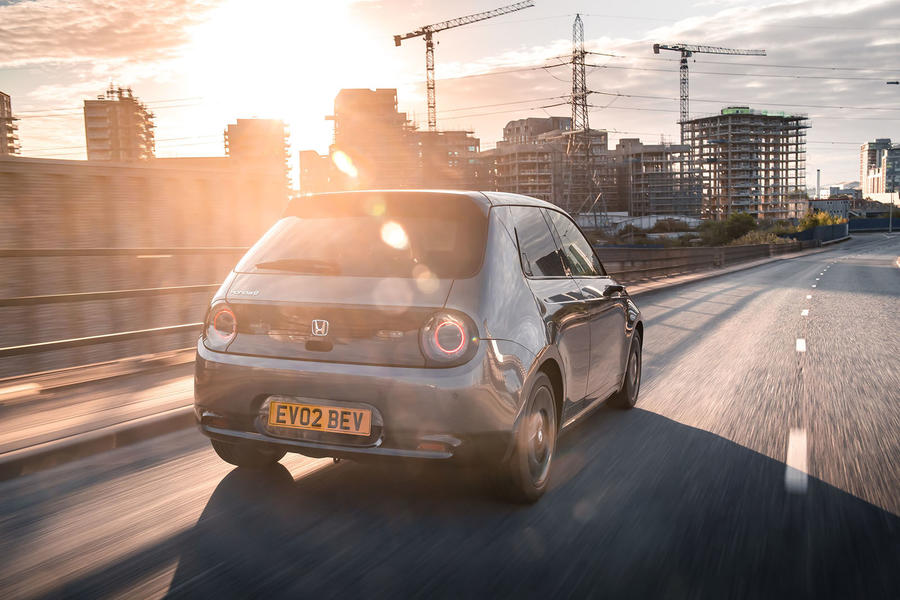 One virtue of the E’s small battery is that it can be charged quickly: about half an hour on a rapid charger lifts it from 20-80% and most home chargers need four or five hours to restore it completely from depletion. If you park the range subject, or reach your own accommodation with it, suddenly you’re talking about a rather special little car.

Honda certainly feels so: it points out that it could simply have strapped a battery under the recently launched front wheel-drive Jazz hybrid (longer and a bit more spacious in the back), but it instead chose to give the E a new platform to give it dynamically pure rear-wheel drive, plus a 50:50 weight distribution and MacPherson strut-type independent suspension at either end. The move away from front-wheel drive also allows the steered wheels to turn very tightly, which yields the taxi-beating turning circle of 8.6 metres between kerbs.

The E’s single electric drive motor sits between its rear wheels. In the base model, it makes 134bhp, while the Advance we tested gets 151bhp. Both are good for 232lb ft of torque (from standstill), but the Advance’s extra power shaves 0.7sec off the 0-62mph time of 9.0sec, even though its extra gear adds around 30kg. Power is fed into the battery via a Type 2 socket under a flap in the bonnet that neatly doubles as a styling feature.

Almost every dimension of the E points to its central purpose. It occupies about the same road footprint as the current Mini, but it’s nearly 10cm taller, so it feels pleasantly high, has a spacious and upright driving position, offers a great view of the road and affords easy cabin access front and rear. The 2530mm wheelbase is one of the longest going for a car of this length; combined with wide tracks and an ultra-low centre of gravity (courtesy of that underfloor battery), this lets the E muster impressive stability and good roll control.

Rear seat room is decent, given the car’s length, but the boot is small, because it has a high floor, due to the drive motor lurking beneath. The interior is a fascinating combination of trim that deliberately uses furniture-influenced fabrics and a matt wood finish across the dashboard (it’s much better than it sounds) to create “a lounge-like experience”. A complete contrast is the flat-fronted fascia, with no fewer than five screens across the dash.

The pair at its extremities provide rear vision: the E uses video cameras, not side mirrors, to look rearward. Ahead of the driver, there’s a classic TFT screen providing all-digital information that’s configurable in a variety of ways, and the rest of the dash is filled by a pair of 12.0in touchscreens, again very versatile in their configurations, but mostly used to control the sat-nav, ventilation and infotainment. A neat switching arrangement lets you swap the contents of the two centre screens so your passenger can juggle music or phone calls or request a new navigation route, then switch it back.

The HMI system will accept requests in a normal, conversational style if you preface them with “Okay, Honda”. The whole thing is a source of fascination to passengers and new drivers; we suspect an owner would need several days to gain full familiarity.

On the road, the E combines the best of small cars and electric cars to make a really enjoyable driving experience. It’s not truly sporty, given the high hip point and the sit-up-and-beg driving position, and some say the seats rather lack side-support for hard cornering. But the combination of a small steering wheel (three turns lock to lock), the tight turning circle and the narrowness of the body (relieved of the usual extra 20cm of mirror width), allied to the built-in low-speed precision of a very good electric powertrain, make the E a great little car for confined areas.

It zips through small traffic spaces and slips easily into tight parking slots. In the Advance, there’s an automatic parking system to help (you still work the brakes), along with an almost bewildering array of electronic crash prevention and traction-keeping measures. No small car has more, all visible and configurable via the screens.

The E is pretty decent on open roads, too. Its long wheelbase, low centre of gravity and lack of overhangs mean it resists pitching far better than most cars of this size, and it efficiently insulates occupants from road noise and bump crashes. 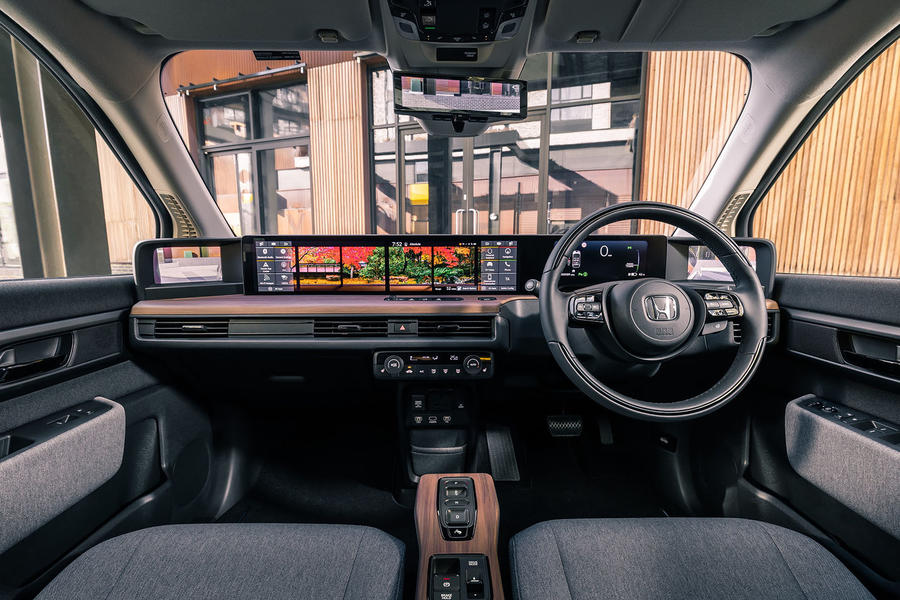 Honda benchmarked this EV against bigger cars for refinement, and it most definitely shows. This is one car you can drive in urban areas without being constantly reminded of the ravaged state of Britain’s roads. Altogether, driving the E is an uplifting experience, which shows a new way for small cars – or at least for small cars that weigh 1.5 tonnes...

The exhaustive launch bumf for the E is succinct about only one thing: that it represents “the start of Honda’s electrification journey”. On the showing of the Japanese brand’s first UK-bound EV, this could well be a bandwagon worth boarding. 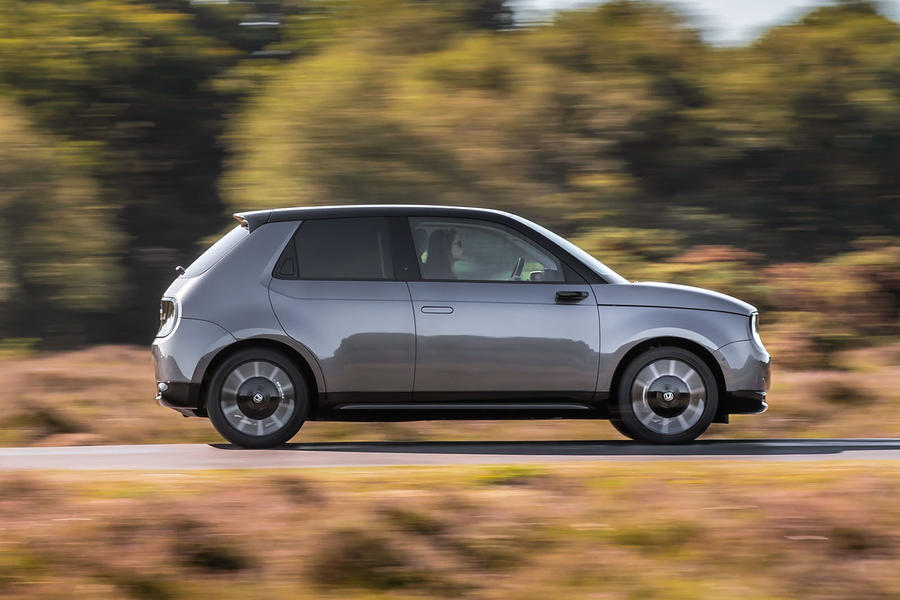 I like the styling, it’s kept enough of the concept for me and is subtly distinctive. As an urban runabout I don’t have concern over the range - there will be enough urbanites with access to small parking spaces and charging to allow it to sell. In its stated environment the tiny turning circle is a real plus.

Where I have issue is the price and the amount of unnecessary tech given its purpose as an ‘urban runabout’. In an urban environment where the demands on your attention are the highest the last thing a driver needs is so many techy distractions and screens. One picture shows at least thirty touch points on the displays beyond the binnacle itself - imagine the criticism if a manufacturer put this many buttons in front of a driver, yet no criticism here? Even if all can be voice controlled or switched off it’s still unnecessary in the environment the car was allegedly designed for. The more so given the very short trips it will mainly be used for.

Keep the styling, ditch the multitude of screens for a binnacle with just speed and range, add a fancy bracket for the top-of-the-range smartphone most customers will have anyway for their playlists and nav, knock £6-7K off the price -sorted!

Honda the great. Thanks for this new product.

I am sadden that Honda have missed an opportunity to reinvigorate their brand with this unique little car. Great design but range too poor and just too expensive. Probably would have found some niche sales by appealing to those who could discount one of those factors but the combination will be a killer in the UK. I understand the desire to keep weight to a minimum but surely even a 40kwh battery pack with a WTLP range of 140 miles would not have involved too great a compromise. £30k just too expensive for a city car which isn't very useful to transport the kids.