Born with 93% local content, Skoda’s latest baby is more Indian than Czech. It has fittingly been given an Indian-sounding name, derived from the Sanskrit word for king or emperor.

For Skoda, the Kushaq is much more than just another SUV in its range. It’s the start of an all-new chapter in India, not just for the Czech brand but for the entire Volkswagen Group.

The Kushaq marks the fruition of the India 2.0 strategy, in which the Volkswagen Group tore up the rulebook, went back to the drawing board and put Skoda in charge of its operations in India.

It was a radical move that no doubt left some in Wolfsburg red-faced. But after a decade of trying to hack the ultra-low-margin Indian market, Volkswagen had finally given up and left the job to its Czech sibling brand, whose lower cost structure is more in sync with India's price-sensitive demands.

Besides, Volkswagen had bigger fires to put out in the aftermath of Dieselgate; India was proving to be a distraction in the larger scheme of things. At the same time, it didn’t want to give up on the world’s fourth-largest new car market, and the best option to stay in the game was to throw in its lot with Skoda.

The plan was simple. Volkswagen would focus on electrification for the Group, while Skoda was entrusted with developing a slew of affordable and low-cost products for both brands that would target emerging markets.

The Kushaq is the first India 2.0 product, and it has the entire weight of the Group riding on it. Expectations are sky-high from this all-new model that will set the standard for a range of made-for-India models (the Volkswagen Taigun will follow it in a few months).

Both the Kushaq and the Taigun will be acid tests of Skoda’s capability in delivering cars with the kind of values that Indian customers want. 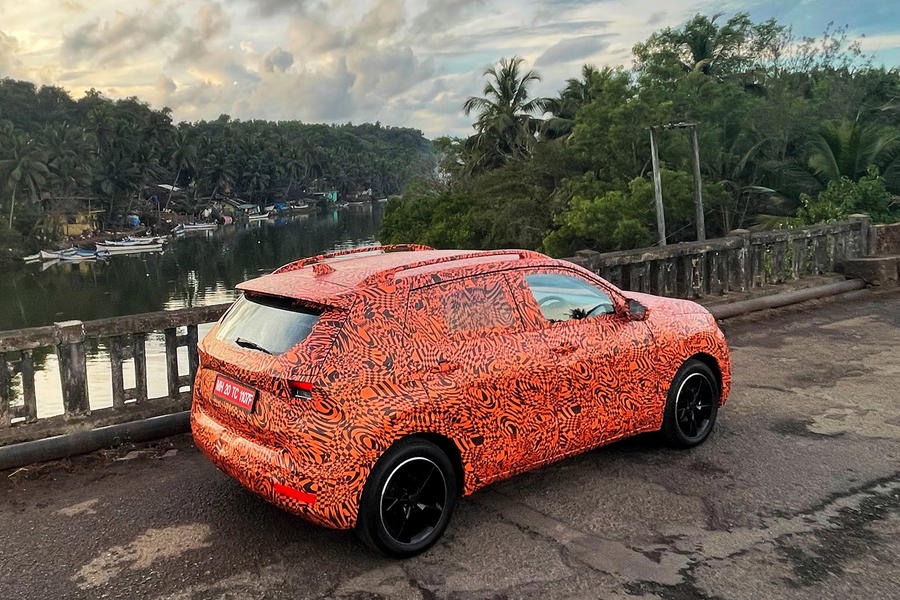 We're in sunny Goa driving an early prototype to get our first taste of the Kushaq, but we can’t tell you if it looks the part, because it's heavily camouflaged ahead of its unveiling in March. While Skoda doesn’t want us to spoil the surprise, we know it will be very close to the Vison IN concept that was unveiled at last year’s Auto Expo in New Delhi.

What we can talk about for certain is what’s under the orange-and-black clothing. The starting point for the Kushaq is the MQB-A0 platform, which underpins a huge number of models across the various Volkswagen Group brands.

The good thing is that this platform is ‘package-protected’ for a growing wave of future technology that’s quickly finding its way into mass-market cars. Things like 5G connectivity, digital cockpits, ADAS and even electrification can be plugged into the MQB-A0 cars as and when customers or regulations demand them.

The bad thing is that the MQB-A0, originally conceived for European markets, is inherently a high-cost platform, and that was the sticking point for the viability of the India 2.0 project. However, Skoda achieved a breakthrough on costs with heavy localisation and some frugal engineering, and this has spawned an Indian derivative of the MQB-AO, suitably suffixed with IN.

The first Kushaq on the MQB-AO (IN) platform, then, will roll off the Chakan assembly line with parts and components that are more than 90% locally made. That’s impressive when you consider that, over the previous decade, the Volkswagen Group couldn’t manage a local content level exceeding 76%.

Skoda has also carefully specced the Kushaq to Indian requirements to eke out further cost savings. There’s no point designing components for -40deg C in a country where the ambient temperatures usually hit 40deg C or above.

The brutal degree of value engineering hints at a price that will be very competitive. “We will continue to have a positioning of value luxury, said Skoda India managing director Gurpratap Boparai. "Clearly we do want to do volumes, so the car will be competitively priced, but we’ll continue to be slightly premium and hold our position of ‘value luxury'.”

The Kushaq’s exact dimensions are unknown, but it’s roughly Skoda Kamiq-sized, and that puts it in the thick of India’s SUV market. The only dimension Skoda has officially released is the wheelbase, which at 2651mm is the longest in the class and bodes well for interior space, especially at the rear. 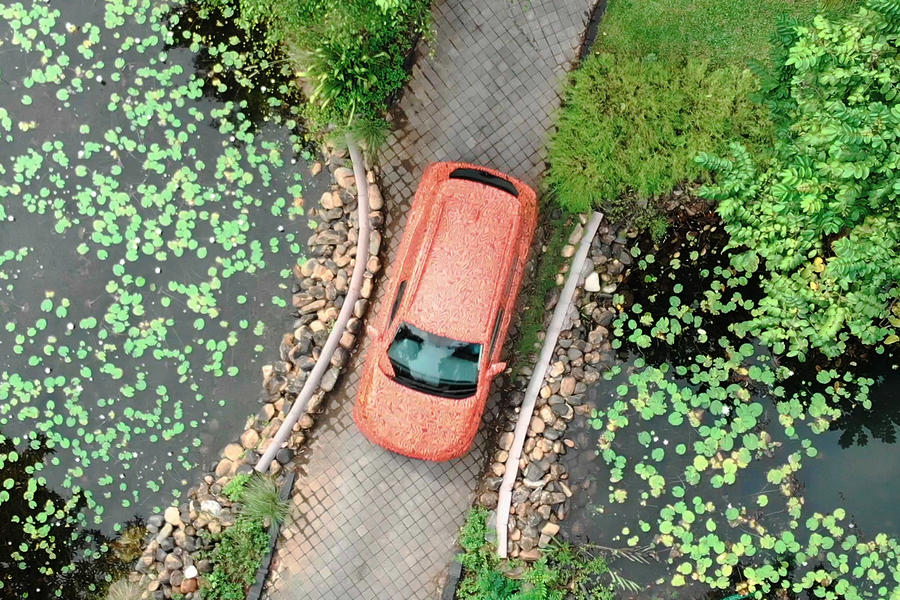 So let’s begin by slipping into the back. There’s enough space for six-footers to stretch out, a deep squab that nicely supports your thighs and an optimally angled backrest that can be flipped down to enhance the versatility of the spacious boot.

The cabin isn’t particularly wide, though, and the contoured seats make the bench best for two. Also, the high-set front seat and high window line limit visibility a bit.

Skoda has flattened the transmission tunnel slightly to make it comfier for the middle passenger, and this bit of re-engineering of the floor pan effectively rules out a 4x4 option.

Up front, a pair of heavily contoured seats does a great job in delivering a supremely comfortable seating position. The ergonomics are spot on and overall visibility is superb.

The Kushaq will come with two turbo petrol engines: a 1.0-litre three-cylinder and a 1.5-litre four-cylinder, both with manual and automatic gearbox options. There’s no diesel planned.

Suprisingly, the 1.0 TSI impressed us even more than the significantly more powerful 1.5 TSI. It feels like a different animal under the bonnet of the Kushaq, compared with in the Volkswagen T-Roc.

Firstly, it's remarkably smooth at idle and rocks less – the upshot of finely tuned engine mounts. The six-speed gearbox is a carryover too, yet it feels smoother in the Kushaq, which benefits from redesigned linkages for a better shift. The only fly in the ointment is the clutch, which can be a touch snappy and could do with a more progressive bite.

The 1.0 TSI doesn’t cease to astound, making a mockery of the old ‘there’s no replacement for displacement’ claim. Except for some sluggishness at low revs, it doesn't disappoint. Its hallmark is its broad spread of torque, which builds up smoothly from as low as 2000rpm and surges strongly until you hit the 6200rpm limiter.

It feels best when you're riding the meaty mid-range, letting it operate in the 2500-4000rpm zone; you don’t feel the need to keep shifting down every time the revs drop.

Where Skoda has absolutely aced it is with the dynamics, and although our car is a prototype, I will stick my neck out and say that the Kushaq will set a new benchmark for ride and handling in its class.

Apart from a fair bit of slack around the straight-ahead position, the steering is perfectly weighted. It's light enough to make low-speed driving and parking easy and has enough heft to give you the confidence to drive fast.

Indeed, confidence is something that the Kushaq gives you in abundance. It has a remarkably flat ride, even on bumpy roads, and its poise at high speeds will make it a great highway car. The best bit is that this taut body control hasn’t come at the expense of ride: ruts, speed bumps and sharp edges are nicely muffled, helped in no small measure by the fairly tall profile of the 205/55 R17 tyres.

Switching to the 1.5 TSI DSG didn’t heighten the driving experience as much I thought it would. Sure, you can feel the extra slug of power and torque the moment you tap the throttle, but the dual-clutch gearbox, with its characteristic momentary hesitation after you put your foot down, doesn’t give you the same direct link with the engine as a manual.

In auto mode, the DSG has been programmed to upshift quite early, but use the manual option and it holds onto each gear for longer. It’s just that, like with the 1.0 TSI, there’s a fair bit of engine noise seeping into the cabin when you near the redline.

A marked difference between the 1.0 TSI and 1.5 TSI versions of the Kushaq is in the way they handle. The 1.5 TSI feels distinctly more nose-heavy and pitches a fair bit on undulating roads, despite a stiffer suspension to factor in the heavier engine. The 1.0 TSI, in contrast, feels lighter on its feet, turning into corners with more verve.

Both exhibit some body roll, but it's well contained, so neither will feel like a handful. And Skoda was quick to stress that the suspension calibrations on our test cars were far from final.

Skoda will share the equipment list only after the launch event, but it claims that the Kushaq has best-in-class safety features, including things like electronic stability control.

We can’t comment on the cabin, because it was totally covered up, but expect it to have all the toys that Indian customers want – although a regular sunroof is standard, rather than the more sought-after panoramic type.

There’s still a lot about the Kushaq we don’t know, but going by what we’ve experienced so far, it comes across as a well-engineered and very solid SUV. There’s a quiet optimism – even smugness – within Skoda that its new baby will shock punters when the wraps come off, and we can understand why. 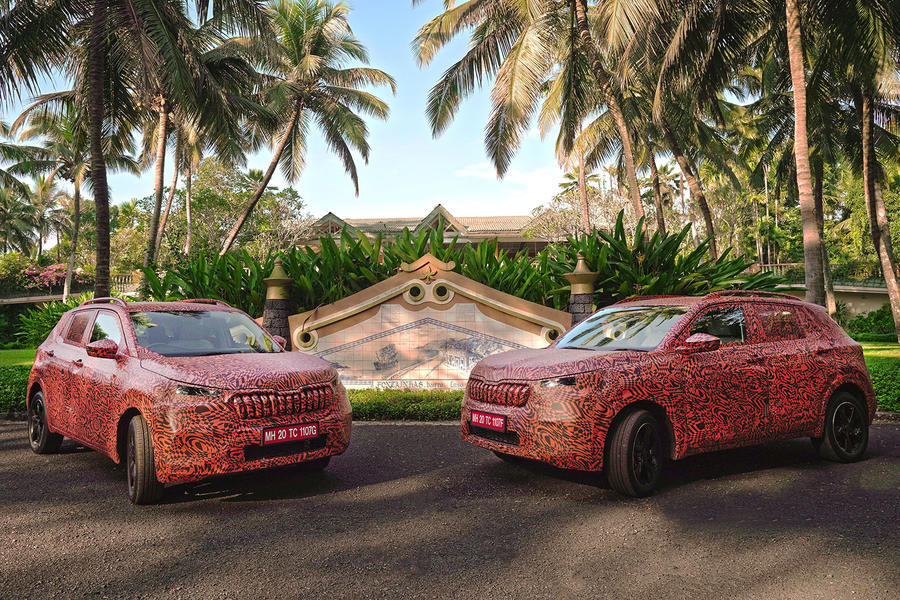 Analysis: Inside the world of the Indian car market

If the car will be made in India, why not rename the manufacturer Skodak?