There has been a lot of talk about the upcoming fully electric version of the Porsche Macan, which is set to arrive in the UK in 2023. Porsche officials have been dropping hints about it for well over a year now and we’ve recently received a series of photographs that expose prototypes of the new model.

But Porsche hasn’t been neglecting the existing petrol-engined Macans. Far from it, as we found out during a drive of a prototype facelifted Porsche Macan, a model now in its seventh year of production.

Seven years. For most car makers, this would represent a full generational cycle and high time for an all-new model. Not for Porsche, though. Sticking to an evolutionary approach it has followed for decades, it has reworked the Macan, giving it a freshened appearance, reworked interior, updated functions and revised petrol engines. The line-up has also been reduced in number.

When order books for the facelifted Macan open in the UK in July, there will be three models: Macan, Macan S and Porsche Macan GTS. The Macan Turbo has been axed, replaced in part by the Macan GTS, which, like all 2021 models, receives a lift in power.

The styling changes are mild. A new front bumper incorporates an air duct shape intended to accentuate width and trim elements within the lower part of the doors gain a different texture. At the rear, a new bumper has a more prominent diffuser. There’s also a revised range of wheels, including the 21in RS wheel on the Macan GTS prototype we’re in, and three new colours, details of which will be divulged at the end of July. 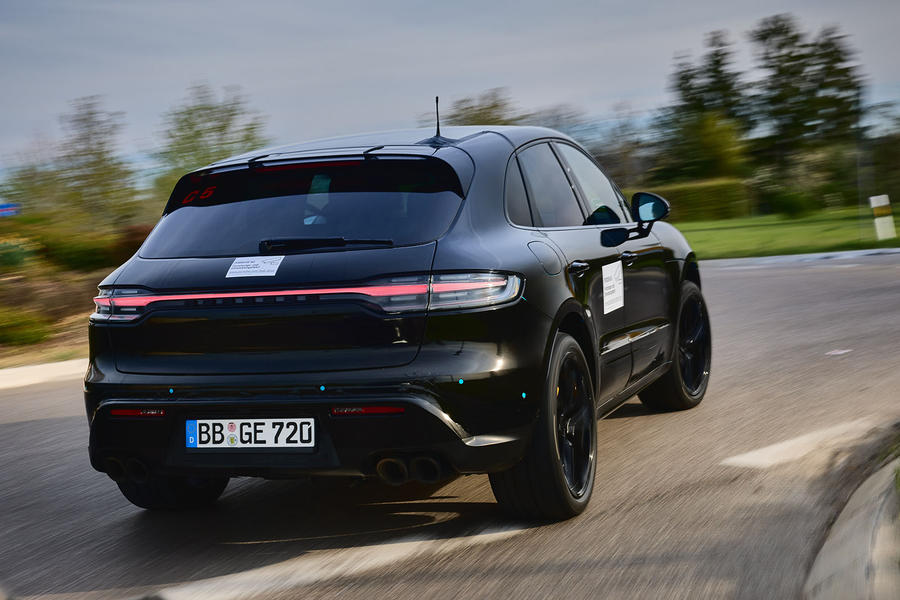 As with the exterior, the changes inside are relatively minor, but they do make for a more pleasant driving environment. Some of it was hidden during our time with the prototype and we weren’t permitted to photograph it in detail. However, there’s a shortened gearlever, a different multifunction steering wheel, new digital instruments and a 10.9in touchscreen as part of what Porsche calls its Advanced Cockpit.

The subtle updates extend to the engine bay. The entry-level Macan’s turbocharged 2.0-litre four-cylinder engine has been reworked and power increases by 20bhp to 261bhp, with torque up 22lb ft to 317lb ft. At the middle of the line-up, the Macan S drops the turbocharged 3.0-litre V6 for a more powerful twin-turbocharged 2.9-litre V6 that produces an added 26bhp, at 375bhp, and an extra 29lb ft, at 383lb ft.

It is the new top-of-the-line Macan GTS that we drive here, though. It receives a more potent version of its existing twin-turbo 2.9-litre V6, whose reserves have been brought up to the same level of the outgoing Macan Turbo’s. With 2.3 bar of boost pressure and a new ECU, there is now an added 59bhp, at 434bhp, while torque climbs by 22lb ft to 405lb ft.

Porsche’s aim with the new Macan GTS has been to provide it with similar performance to the outgoing Macan Turbo but with a more sporting edge. The reworked engine certainly feels more determined than before and its stronger low-end pull gives the Macan GTS a clear boost in accelerative ability. There’s also greater urgency to its mid-range, where it feels wonderfully resolute on the way to the 6800rpm redline.

The performance is effortless and it’s accompanied in Sport mode by an exhaust note that emits an alluring blare under load, together with some cracks and pops on the overrun. Porsche won’t divulge acceleration claims just yet, but expect a 0-62mph time and top speed close to the existing Macan Turbo’s 4.3sec and 168mph in combination with an optional Sport Chrono package. For comparison, the current Macan GTS achieves 4.7sec and 162mph. 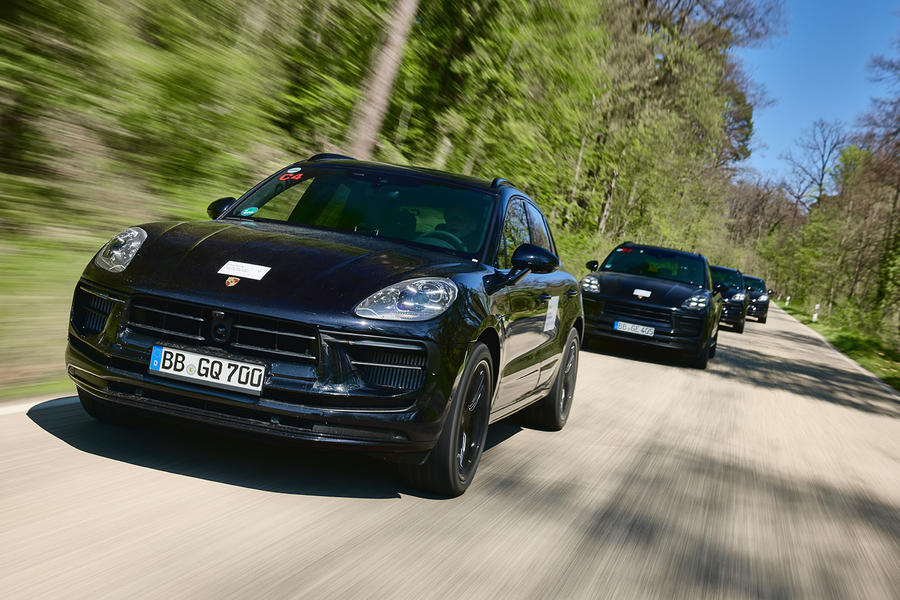 Those who consider the Macan Turbo a little lacking in drama should definitely try the new Macan GTS. It delivers all the real-world pace of the outgoing range-topping model but with a more appealing soundtrack. Less whoosh. More growl.

There’s a relaxed side to it, too. Dial it back to Comfort via the drive mode controller on the steering wheel and it becomes a much quieter and calmer proposition. The spread in overall character at either end of the driver modes is quite marked.

The more engaging properties of the engine are complemented by the performance of the standard-fit seven-speed dual-clutch gearbox. Whether left in automatic or switched to manual, where you can swap gears via steering wheel-mounted paddles, it delivers fast and decisive shifts. It works in combination with a four-wheel drive system to provide the new headlining Macan model with truly outstanding traction.

It’s the handling that continues to set the Macan GTS apart, though. The increase in performance is matched to a chassis that now offers ever-greater response and control than before. There are very few SUVs that you’d consider buying for their dynamic qualities, but this is definitely one of them.

Porsche has done a lot of detailed work here, as is typical. The steel suspension of the old GTS has been replaced by a new air suspension, which is capable of reducing ride height by 10mm in Sport mode and receives 10% firmer front and 15% firmer rear springs than on the previous Macan GTS. The dampers have also been revised. They’re constantly variable units and are claimed to provide faster-altering rates of firmness. The set-up comes in combination with 265/40 R21 front and 295/35 R21 rear Pirelli P Zero Corsa tyres on the prototype that we’re driving here.

The steering is nicely weighted, and probably more involving than you’ll find in any other SUV, imbuing great confidence. The Macan GTS also soaks up lateral forces and resists roll outstandingly well. There’s masses of grip and great poise to the way it corners.

The overall agility is enhanced by the ability of the four-wheel drive system to vary torque between the front and rear wheels and, via a Torque Vectoring Plus function, individually between the rear wheels in combination with an optional GTS Sport Package.

This is quite a heavy car: the Porsche engineers who accompanied us on our first drive hinted at a kerb weight close to the 1925kg of the outgoing Macan Turbo. However, the GTS hides its weight remarkably well and feels a lot lighter than it clearly is. 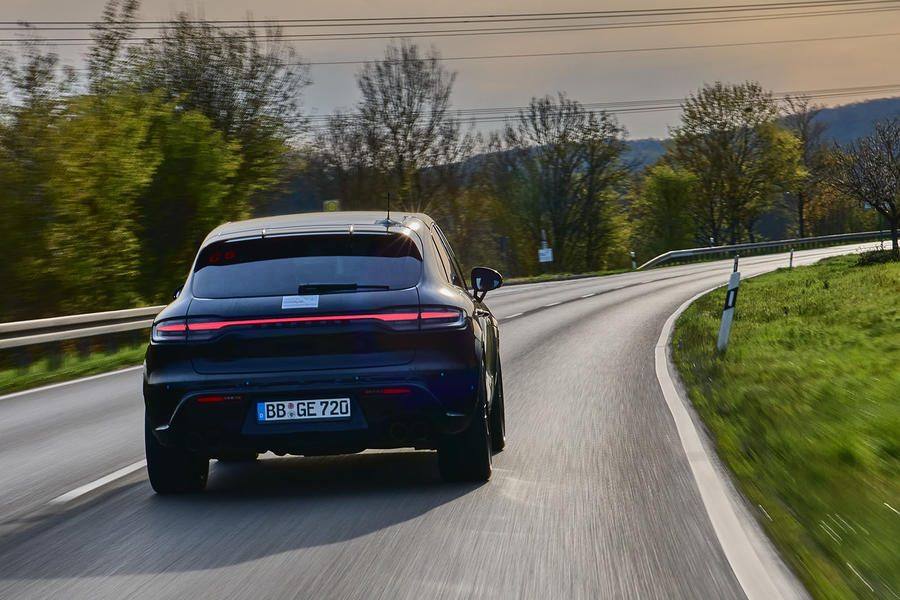 The sporting intentions are reflected in the ride. It’s fine in Comfort mode, where there is a more than adequate level of compliance, but Sport can prove demanding if the road surface is less than smooth. Part of this can be traced to the low-profile tyres, which clearly favour performance over comfort. Still, wheel control over bumps is excellent, so it never becomes unbearably harsh.

There’s a welcome familiarity to the facelifted 2021 Macan. But you can also sense the improvements. There’s an even more technical look to parts of its exterior, and the detailed interior changes give it a more contemporary feel, if no more room, than before.

It’s the driving experience that will win over prospective buyers more than anything else, though. Yes, this is a prototype, and our driving time was limited mostly to travelling in convoy as part of a test team.

However, there is enough evidence in our early sampling of the new Macan to conclude that it continues to exhibit the athleticism more sporting versions of the BMW X3 and Mercedes-Benz GLC try to deliver but don’t quite manage to achieve with the same sort of engagement.

It will be another two years before we see a fully electric Porsche Macan. For the time being, however, the combustion-engine models continue to hold high appeal. Pricing has yet to be announced, although Porsche has told us that the new range-topping GTS will come in at around £6000 above today’s £58,940 model. That sounds like quite an increase, but it will be about £4000 less than you pay for today’s Turbo, which has exactly the same reserves.

Porsche Macan to receive another facelift for 2021