From £71,2209
Light refresh keeps the dynamic SUV at the top of its game until its EV successor arrives.
Open gallery
Close

Porsche used to have a habit of keeping models around forever, giving them a big update every so often, but sticking with the same basic car. The original 911 ran from 1964 to 1989 and the 928 stuck around from 1978 to 1995. The brand is in considerably better financial health these days, so they tend to have normal seven-year model cycles, but the Porsche Macan has been around since 2014 and has just received its second facelift. The reason is that it must hold the fort until an all-new electric Porsche Macan arrives in 2023, and even then, Porsche expects to sell it alongside the newer EV, until 2024.

The exterior revisions are subtle, as is so often the way with Porsche facelifts. The main change is to the front bumper, which has a more horizontal style. The indicators have moved up and LED headlights are now standard, too. The Porsche Macan GTS, meanwhile, appears to be entering a gothic phase and has also broken out the black lip gloss. At the back, there’s a redesigned diffuser.

Inside, the Volkswagen Group’s war on buttons has found its way to the Macan, as the cascade of buttons in the centre console has been replaced by a touch-sensitive and fingerprint-attracting panel. It does look more up to date, and haptic feedback ensures it’s relatively easy to use, but it’s no step forward for usability. The gear selector in the middle is still a physical lever, but it has lost its leather gaiter, exposing the naked plastic.

The mechanical changes appear a lot more substantial. At first sight, at least. The Macan Turbo has been dropped, while Porsche’s press release talks about power boosts for the Macan S and GTS. What has actually happened is that the new GTS gets the old Porsche Macan Turbo’s 434bhp 2.9-litre V6, while the Macan S gets the old Porsche Macan GTS engine – a 375bhp version of the same V6 – instead of the old 3.0-litre unit. At the bottom of the range, the plain Macan retains its 2-litre four-cylinder that’s derived from the Volkswagen Golf GTI’s, but gains 20bhp for a total of 261bhp, thanks to a new turbocharger.

Chassis-wise, the adjustable air suspension that was previously an option is now standard on the GTS, putting the body 10mm lower to the ground, and making it 10% stiffer at the front and 15% stiffer at the rear.

And if all that wasn’t enough, Porsche now also offers ParkAssist on the Macan, so it will park itself if you want it to. 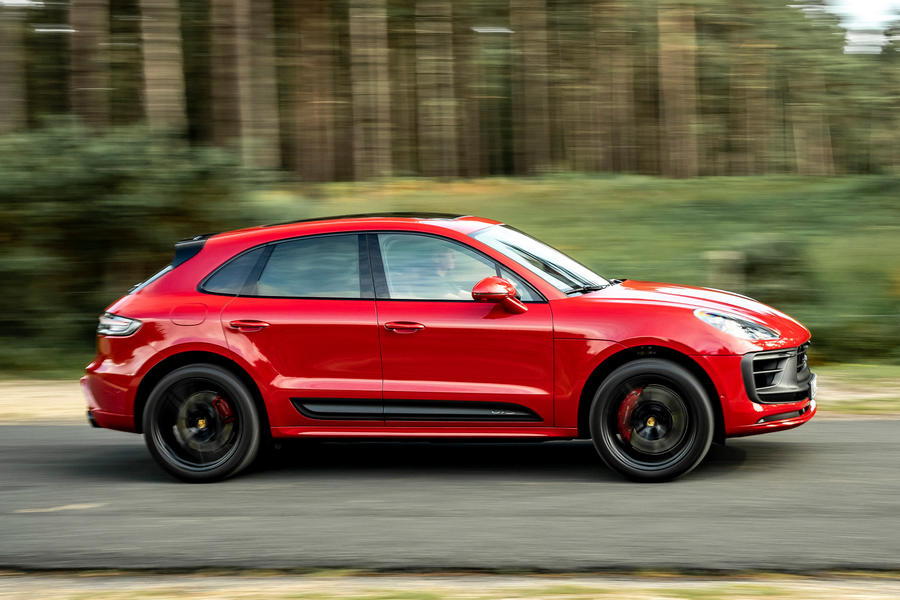 The Macan is very good at making certain things seem obvious. Through a combination of simple decisions, as well as a depth of engineering, it makes you wonder why other carmakers get it so wrong.

Get in and you can sit just like you want to. The optional adaptive sports seats are quite firm, but everything else can be adjusted, from the bolsters to the seat length and pitch, as well as the lumbar support, of course. Same with the steering wheel, which has a thin, firm rim, narrow spokes and very tactile paddles that don’t get in the way during normal driving.

Thanks to the revised air suspension and shock absorbers, the Macan GTS offers a wider range of adjustment. In comfort mode, it’s relatively firm, but because of the quality of the damping it rounds off bad surfaces better than most, it is – on the whole – more comfortable than many more softly suspended cars. There’s a bit of roll, but the stiffer damper modes and the lower ride height setting for the air suspension will expertly get rid of that. They’re all perfectly usable on British roads, too.

Press on and the Macan GTS also does a creditable impression of a hot hatch, despite its almost two-tonne kerb weight and tall body. Nicely weighted steering and plenty of grip give you all the confidence you need, while the torque vectoring makes a tangible difference, firing you out of tighter corners with the unreal sensation of an unseen hand giving you a gentle push. Mat the throttle on the exit of really tight corners and it will even allow enough power to go to the rear for a smidgen of oversteer. If there is one reservation, it’s a slight vagueness in the steering, but the optional Pirelli P Zero Corsa tyres might remedy that.

The interior no longer looks particularly modern, but depending on how you look at it that might not be a bad thing, as the materials, by and large, are still top notch. Just steer clear of the painted air vents, as they look very cheap for a £1,000 option. It’s the same story for the infotainment system. Some of the physical shortcut buttons have gone and it’s not the most modern system out there, but you can do much worse. Not least in other Volkswagen Group brands.

You might expect the performance of a new range-topping Porsche to be the first thing to discuss, yet here we are, at the end. The powertrain hardware is the same as the old Turbo, with the same 2.9-litre V6, but recalibrated for better response and reduced turbo lag. It’s very effective and linear, and emits a purposeful if somewhat tuneless growl with less whoosh than the old Turbo. It's certainly fast, with the launch control function supremely easy to activate, but the competition has caught up and there are plenty of rivals out there with more firepower. Even a Volkswagen Golf R isn’t miles behind in raw performance. 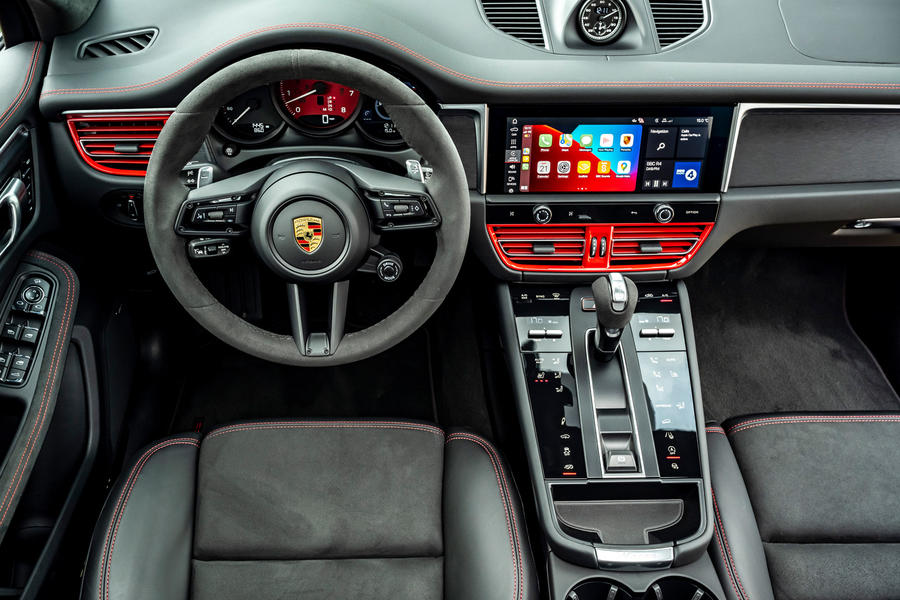 On the other hand, the march of progress has left the fastest Macan in a slight no-man’s land pricewise. The GTS starts at £64,770, making it faster and more expensive than warm SUVs like the BMW X3 M40i and Mercedes-AMG GLC 43, but a little behind the big league of the BMW X3 M and Mercedes GLC 63. Given how good the Macan GTS otherwise still is, that makes it reasonable value in a way, but with mpgs in the 20s and plenty of opportunity to get robbed on the options list, it’s still not exactly a Dacia Duster. 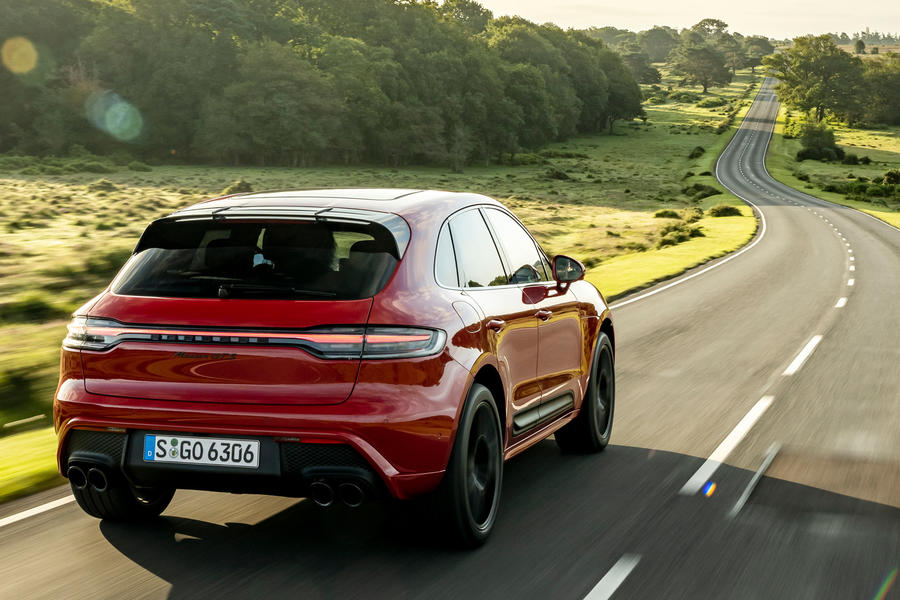 I must admit I like the Porsche Macan although the facelifted front styling is heavy handed and cheap looking and I am undecided on the rear tailgate strip light that connects the rear lights. The original styling design was perhaps more effective. The less said about the black lower side panels (or decals) the better. My main reason for buying a Cayenne and not a Macan is the name. I wish Porsche had stuck with original (development) name proposal Cajun and not the name of a sadly still missing British child. The Cajun (Cayenne-Junior?) moniker was even copyright/patented in advance. Very strange.

sbagnall 1 September 2021
Keep the options to a minimum and the 4 cylinder version offers exceptional value for money as a reasonable sized, quality family car.
jer 1 September 2021

Not sure what happened to the front. Stelvio Quad is faster similar priced real world option. Guess air suspension is an option pasm is Standard would be interested to see how that goes.