Engineers including Sir Alec Issigonis, who once reinvented the Mini Moke as an Arctic exploration device using dual 848cc engines with interconnected throttle cabling, have discovered that two combustion engines in one car is rarely worth the trouble.

Electric motors are proving to be much better suited to this approach, though. They’re easier to package, control and maintain than oily powerplants and offer crushing performance potential when teamed up, which is why spec sheet headliners such as the Tesla Model S and Porsche Taycan have one dedicated motor for each axle.

Independent drive units can also maximise traction or divide their efforts so that neither strays too often from its window of efficiency and therefore saps precious range. And as manufacturers are rapidly learning, control of individual axles can, if your engineers are clever enough, give even the most battery-bloated chassis an intravenous hit of agility.

At Audi, they’re cleverer than most, and so the E-tron S Sportback, seen here as a prototype in light camouflage but due to arrive in the spring, uses no fewer than three electric drive motors. The fastback SUV will be the first S-badged electric car to leave Ingolstadt, with the traditional increases in performance and handling.

Compared with the existing E-tron 55 quattro, whose MEB Evo platform has been carried over, the wheel-and-tyre package has been beefed up, as have the by-wire brakes and the cooling, while the air suspension has been tuned for even closer body control. Expect prices to start beyond £80,000, compared with £59,900 for the E-tron 55. 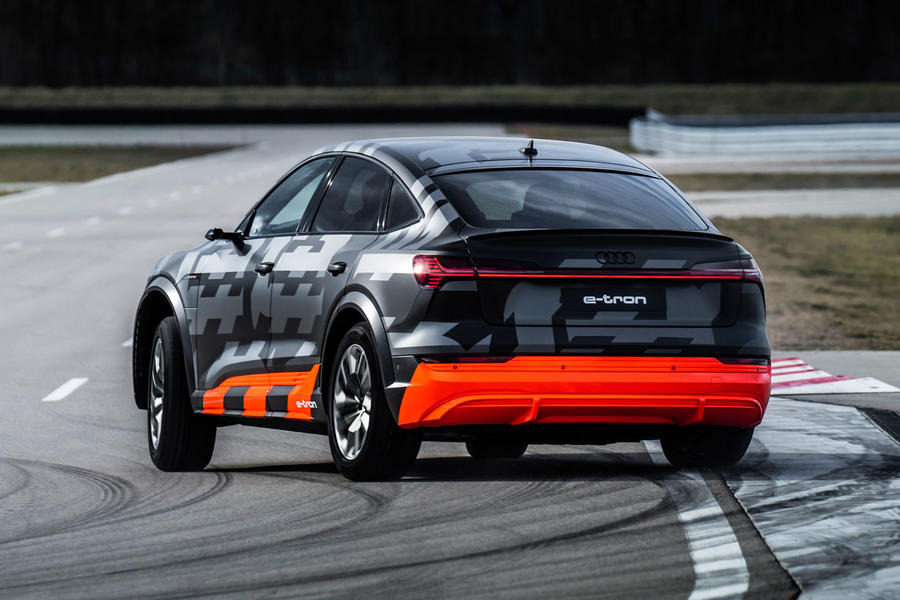 The biggest difference, however, is the additional electric motor. Instead of one motor driving the rear axle, as found in the E-tron 55, there are two in the E-tron S: one for each wheel, à la Polestar 1, and each with its own single-speed gearbox.

This paves the way for ultra-precise torque-vectoring with, in Audi’s words, a high level of transverse dynamics. Or, in our words, improbably big skids if the car is in Dynamic driving mode with the stability control system set to Sport or, better still, entirely off.

Audi claims this system can distribute torque in a quarter of the time needed by any mechanical counterpart, such as the Sport differential in the new RS6 Avant, and during cornering can feed up to 162lb ft more torque to the outside wheel than the inside – far more than the 10% difference possible with the clutched Sport differential.

Furthermore, the electric torque vectoring system isn’t finally spurred into action only at the very limit of grip, and then with no true control over which direction torque is sent, as is the case with a regular limited-slip differential. In theory, the satisfying sensations of apportioning torque to the outside rear wheel can therefore be felt by the driver at any time. 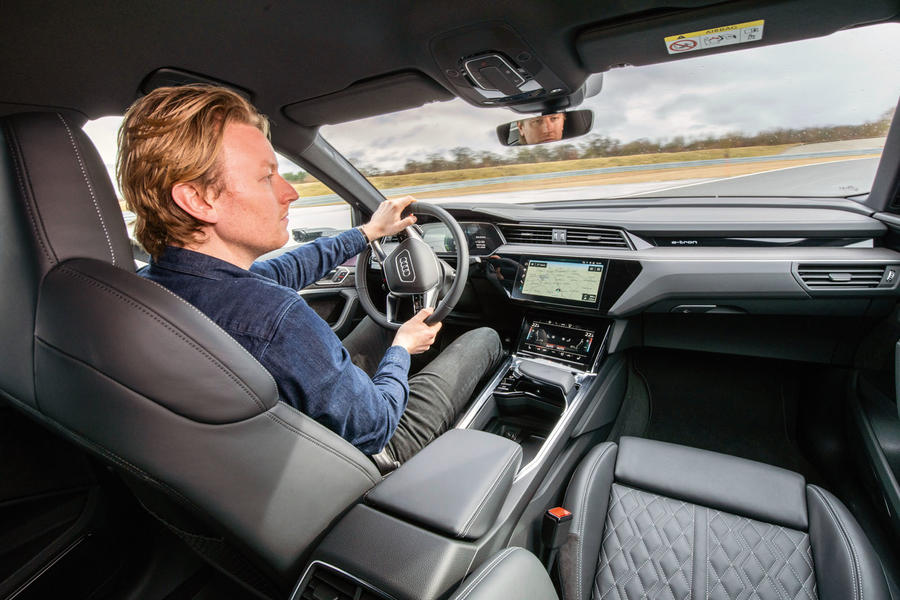 The front axle is more conventional, with nothing more complicated than brake-based torque vectoring, but the long and short of it is that this tri-motor set-up, combined with Audi’s central control unit, can replicate the functions of the Sport, limited-slip and Torsen differentials, only faster-acting and all of the time. Issigonis would no doubt be impressed.

Meanwhile, total power for the E-tron S is up from 403bhp to 496bhp, with the larger front motor (the same as can be found in the tail of the E-tron 55) accounting for 201bhp and the two shorter rear motors, which are cradled back to back within the subframe, together making 354bhp. Total torque is an outstanding 718lb ft, with 456lb ft of that reserved for the rear axle.

Our chance to test this driveline came at Audi’s facility in Neuburg, near Munich. This is where its racing machines – including the R8 LMS GT2 and previous LMP1 cars – are shaken down for the first time, hence the generous grass and asphalt runoff (although this could equally be for the benefit of visiting journalists).

Unsurprisingly, even the colossal torque of three electric motors meets its match with a car that weighs more than 2500kg before you’ve even factored in passengers. So while the E-tron S gets off the mark briskly, from then on it feels no more than Volkswagen Golf R quick. However, what you do genuinely notice is the subtle rear torque bias during lightly committed driving, because from the moment you turn the wheel, the front axle mainly devotes itself to brake vectoring rather than propulsion and the rear axle’s torque vectoring simultaneously comes into play. 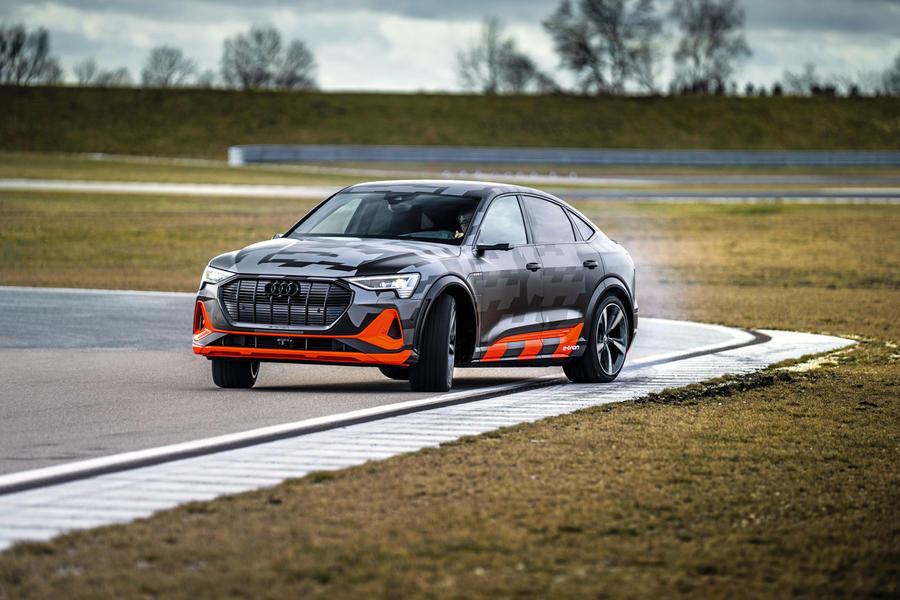 The real surprise comes when you attack a corner. Neither the brakes nor the slick but soulless steering inspire too much confidence, but once the nose has securely taken your chosen line, the E-tron S will essentially oversteer on demand as the outside rear wheel is overloaded with torque. More surprising still is how neatly and predictably this happens, and one can’t help but imagine what this technology might one day do for, say, a TT-sized coupé with friendlier proportions and less weight to cart around.

Another striking characteristic of the system is that there’s almost no initial understeer to push through before the rear axle starts to swing, as is almost always the case with combustion engines, needing a moment to coalesce their efforts. In this respect, the E-tron S feels a little unnatural – binary, frankly – but massively effective and enjoyable all the same. Too much angle and the rollover electronics grip the chassis in a protective vice, killing the slide.

But the cat is out of the bag: if Audi can make a tank of a car like the E-tron S Sportback handle this sweetly, an electric Porsche Boxster suddenly seems an immeasurably more enticing prospect.

Why is oversteer such a big

Why is oversteer such a big thing for motoring journalists? In my 28 years of driving I could count on one hand the number of times that I had a car sideways (on private property). Yes it can be fun if you can anticipate what the car will do but I bet that at least 70% of people who will buy this car would probably panic if 2500kg of car decided to go sideways!
Rtfazeberdee 22 February 2020

Why is oversteer such a big thing for motoring journalists? In my 28 years of driving I could count on one hand the number of times that I had a car sideways (on private property). Yes it can be fun if you can anticipate what the car will do but I bet that at least 70% of people who will buy this car would probably panic if 2500kg of car decided to go sideways!

Basically, immature adults who think they are being clever. Its the same with 0-60, 0-100 times. Instead, some of the main things they should check are overtake times and stopping distances if they wanted to be real journalists. Its time they stopped trying to see who can piss highest up the wall in their childishness reporting.

I'd love to see an Audi TT sized electric coupe. The back seats might have to be given up for more battery space, but that is a small loss on that car.

Really? Its so nice to read such unbiased journalism.

As Leslie Brook says, I'd be much more impressed if manufacturers spent time and money concentrating on the things that matter to most of us, rather than these rich persons playthings

'At Audi, they're cleverer than most'.

Completely disgraceful journalism. In fact not journalism at all - just advertising.

Don't be so ridiculous...

'At Audi, they're cleverer than most'.

Completely disgraceful journalism. In fact not journalism at all - just advertising.

... it's not meant to be taken literally, you silly little boys.

..when it came to emissions regulations it transpired, would you trust anything VAG tells you?

They all tell lies. It's called marketing.
View all comments (4)